There was an interesting article about airlines in The New York Times last week, “When Flying 720 Miles Takes 12 Hours,” but the subtext was all about CRM, or at least where CRM has to go. If you know me at all, you know I closely attend to macroeconomics and energy issues, and they are all over this article.

The story documented how small regional airlines are having trouble in an economy where fuel prices are rising and there are fewer passengers willing to pay higher prices. The typical response you’d expect in such a situation is some combination of reducing the supply of seats and raising prices to enable the carriers to at least break even.

The article shows both, but this is not a simple exercise from econ 101. Higher prices and fewer flights signal stress on the economy because less business is getting done, and that’s a downer, economically speaking.

A few years ago a Forbes editor, Chris Steiner wrote “Twenty Dollars a Gallon: How the Inevitable Rise in the Price of Gasoline Will Change Our Lives for the Better,” which postulated what might happen to the economy as fuel prices rise. We’re right on time with his predictions, but I think there will be much change and dislocation before we see the promised land.

With fuel heading for five bucks a gallon, we are seeing mergers and acquisitions of sick air carriers along with fewer feeder routes, according to the Times article and Steiner. As prices continue to escalate, we’ll see fewer short hops and fewer long-distance routes as airlines try to hang on.

But also, Steiner thinks places that exist on the end of an umbilical cord filled with jet fuel — Las Vegas, vacation destinations (think ski areas and islands in the sun) — will see a decline in the traffic that brings tourists and their cash. The immediate fallback position is cars, but gassing up a car that gets 12 or even 20 miles per gallon has already gotten old.

The secondary default position will be to get serious about alternatives, and since trains and new cars or especially more hybrids are an expensive proposition, the next step won’t be travel alternatives but conservation in the form of travel reduction.

Just a few weeks ago, people were talking about the resurgence in U.S. oil production. We went from producing 4.95 million barrels of crude per day (mbpd) to pumping 5.75 mbpd, and French champagne started flowing. But the sad reality is that we need 19.2 mbpd, every day, and while 5.75 mbpd is nice, even getting up to the 9 or 10 mbpd optimists predict would be nice but would still leave us quite a bit short. And those are today’s numbers; they make no accommodation for growth.

Even worse, in 2007, just before the financial meltdown, U.S. crude demand was 20.7 mbpd meaning that the recession has done as much to reduce demand as drill baby drill has done for supply. I dare say reduced demand will be easier to come by than increasing domestic supply.

When we think we have spare capacity, we lose track of the longer-term need for alternatives and we stick with what we know. That’s one reason we don’t have a more aggressive energy and transportation policy. But when we’re feeling sanguine about energy, we’re also riding an economic roller coaster up and then down because higher prices inevitably choke off growth. So we find ourselves in a position where the economy gets a little better then a bit worse, with the peaks never reaching the previous troughs and the moving average is ever downward.

Alternatives do not simply mean smaller cars or windmills. If you can find a way to do business with fewer energy inputs, you could call it conservation, but in reality you are developing an alternative path to profits, and that’s where CRM can add so much.

First off, the huge move toward social technologies is one example of using alternatives. Social (along with analytics) enables us to communicate with and understand customers without jumping on a plane or into a car all the time for a face-to-face meeting. But there’s more. We are rapidly approaching a time when the videoconference has to replace at least some face-to-face meetings. Video conferencing can be easily built into CRM applications, and as a stand-alone it is a great way to communicate with people.

Some companies are using video conferencing to knit together enterprises strung together across time zones and supply chains. Others are embedding video chat into customer service — another good practice because it produces a more intimate interaction and improves the customer experience.

Companies are looking over unified communications solutions right now, but few seem to have the interest in pulling the trigger. That’s to be expected. Big companies like AT&T, ShorTel, Siemens, Cisco and Microsoft are offering solutions, though I don’t know any CRM vendor with an eye on the subject just yet. It’s too bad, because I think unified communication is where social was about five years ago — on the periphery but moving inexorably into the CRM suite.

Given unified communications’ upside and relatively modest downside, it’s a wonder to me why more companies — vendor and customer alike — are not swarming this solution class already. Business is a game of thrust and counter thrust, and everyone must be ready for change or risk being road kill. This is our next challenge, and CRM is right in the middle.

BPM and CMOs: A Match Made in Heaven 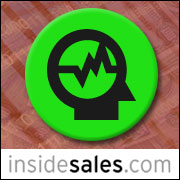 Insidesales.com Aims to Keep Leads on the Front Burner