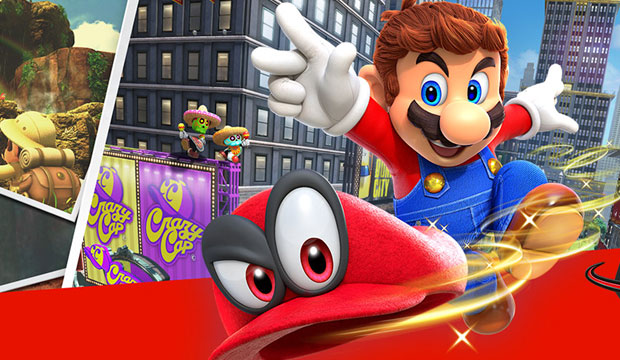 Nintendo appears to have knocked it out of the park with Thursday’s offical launch of its new Super Mario Odyssey title, which appears to have won over video game critics and promises to drive Nintendo Switch sales well into the holiday shopping season.

The reception is another lift for Nintendo, which has been riding high following strong reviews of the title at the E3 conference earlier this year, and the success of its latest Zelda title, The Legend of Zelda: Breath of the Wild.

The new sandbox-style Super Mario Odyssey has been the focal point of a whirlwind national tour, with Nintendo executives traveling to nearly every corner of the United States, from Los Angeles to New York’s Rockefeller Center, where a splashy celebration accompanied the launch.

In Super Mario Odyssey, Mario and his new side buddy Cappy travel far and wide on immersive adventures that take advantage of the Switch’s Joy Con motion controllers and portable console experience.

The tight controls, creative platforming and gorgeous art found in Super Mario Odyssey represent “one more step in the right direction” for Nintendo and “another evolution of a perfect formula,” wrote Aaron Soupporouris for Engaget.

Strength of the Mario Franchise

Overall, Super Mario Odyssey appears to be one of the best-reviewed gaming titles of the year, and sales are expected to start strong and continue into the holiday season.

“It’s been highly anticipated by the existing fans,” said Karol Severin, an analyst at Midia Research.

“It’s been having fantastic reviews so far, and there is always the appeal of having a new character for the fans to explore, as well as new and engaging locations designed to surprise and delight viewers,” he told TechNewsWorld.

Super Mario Odyssey likely will be one of the top five best-selling games of the holiday quarter in the U.S., said NPD Group analyst Mat Piscatella, bringing in more than US$100 million in retail sales, with digital sales adding more than 20 percent to the mix.

It is the primary software driver for Nintendo Switch, he told TechNewsWorld.

However, there’s no sign of an end to Nintendo’s fulfillment issues, Piscatella noted, and inability to keep up with hardware demand could affect sales of the game.

The Switch has been the primary driver of industry hardware sales increases so far this year, he pointed out. The Nintendo hardware has been coming in second in dollars spent, behind Sony’s Playstation 4 — but that’s mainly due to continuing supply constraints.

Based on demand, Nintendo Switch unit sales could reach 4.2 million in the U.S. by the end of 2017, Piscatella said — but that number could be far off due to the fulfillment issues. If the Switch should reach that 4.2 million figure, that would exceed unit sales for the Wii during its first 10 months in the market.

The title is going to drive sales for consumers who may not have been hardcore gamers, but were fans of the Wii, he told TechNewsWorld.

The Switch hardware already has been a huge success, Pollak said. “You’re getting some upgrades from folks who were Wii owners — they were not necessarily hardcore Mario or Zelda fans.”

Demand also is strong from customers who may be in households that normally would battle for control over a single television in the living room, he suggested. The portable nature of the Switch allows gamers to disengage. They can enjoy the immersive experience on their own schedule in a variety of settings, whether it’s another room in the house, or riding in the back of the family car.

While most of critics fell hard for Super Mario Odyssey, one reviewer at Kotaku raised some concerns about the ability to use motion controls to operate key features of the game while in handheld mode.

Shaking the motion controllers in handheld mode could make it difficult to maintain visual sight of the game, wrote Editor-in-Chief Stephen Totilo.

“You’ll want to do a higher jump and you’ll have to hoist the whole unit,” he pointed out. “You’ll be surrounded by enemies and want to do Cappy’s orbit attack and you’ll need to shake the controller enough that you might lose sight of the on-screen action.”