It is amazing to me the number of people I know who are basically saying Steve Jobs (some wonderful quotes from him here) leaving Apple will not change Apple. Most saw what Apple was like with Jobs, have seen that no similar company has been able to repeat what Apple has done over the last decade, and have seen both Microsoft after Gates and Disney after Walt. They even saw what happened to Dell during the short time Michael stepped down. But Jobs, who is even more hands on than the most-micro manager any of us know, will pass without a ripple. Wow — now that is a reality distortion field.

The song that is going through my head goes, “Bye, bye, Miss American Pie, took my Chevy …,” and it is titled, “The Day the Music Died.” I’ll share what I think Steve’s truly lasting legacy is for life in general. I’ll close with my product of the week, an offering from Sony that shows the unique difference that Jobs brought to his products.

You take out of the mix a guy who is a known micromanager and who rules a company largely using fear, and the firm is changed. Arguing it isn’t is like, well, taking a leg off a chair that is wobbling and arguing the three legged chair is as good as new. Except with Steve Jobs, given how much he touched, it would be more like two legs.

For instance, take a look at the patents that Jobs personally touched. There are 313 of them on critical Apple products, most having to do with the look and feel of the offering. Whether or not they would have existed could be argued; whether they would have been the same can’t, because he touched and changed every one, and his was the vote that counted at the table.

He isn’t a guy that offers up a suggestion as an option — he is the guy who says “this is the way it will be.” If he truly touched each of these products, he had a significant impact on what the outcome was.

The Nature of the Change

Looking back at Microsoft, Disney and even IBM, the first-year changes were typically rather subtle. Disney and IBM were a bit more sudden, because Walt died and Thomas Watson Jr. stepped sharply away from the company. Bill still showed up a few times to speak on behalf of the firm. However, inside the companies, the changes were far more noticeable far earlier, as the new management took control.

At Disney, it was a massive influx of MBAs and outflow of undegreed founding employees. At IBM, it was a hard shift to financial controls and a sharp move away from hands-on employee management. At Microsoft, it was the evaporation of a driving vision.

What typically happens when a micromanager leaves is an increasing degree of rebellion against that now-absent micromanager. Micromanagers rarely explain the why behind their decisions, and Jobs isn’t exactly famous for explanations. They just demand they be followed, and that means skills don’t transfer. In fact, micromanagers, by their nature, don’t really want skills to transfer because they equate control with status — and if you can do it yourself, they see that as a lack of control.

While this only ensures that Apple will be different, think for a moment — how many firms are doing as well as Apple is? If you are into sports — I’m not, really — and recall the 49ers football team used to be unbeatable and now is anything but, do you recall what changed? Ownership of the team passed between brother and sister in 1999, and the team was pretty much done from then on. That’s the same as changing the CEO but leaving the employees in place — and we are talking siblings.

Clearly, this idea of Apple suddenly going into printers as the new growth market is farfetched, and intended to be, but the firm is unlikely to be able to maintain its status at the top of tech — let alone where it is today, which is almost over every other company in any market.

Certainly anything is possible, but looking at other firms that have had a transition like this, only IBM held on for a long time and only because it was designed by two generations of founders to outlast both.

A lot of us have different views about what Jobs legacy will be. It won’t be the ads, though some are clearly iconic. I don’t think it is the products. Did you know that IBM used to make cheese cutters, for instance? How many people even remember the first product that put Apple on the map, the Apple II? It isn’t really the company either, given it was created by a number of people; while redesigned around Jobs, it will undoubtedly change a lot over the next decade and might either do major acquisitions or become acquired at some future point. The point is that Jobs’ fingerprint on something that is largely based on a lot of changing employees is likely already disappearing with every post-Jobs hire, in any case.

I think it is the content in the Apple University (note the info-graphic clearly shows a change in Apple stock performance when Jobs isn’t there), which is overseen by Jobs, led by people who understand him, and attempts to pass on Steve’s process to future generations.

If successful — and note that Jobs is in the loop for consistency/compliance and doesn’t really have a replacement — this could limit, much like the IBM University does, how much of what Steve Jobs provides in terms of process is lost. It could cause a core part of Jobs’ unique capabilities to continue after he is gone — perhaps for generations.

Sun Tzu has been dead for thousands of years, and he is still required reading in military and business courses. People, products, companies and countries pass, but knowledge is often sustained. Steve Jobs’ unique approach to product strategy — and it really is product strategy — could outlast the country, let alone Apple. And I think it should, because it is that brilliant.

Steve Jobs historically has talked about two companies he modeled Apple after: Porsche in terms of product design, and Sony in terms of consumer focus and product strategy. To me, that means if any company could beat Apple in its core market, Sony should be able to, because it was a big part of Apple’s successful redesign.

Currently, the closest thing Sony has to a current generation MacBook is the Vaio Z. It is light, it is sexy, in many ways (on spec) it is truly better than a MacBook — particularly if you are, like me, a Windows user. 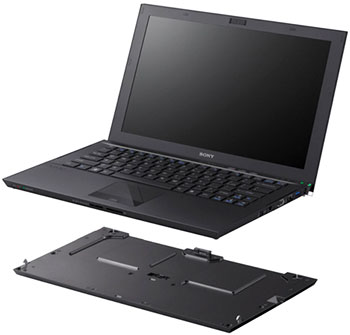 This Vaio compares to the 13″ aluminum MacBook Pro, and it stands out with many more choices. That asset is where its problem lies, though, because that likely drove up cost and limited its market.

But let me give you the high points. Instead of aluminum alone, it is built up of graphite and aluminum. Instead of just a built-in battery you can’t replace, it has an optional external battery (up to 16 hours of battery life vs. a good 7) that can be hot swapped and charged alone (this last is really unusual, even in Windows boxes). Instead of 1280×800 native resolution it has 1600×900 or an upgrade to 1920×1080 resolution. Instead of one hard drive, it can have twin SSDs. It has an optional dock and a built-in fingerprint based security system the MacBooks lack, and instead of 4.5 pounds, it comes in (without the slice) at an amazing 2.5 pounds (even with the slice it is about a full pound lighter).

However, all of this doesn’t come without a cost. This little puppy will set you back between US$1,799 and $2,200 (retail), while the MacBook is between $1,200 and $1,500. Both products would be considered premium offerings, and clearly the Sony would be more exclusive. For the extra $700, you get what is likely a far more useful result, but you are in nosebleed pricing territory, and you can’t get to high volumes there.

The Sony would appeal to folks who like to mess with things and represent about 5 percent of the market. The Mac would appeal to folks who just want to get things done — or more like the other 95 percent — and both are priced out of the mainstream. Apple forces people to buy higher in the market; Sony would suggest a different lower-priced product for most (like the $625 VPC-S135X/B). The end result is Apple has fewer SKUs and higher margins, while Sony has more products.

As a customer who favors this product, I like Sony’s approach; as an investor, I’d prefer Apple’s. These two products showcase, more than any other thing I can think of, what makes Apple different. It builds a product that is aspirational for most people and focuses on maximizing margin. Others, like Sony, try to maximize total volume by trying to meet existing and very diverse product needs.

In the end, I can’t think of any other product in the market that is likely to give a new Mac owner a little product envy, I certainly have a bit of lust in my heart for this puppy. Because of that — and mostly because it drives home the point of just why Apple is different — the Sony Vaio Z is my product of the week.

One final thought: Ultrabooks, the platform Intel will be bringing to market later this year, are very similar to the System Z and will likely highlight Windows 8 next year. They will also price on top of the MacBooks. That will make things more interesting shortly. You know, the biggest change may be that without Jobs, Apple just doesn’t seem unbeatable anymore.