Splatoon: Nintendo Hits You With Its Best Shot 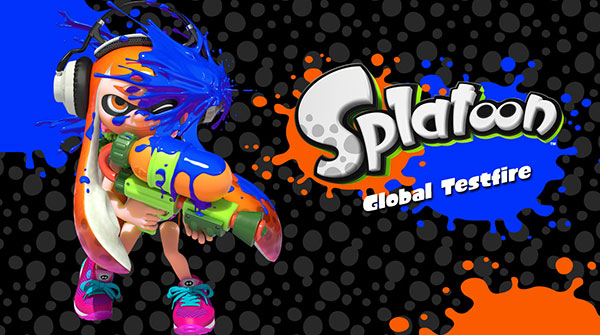 Nintendo has invited players to paint the town red — and green and blue and a palette of other colors — in Global Testfire events over the weekend for Splatoon, a new game launching May 29 exclusively on the Wii U.

The Testfire events will provide three hour-long windows to try out Splatoon and provide Nintendo with the server stress-testing the game will need for a successful launch. The first Testfire event takes place from 8 p.m. to 9 p.m. PT on May 8. Two more windows — 4 a.m. to 5 a.m. PT, and 12 p.m. to 1 p.m. PT — are scheduled for May 9.

Splatoon is Nintendo’s take on the oversaturated shooter genre. Instead of seeking to put a new spin on a formula consisting of military weapons and global conflict, however, Nintendo is releasing an all-ages shooter that oozes the company’s beloved charm.

In Splatoon, player characters, “Inklings,” work together with their teammates to paint entire areas with their team’s colors and to splat any opposition they encounter. The opposing team’s objective is the same.

Weapons and level traversal play large roles in giving this vividly colored shooter its own identity, one worthy of inclusion in Nintendo’s library.

The weapons consist of various paint tools, such as rollers and spray guns. The effectiveness of any given weapon will depend both on the stage and the situation.

The Inklings are squid-like characters that can take on human form. Their squid-like form enables them to quickly swim through any area painted with their team colors.

Splatoon will launch with five Turf War stages, but that’s just the start. Nintendo plans to release more stages for free, as well as new game modes, additional weapons and more gear over the life of the game.

At launch, Splatoon teams will be shuffled after each round. In August, Nintendo will release a major update that will bring new matchmaking options and will allow friends to stay on the same team for as long as they want.

As Nintendo prepares to move to new hardware — the Nintendo NX console — there have been some worries that the company could lose the focus and passion needed to continue innovating on the Wii U.

Splatoon has been in development for years, but the success of the game could drive Wii U sales forward and birth a franchise whose characters are worthy of inclusion in the all-star lineup of a Super Smash Bros. game.

With its absence of visceral violence, the game could enjoy success on the Wii U, according to Ted Pollak, senior analyst for the game industry at Jon Peddie Research.

“I think Splatoon is a wonderful way to experience the thrill of a first-person shooter without some of the hardcore, violent elements,” Pollack told TechNewsWorld. “I think parents will like this, and it could possibly stimulate the sales of some console units.”

While Splatoon may enjoy remarkable success, Nintendo looks like it will continue treading water until it releases a new console, suggested Rob Enderle, principal analyst at the Enderle Group.

Nintendo had an opportunity to really capitalize on the exercise genre, with titles like Wii Fit, but the company didn’t continue to iterate on the software or provide new fitness hardware to accompany it, he pointed out. Where that leaves Nintendo now is needing several new innovations to capture the portion of the gaming market that isn’t secured by Sony and Microsoft.

“Given how many people are playing low-end games right now on their tablets, the opportunity for doing something at the low end of the market is closing off,” Enderle told TechNewsWorld. “They’re going to have to think of another way to target this base.”