Researchers using the United States Department of Energy’s SLAC National Accelerator Laboratory at Stanford University have created an experimental switch that goes between on and off in one trillionth of a second.

This was done by blasting samples of magnetite with a laser to rearrange their atomic structure. 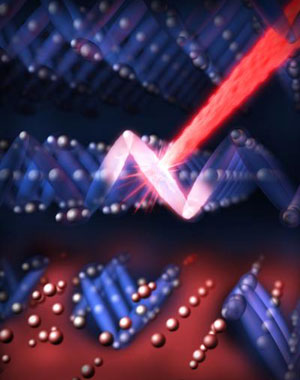 An optical laser pulse (red streak from upper right) shatters the ordered electronic structure (blue) in an insulating sample of magnetite, switching the material to electrically conducting (red) in one trillionth of a second. (Credit: Greg Stewart/SLAC)

The scientists then used ultrabright, ultrashort X-ray pulses to measure how long it took for the switch to go from off to on.

The experiment is one of several undertaken by researchers worldwide to find an alternative to silicon as the semiconductor industry runs up against the limits of Moore’s Law, Jim McGregor, principal analyst at Tirias Research, told TechNewsWorld.

“We’re running up against size and cost limitations and will have to eventually move beyond silicon,” McGregor said. “What and when that will be is highly debatable, but by 2025 it may be a requirement.”

The researchers first cooled samples of magnetite to -190 degrees Celsius to lock their electrical charges in place.

They then used a visible-light laser on the samples of magnetite to fragment their electronic structure at the atomic scale.

This rearranged the structure to form non-conducting “islands” surrounded by electrically conducting regions, which formed hundreds of quadrillionths of a second after the laser beam hit.

The scientists then used SLAC’s Linac Coherent Light Source X-ray laser to direct ultrabright, ultrashort X-ray pulses at the magnetite to study the timing and details of changes in the samples following the laser pulse.

Adjusting the intervals of the X-ray pulses let the researchers measure how long it took the magnetite to shift from an off state to an on state, and observe the structural changes that occurred when it happened.

Developing high-speed switches identifies the fundamental materials processes driving the switches, among other things, Herman Durr, principal investigator of the LCLS experiment, told TechNewsWorld. “There are often competing processes that happen on different timescales that can be studied and ultimately controlled this way.”

The researchers are conducting follow-up studies on high-quality, ultra-thin structures of Vanadium dioxide, which demonstrates an insulator-metal transition above room temperatures, Durr said.

In other words, they work as on-off switches above room temperatures, which makes them more practical than magnetite.

Using oxides in transistors could make them more efficient, but the industry needs to go beyond semiconductors, Durr said. “My group, myself and many other researchers … want to understand the non-equilibrium phases that are generated by laser or electric field excitation of oxide materials. There, something new could happen that could be useful for IT, [and] our article is the first inkling of this.”

It’s widely agreed that the semiconductor industry is fast approaching the limits of Moore’s Law, which says, in effect, that the number of transistors on integrated circuits doubles roughly every two years.

In 2010, the International Technology Roadmap for Semiconductors forecast that after 2013, transistor counts and densities would double only once every three years. More recently, AMD said that the amount of time taken to transition from 28nm to 20nm processes signals that Moore’s Law is coming to the end of its life. Broadcom stated in May that the end will come in about 15 years.

“As we go down to 14nm, we’re having to put a lot of Band-Aids on manufacturing processes,” Tirias’ McGregor pointed out.

“We have to do simpler design constructs, double patterning, and we may have to go to multipatterning and other steps that increase the cost of manufacturing, whether in time, cost or power.”

“By the time you get to 5nm, you will run up against serious physical limitations,” McGregor continued. “We’ve improved the three major pillars of semiconductor production — lithography, materials and design. Now we’re adding packaging, but that will only help extend Moore’s law — it doesn’t solve the issue.”