SpeechJammer: Big Brother Is Shushing You

The First Amendment is meant to protect freedom of speech, but a new device could thwart it — not through censorship but by affecting the brain’s cognitive processes. The SpeechJammer gun could thus prevent a shot from being heard round the world.

In George Orwell’s seminal novel 1984, the Ministry of Truth controls news, entertainment and information, while the Ministry of Love is there to monitor, arrest and convert dissidents, real or imagined. However, even Orwell and his fictional ministries could not have imagined a potentially more sinister device — the SpeechJammer gun invented by two Japanese researchers.

Kazutaka Kurihara of the National Institute of Advanced Industrial Science and Technology, and Koji Tsukada of Ochanomizu University, have created a handheld device that reportedly offers the ability to “jam” the words of a speaker. 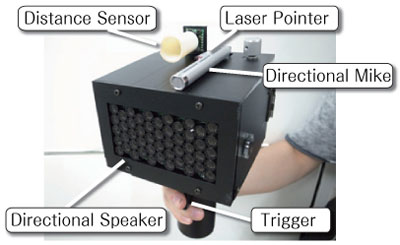 This technology, which is still in prototype, combines a direction-sensitive microphone with a directional-sensitive speaker and has the ability to disturb the speech of a targeted person. It works by recording the speech of an individual and after a short delay of about 0.2 seconds playing it back. This causes the Delayed Auditory Feedback (DAF) effect, which is known to interrupt speech.

“This effect can disturb people without any physical discomfort, and disappears immediately” when one stops speaking, Kurihara and Tsukada note in their report on the technology titled, “SpeechJammer: A System Utliziing Artificial Speech Disturbance with Delayed Auditory Feedback.”

“Communication is the most important means of resolving conflict,” say the researchers, but “there are still many cases in which the negative aspects of speech become a barrier to the peaceful resolution of conflicts, sometimes further harming society.”

Not everyone is so quick to agree.

“It is really jamming is what it is,” Billy Pidgeon, principal analyst at M2 Research told TechNewsWorld. “I’ve seen some of this technology so I’m not surprised. The beneficial use, if that is what you want to call it, is to maintain quiet in a particular zone or room.”

This is one of the uses where Kurihara and Tsukada claim the SpeechJammer could find a valid purpose, but Pidgeon says there are more ominous possibilities.

“Here we are seeing science fiction becoming a reality,” said Pidgeon, “and here is one that [could] possibly even be weaponized in a way.”

It could be used simply to silence anyone the user disagreed with or potentially lead the way to confusing others or influencing them in worse ways.

Even if it doesn’t end up being a weapon of mass destruction, it could play havoc in other ways, Pidgeon suggested. A seemingly harmless prank could have unintended consequences.

In this respect, it evokes memories of the 2008 Consumer Electronics Show, when bloggers from Gizmodo used the TV-B-Gone IR jammer to disrupt some press conferences. It may have seemed like harmless fun at the time, but in light of the time and money companies invest in trade shows and press events, it became a big deal.

The SpeechJammer could take this sort of mischief to a new level, especially during a political election year.

“This might start out as expensive technology that could be only be employed by large institutions, but in the hands of the Everyman it could become quite dangerous,” said Pidgeon. “If you can take and send back the speech, what is next? Changing what someone actually says?”

The Ministry of Truth could only envy such power.