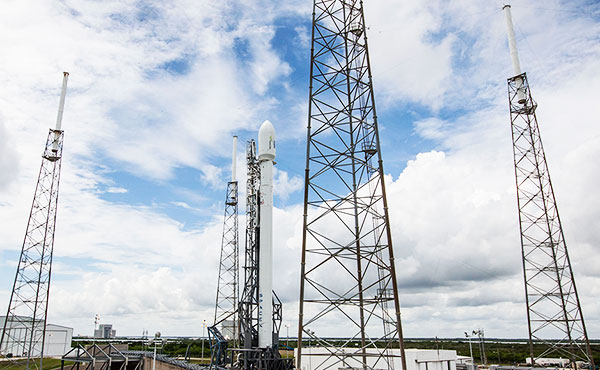 SpaceX next week will attempt a feat with odds of success of just 50 percent. Specifically, it will try for the first time to land the first stage of a Falcon 9 rocket on a custom-built ocean platform in the Atlantic Ocean.

The experiment originally was scheduled to take place in mid-December but was postponed to Jan. 6.

The Falcon 9 first stage is some 14 stories tall and will be traveling at a speed of nearly a mile per second. The company compared the challenge of stabilizing it to balancing a rubber broomstick on your hand in the middle of a windstorm.

The autonomous spaceport drone ship on which the rocket must land measures just 300 by 100 feet, with wings that extend its width to 170 feet. It also won’t be entirely stationary.

Next week’s challenge will be part of SpaceX’s mission to use the Falcon 9 rocket to send an unmanned Dragon spacecraft to the International Space Station, much the way it did for the first time back in 2012.

Most recently, the Dragon spacecraft delivered nearly 5,000 pounds of cargo to the ISS in September.

To help stabilize the Falcon 9 first stage and to reduce its speed in preparation for landing, SpaceX will relight the rocket’s engines for a series of three burns. The first, known as “the boostback burn,” will adjust the impact point of the vehicle; next, the supersonic retro propulsion burn will help slow the vehicle’s speed from 1300 m/s to about 250 m/s. In the final landing burn, the legs will deploy and the vehicles speed will be further reduced to about 2 m/s.

While historically most rockets are designed to burn up on reentry, SpaceX designs its own not only to withstand reentry, but also to land safely on Earth to be refueled and fly again.

“One of the key steps en route to the commercialization and utilization of space resides in being able to deliver payloads into Earth orbit cheaply,” William Newman, a professor in the departments of earth, planetary and space sciences, physics & astronomy, and mathematics at UCLA, told TechNewsWorld.

“The development of a recoverable and, especially, reusable, first stage could dramatically cut the delivery cost as well as the time interval between launches, which otherwise would be lost to repair and/or replacement of the first stage,” Newman explained.

Four new hypersonic grid fins are a key part of what’s enabling this heightened precision targeting of the Falcon 9 all the way to touchdown, SpaceX said.

Placed in an X-wing configuration around the vehicle, the fins — visible also in the video below of a June test flight — are stowed on ascent and deployed on reentry to control the stages lift vector. Each fin moves independently for roll, pitch and yaw.

Over the next year, SpaceX plans at least a dozen more launches for further testing. It’s likely that one of them will include not just landing a Falcon 9 first stage but also re-flying it, the company predicted.

“When it comes to space exploration, no mission is routine, and scientists and engineers continuously try for feats previously considered impossible. Success is never guaranteed, but human curiosity provides for an unstoppable drive,” Mario Livio, a senior astrophysicist with the Space Telescope Science Institute, told TechNewsWorld.