Space Explorers Hole Up in Hawaii to Simulate Life on Mars 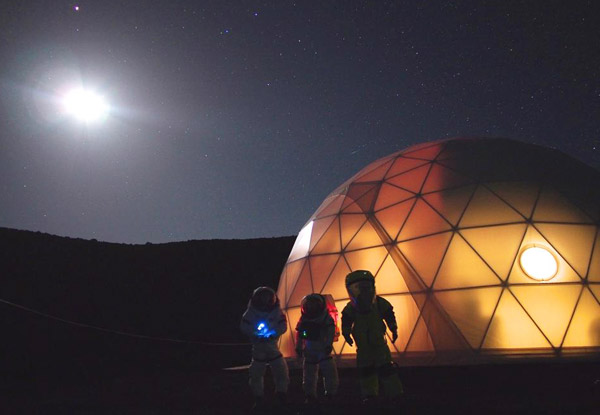 The third in a series of four simulated missions to Mars planned by NASA kicked off last week at a remote site on the Hawaiian island of Mauna Loa.

A six-person team, comprising the Hawai’i Space Exploration Analog and Simulation 3 mission, is inhabiting a dome for an eight-month study of the human factors that contribute to astronaut crew function and performance over time.

The HI-SEAS team is equally divided between women and men. One of the women, Martha Lenio, is its commander.

The program is being conducted by the University of Hawai’i at Mānoa.

The project’s purpose is to study crew psychology and social dynamics among crew members during long journeys in space, said Kim Binstead, principal investigator for the HI-SEAS project and an associate professor at the university.

Details of the Experiment

The project dome is on the Mauna Loa side of the saddle area on the Big Island, the largest island in the Hawaiian chain.

It is an isolated, Mars-like site about 8,200 feet above sea level that’s accessible year round.

At the site, which resembles the Tharsis plateau on Mars, crew members will perform analog tasks, such as geological field work, as if they were on Mars.

They will have to adhere to longstanding rules that would apply in a real-life setting on Mars — don simulation space suits and submit a plan to mission support for extra-vehicular activity when they go outside, and move around in pairs. They are limited as to how far they can go from the dome, Binstead told TechNewsWorld.

Communications have a 20-minute lag — “the time it takes a signal to go to and from Mars,” she noted, and the crew eats shelf-stable food.

Crew members will be assigned research projects to conduct during their stay.

A NASA employee currently on leave is participating in HI-SEAS, but not in an official capacity as a member of the agency.

The Impact of Increasing Radiation

Regardless of a team’s preparation and fitness for the journey, plans for a Mars mission may be imperiled by changing behavior of the sun.

Galactic cosmic radiation is increasing, and that might impact space voyages of long duration, according to a study led by Nathan Schwadron, an associate physics professor at the University of New Hampshire, who works with the Cosmic Ray Telescope for the Effects of Radiation, or CRaTER — an instrument used to study the effects of galactic and solar cosmic radiation on human tissue.

“The higher the flux — the rate at which cosmic rays bombard an object — the larger the number of cosmic rays that hit a body [and] the more damage it can do to tissue over a short period of time,” Schwadron told TechNewsWorld.

It takes about seven months to travel to Mars, and NASA envisions a round-trip voyage and landing to take three years.

Assigning women to half the positions in the HI-SEAS mission suggests progress in gender representation in space — only 58 of 535 space explorers thus far have been women, 44 of them from the United States. The first Briton, the first South Korean and the first Iranian astronauts all were women.

However, a participant in last year’s HI-SEAS mission believes that it might make scientific sense to give women more than equal time with men. Kate Greene, a reporter for Slate who participated in the project, found that women typically consumed — and burned — fewer calories than men and were better suited to meet the mission challenges for a number of other reasons as well.

However, one factor that might diminish that argument somewhat is the finding that women tend to be at higher risk of harm due to radiation.

That said, it’s not likely to prevent women from going into space.

“I don’t think there is any argument against using women that makes real sense,” David Alexander, director of the Rice Space Institute at Rice University, told TechNewsWorld. “When it comes to the human space program to Mars, we need the strongest and most talented candidates we can get.”

There are many potential solutions to the heightened radiation problem, including launching missions at solar maximum or using astronauts naturally resistant to cancer, Schwadron pointed out. “Research by the medical community is continuing.”