Snowden in the Running for Nobel Peace Prize 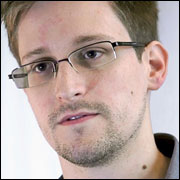 Saying that his bottomless pit of surveillance revelations contributes to stability and transparency, the lawmakers submitted the nomination to the Nobel Foundation.

President Obama won the 2009 Nobel Peace Prize, meaning Obama and his secret-leaking foil could soon have at least one thing in common.

Snowden, currently holed up in Russia, is one of 259 nominees for this year’s award.

[Source: Bloomberg via The Verge]

Nintendo to Make Push Into… Healthcare?

Nintendo President Satoru Iwata has announced that the long-time videogame manufacturer would make a foray the healthcare industry.

Iwata was short on details about the company’s so-called “quality of life” business plans, although he did say it won’t come in the form of a wearable device. Whatever it is, The Wall Street Journal used the phrase “nongame product.”

The vague healthcare announcement came during a press conference in which Iwata professed confidence about Nintendo’s prospects — this despite the company’s disappointing performance of late. Upon announcing a recent 30 percent drop in profits, top execs took a pay cut. Iwata reportedly is punting on 50 percent of his pay.

In the wake of news that the National Security Agency and its British snooping counterpart were sucking data out of smartphone apps, hackers defaced the website of game-app Angry Birds.

Rovio, which makes Angry Birds, insists that it has not collaborated with U.S. or British surveillance outfits, so this hack job could be a bit misguided.

At any rate, the shenanigans — which included an Angry Birds character adorned with an NSA logo, as well as a mock banner that read “Spying Birds” — were quickly undone by Rovio.

The Syrian Electronic Army, which has hacked and defaced more than its share of companies and media outlets, tweeted a link to a screengrab of the defaced Angry Birds page with a message saying that “a friend” executed the hack.

After just 22 months of making Motorola phones, Google has sold the handset business to China-based Lenovo.

The US$2.91 billion deal will allow Google to maintain ownership of numerous patents. That said, it is a noteworthy shift — Google dropped $12.5 billion on Motorola Mobility in May 2012.

Finalizing the deal with Lenovo could be delayed by U.S. regulators, who, if history is any indication, figure to cast a wary eye at the Chinese tech giant.

Microsoft to Aussies: No NSA Backdoors

Microsoft told Australia’s Department of Parliamentary Services that its software does not contain “backdoors” through which the NSA can, you know, check up on the nation’s parliament.

Concerns cropped up last year after Snowden leaks suggested that the NSA had “direct access” to systems of Google, Yahoo and, yes, Microsoft.

A Dutch court ruled that the Netherlands’ Internet service providers will no longer need to block The Pirate Bay.

The Netherlands was one of a handful of European countries — along with Belgium, the UK and others — that ordered its ISPs to block The Pirate Bay. However, the Court of The Hague, citing research, ruled that the blockade is disproportionate and ineffective, and that it impeded on entrepreneurial freedom.