Smart Car 2 Transforms Itself to Tuck Into Tiny Spots 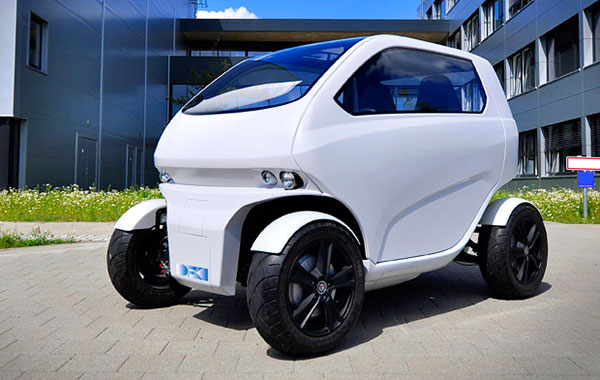 The DFKI Robotics Innovation Center in Berman, Germany, last week unveiled a prototype of the EO Smart Connecting Car 2, which it originally announced in 2012.

The tiny, two-seater electric vehicle operates much like a traditional car, but because each wheel is powered by its own motor, it can make extremely tight turns and even drive sideways when necessary. This capability could address issues that plague many big cities, notably traffic congestion and inadequate parking space.

The prototype has a top speed of around 40 mph, and it can travel up to 44 miles on a four-hour full battery charge. The car can transition from normal driving to driving sideways. It also can reduce in size to a total length of just 8.2 feet. This transformation, which involves shifting the axles while raising the car’s body, provides the vehicle with the ability to slide in tight spaces that would be too small for traditional compact-sized automobiles.

Micro Car for the Megacity

The EO Smart Connecting Car 2 is being billed as a micro car that would be ideal in the megacities of the future. This concept embraces the idea that fleets of the ultra compact vehicle likely would be utilized in a car-sharing scheme. To make their daily commutes, users simply would head over to a nearby docking station, select a charged car, and head to their destinations within the city.

However, the car still has issues that could limit its ability to truly transform the automotive market.

“It is an electric vehicle, so the range is limited,” said Egil Juliussen, senior director and analyst of automotive technology at IHS Technology.

“It certainly is not going to be used on the autobahn in Germany, but this technology could be very useful in the cities,” he told TechNewsWorld.

The EO Smart Connecting Car 2 could be a good alternative to scooters and motorcycles that fill the streets of Paris, Rome, Singapore and Rio, for example.

“All of the megacities around the world — in Europe, Asia and South America — have the same kind of need,” noted Juliussen. “There is massive congestion and little room to park. The city vehicle market is growing and we’re seeing various concept vehicles emerging.”

Too Small for the US

The original Smart Car, produced by Daimler, has attracted a niche following in the United States; however the two seater is widely viewed more as a novelty than a practical alternative for commuters.

The EO Smart Connecting Car 2 could also face an uphill battle to transform the market in the U.S.

Such small cars aren’t useful in much of the U.S. because of long commuting distances and the availability of mass transit, said Juliussen.

Even in Europe, cars are used more for weekend trips than for commuting, he pointed out.

However, the EO Smart Connecting Car 2 could succeed as a niche play.

“We don’t have the traffic in Europe, so our open roads are more suited to big cars, but that said Although the U.S. in general doesn’t have anything like the traffic problems that Europe has, and there are plenty of open roads more suited to big cars, “there is a niche group of people that will buy cars like this as a novelty or that ‘cool thing,'” Cupler told TechNewsWorld.

“It could work very well in a car-sharing program in areas like San Francisco or Vermont, where all things green are in vogue,” he suggested.

“The ability to transform and make it easier to parallel park … could catch on with urban dwellers,” Cupler added. “It wouldn’t be too hard to see this car spawn a whole industry of cars that are there when you need it.”