Skype’s new strategy for 2010: Your flat-screen TV in your living room can now be your phone. Or, if your tastes run more toward “The Twilight Zone,” think of it as your TV watching you — as you watch TV. 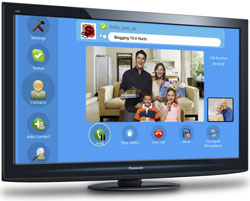 The makers of popular software that allows users to make free phone and video calls via the Internet announced new deals Tuesday with LG and Panasonic that put Skype inside new Web-connected versions of their HDTVs. Starting sometime in mid-2010, consumers who buy new Panasonic Viera TVs and LG sets with NetCast Access will be able to plug in special webcams (sold separately) and enjoy face-to-face conversations with family and friends.

Skype earned its reputation as a low-cost alternative to traditional phone calls via your PC, and that particular platform wasn’t ignored in Tuesday’s spate of announcements. The company also said it is now supporting 720p high-definition video calls over computers, and those attending this week’s Consumer Electronics Show in Las Vegas will get a chance to check out new HD webcams from Skype partners faceVsion and In Store Solutions that do all the software encoding within the cameras.

However, it’s the move to expand Skype’s domain from the home office to the family room that signals an important new direction for the seven-year-old company.

“We’re looking at how our customers are using Skype, and we’ve been running a ton of studies about what they want,” Skype director of business development Manrique Brenes told TechNewsWorld. “People want to have a better Skype experience and a more relaxed experience, and being able to go to their living rooms is a natural environment for it.”

Not that Skype is forgetting about the home-office users who make up a large portion of its customer base. “This is a business play as well. Most of our users use Skype for some kind of business engagement, and so this is also a natural evolution for them. These new systems are good entry-level solutions that will make Skype even better,” Brenes said.

The new PC webcams start at US$120; no prices have been announced yet for the Skype-friendly HDTVs. If they are anywhere near the consumer “sweet spot,” the company may see a boom in business, said Scott Steinberg, publisher and editor-in-chief of DigitalTrends.com.

“Anything that expands their market is of great benefit to them,” Steinberg told TechNewsWorld. “We’ve heard about mainstream video conferencing for years, and deals like this could finally bring this to fruition. For grandparents hoping to see their grandchildren half a country away, or for folks in international time zones hoping to catch up with friends — it’s amazing to think that this is what we now have in this day and age, that (video conference) is going to be more accessible.”

The webcams will be relatively easy to plug in to Skype-friendly TVs, Brenes said, and ease-of-use shouldn’t be a problem. Those wanting to take advantage of the new HD webcams for PCs will need processors that run at speeds of at least 1.8GHz to enjoy the 720p video.

However, even with more help for tech-intimidated consumers, Steinberg said Skype will have to reintroduce its calling features to a potential new audience who may not know that Skype-to-Skype calls are free, and calls to non-Skype landlines and mobile phones can be much cheaper than traditional services.

“Unquestionably, consumers will have to be reeducated about the benefits and the ease of use, especially with the TV,” he said. “The TVs should help break down barriers to entry. People are fairly comfortable using their remotes. This is the first time you are seeing this technology bridging this gap. Within a matter of years, maybe three years, a lot more people could be using their living rooms as a video conferencing hub.”