Skiff to Test Its Mettle in E-Reader Waters 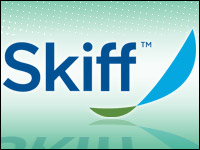 The e-reader market is set to take a big leap forward with the debut of the Skiff Reader at the 2010 International Consumer Electronics Show in Las Vegas this week. Skiff, a Hearst-backed consortium, has partnered with Sprint to deliver content to the devices via its 3G wireless network. 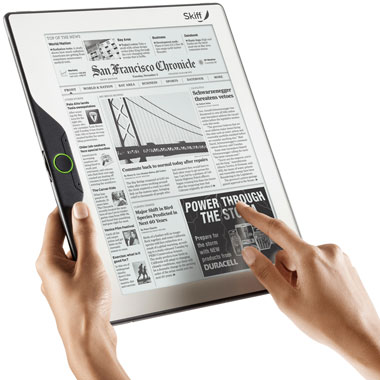 The Skiff Reader is the initial dedicated device for the upcoming Skiff e-reading service.

The Skiff Reader will also support wireless connectivity via WiFi.

Sprint and Skiff were unable to return the E-Commerce Times’ calls requesting comment in time for publication.

The e-reader market is growing rapidly. Besides Amazon’s Kindle, there is Sony’s Reader product line and Barnes & Noble’s Nook.

Each offers its own competitive edge or differentiator; in the case of Skiff that edge is newspaper and magazine content.

Five leading publishers — Time Warner, Conde Nast, Hearst, News Corp., and Meredith, publisher of the Ladies’ Home Journal and Family Circle, among others — are participating in the project, which is led by Time Inc. Senior Vice President John Squires. Its goal is to create a publishing platform, a digital storefront, a reading app and new opportunities for online advertising.

It will initially offer digital magazines, then branch out into other areas such as newspapers, comic books and blogs. In addition to a digital newsstand, the consortium will create an online reading app, a publishing platform, and new online advertising options. The goal is to deliver “enhanced content experiences” to its line of dedicated e-readers — as well as to multipurpose devices such as smartphones and netbooks.

Skiff also plans to compete with its form factor, which promises more appealing layouts, high-resolution graphics and rich typography, and dynamic updates. These features will make it easier for newspaper and magazine publishers to migrate their content.

A potential sticking point could be the partnerships with major consumer electronics manufacturers, which will have to integrate the Skiff platform. Last year, the company inked an agreement with semiconductor company Marvell to create a “system on a chip” for e-reading.

The Skiff consortium is taking an aggressive approach to online advertising, compared to its competitors, which is not surprising given that it’s a publisher-driven endeavor. The company is collaborating with publishers and advertisers on developing optimal standards, formats and metrics for e-reader ads.

For these reasons, Skiff will be a major player in the e-reader market, predicted James Brehm, senior consultant with Frost & Sullivan’s information and communication technology practice.

“First of all, the combination of these publishers and now Sprint is formidable,” he told the E-Commerce Times. “Also, there is the Skiff’s form factor: You have to have a decent-sized screen for an optimal reading experience — you can’t compress the screen too small. That is a big complaint by people who read from their smartphones.”

The Kindle is clearly the leader in the e-reader market at the moment — but as the market continues to grow and more players enter, there is a good chance it will be dislodged from its perch, Brehm said. “Two years ago, we had Sony and Kindle, and that was it. Now we have at least five possible devices, and more are coming.”

There will be 30 percent to 40 percent annual growth for the next 10 years, similar to projections for smartphones, he predicted.

It won’t be easy for the Skiff — or any new-to-market device and platform — to take on the Kindle, Richard Laermer, author of Punk Marketing and 2011: Trendspotting, told the E-Commerce Times.

“Aside from what the consortium publishers are offering, where is the content?” he asked. “Right now, they are asking consumers to buy a high-end device but to wait for the rest of the content. I am not sure that is enough.”

The key to these devices will be pricing, said Joe Cufari, VP of Personal Communications Devices (formerly Audiovox Communications).

“If the cost of the device includes the network cost and the material which people download is less expensive, as it is with other readers today, then eventually users will migrate to it,” Cufari told the E-Commerce Times.

There are other trends at works besides the number of entrants that will drive developments in this space, he added — namely the e-reader’s appeal to the education sector.

“We believe that eventually schools will adopt this type of device,” said Cufari. “Instead of kids lugging around heavy backpacks, they could carry a light device and have the ability to connect to and be updated with current information online.”