Scientists Catch Up With Jedi in Understanding Light 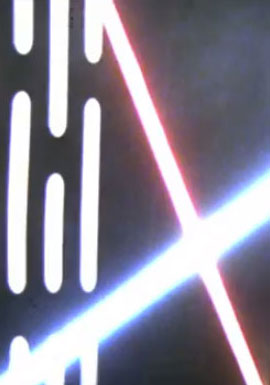 The fundamental properties of light derive from the fact that photons, which are the quanta of light, do not interact with one another.

That’s most easily seen by shining two beams of light at each other cross-wise — the beams pass through one other.

“What we have done is create a special type of medium in which photons interact with each other so strongly that they begin to act as though they have mass,” said Mikhail Lukin, a professor of physics at Harvard University.

Light’s ability to behave this way has been theoretically predicted by scientists for some time, although this is the first time experimental proof has been provided.

The researchers’ discovery of how to control the two-photon bound state “could lead to important technologies … even though the details of what the use is are not known yet,” Wendell Horton, professor emeritus of physics at the University of Texas at Austin, told TechNewsWorld.

Neither Lukin nor Vladan Vuletic of the Massachusetts Institute of Technology, who supervised the research, responded to our request for further details.

A Bit More About Photons

A photon is considered to be massless like gauge bosons and gluons.

In empty space, photons move at the speed of light.

If photons had mass, they would not move at the exact speed of light in a vacuum; instead, their speed would be lower and would depend on their frequency.

If a photon had mass, it would mean Coulomb’s law would not hold true. That would cause the presence of an electric field inside a hollow conductor when it was subjected to an external electric field.

Further, it would impact observation of the galactic magnetic field because that field can only be observed if photons have no mass.

Photons inside superconductors develop what’s called a “non-zero effective mass,” meaning that the mass they seem to have when responding to forces is — that’s right — not zero.

The researchers pumped rubidium atoms into a vacuum chamber, then used lasers to cool the cloud of atoms to a few degrees above absolute zero.

They then fired single photons into the cloud using extremely weak laser pulses.

When they fired two photons into the cloud, the two exited together as one molecule.

When one photon entered the cloud, it handed off part of its energy to the cloud and slowed down. However, when two were pumped into the cloud, they leveraged the Rydberg blockade effect.

That basically let the photons push and pull each other through the cloud, then exit together, behaving like a molecule.

The two-photon bound state was created owing to the distortion of the surrounding electromagnetic fields, he suggested.

Reactions to the Experiment

The interactions observed “only occur in the presence of matter which responds in a very nonlinear way to the presence of photons,” Andrew Cleland, a professor of physics at University of California at Santa Barbara, told TechNewsWorld.

Rydberg atoms are one example of a medium that responds in a nonlinear way, where there are different responses depending on whether zero, one or two photons pass through the medium.

The researchers’ discovery may enable the building of quantum computers, because photons remain the best means of carrying quantum information, and quantum logic requires interactions between individual quanta, according to Lukin. Until now, it was thought that photons could not be used because they don’t interact with each other.

Other possible uses might be in classical computing and the creation of complex 3D structures such as crystals wholly out of light, Lukin suggested.

“Slow light has found important applications,” observed Horton, “so the control of signals which are based on light would be a natural area where the discovery could make important contributions to society.”