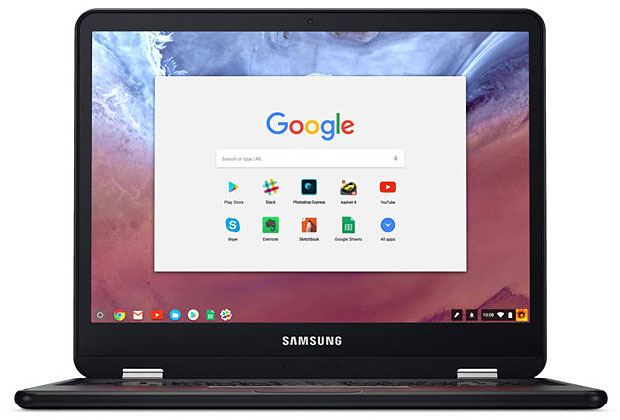 Some early reviewers of the Samsung Chromebook Pro characterized it as a “MacBook killer,” but others were more restrained in their enthusiasm. Jointly developed with Google and first demoed at CES 2017, the Chromebook Pro is slated for release next month.

Samsung’s Chromebooks basically are lightweight productivity tools that rely heavily on access to cloud-based resources. They have gained popularity in the enterprise for use with remote workers and in educational settings as entry-level computing tools.

However, they “are no Mac killers,” said Werner Goertz, a research director at Gartner.

The Chromebook Pro will sell for US$550.

“I don’t want to spend $1,000-plus on a PC or Mac when I could get something like the Samsung Chromebook Pro for $549,” Forbes’ Shelby Carpenter remarked.

The rounded edges and exposed hinge give the Chromebook Pro “a decidedly utilitarian look,” Wired’s Pierce noted, which is “just fine.”

Though the Pro is light and small, its squarish shape is “a little awkward when typing,” according to PC Magazine’s Song.

“I got my hands on the device at CES, and i was impressed with how thin and light it was while not feeling like a typical flimsy plastic Chromebook,” noted Eric Smith, a senior analyst at Strategy Analytics.

The Chromebook Pro’s battery life is “only beat by the much more expensive Chromebook Pixel 2 and the Dell Chromebook 13,” said Ars reviewer Palladino.

However, it “pales in comparison to what we saw” from various Asus Chromebook models, said PC Magazine’s Song, who noted that results of two tests varied substantially.

The display “makes the entire device taller than most 16:9 laptops and two-in-ones,” observed Palladino.

That allows a larger palm rest and more space for the user’s hands, but a huge bottom bezel and a hardware strip for the hinges to attach to the lid leave “a bunch of empty space,” he pointed out.

The display offers a much higher resolution than typically found in 11- or 13-inch Chromebooks, Song said, but the 3:2 aspect ratio means it’s more square-shaped. That leaves little room on either side of the keyboard, making the typing experience somewhat awkward.

The Stylus and Android Apps

Although the included stylus drew generally favorable remarks, “the quality of the inking wasn’t as impressive as Windows or iOS devices at similar price points,” Strategy Analytics’ Smith told TechNewsWorld.

Reviewers liked the Chromebook Pro’s access to the huge number of Android apps in the Google Play store.

However, some Android apps don’t play well with Chrome, they noted.

“Some apps don’t recognize the keyboard and trackpad; others seem unable to handle a touchscreen,” Wired’s Pierce pointed out.

“Most crash constantly,” and switching between apps can be clumsy, said Song.

Still, “I was able to do most of my daily work on the Chromebook Pro without major problems,” Palladino remarked, adding that it “performed faster than my MacBook Air.”

The convertible Chromebook segment is expanding rapidly, according to Linn Huang, a research director at IDC.

“Most have been underpowered, small-screen, low-cost offerings, [and] Samsung’s Chromebook Pro marks an evolution towards the premium end,” he told TechNewsWorld.

In general, Chromebooks “have largely been a K-12 phenomenon,” suggested Huang, and they need more work to succeed in the larger consumer market as a category.