Samsung Doubles Down on Galaxy Phones 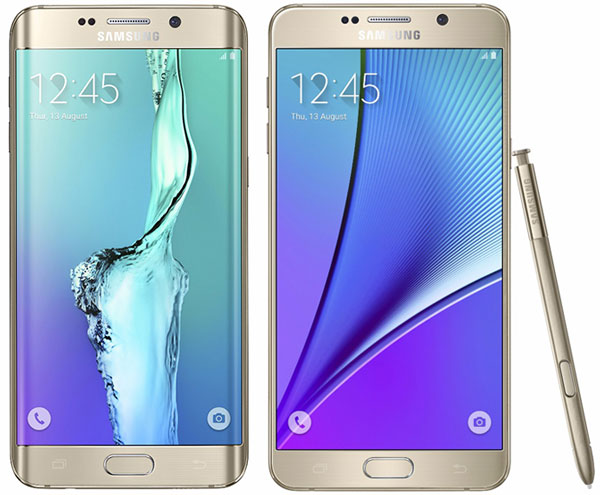 The smartphones reportedly will be available in the United States starting Aug. 21.

The Note5 reportedly incorporates many of the Galaxy S6’s features and design elements. It has a glass front and rear, a solid metal frame, a fast octacore Samsung Exynos processor and a high-quality camera.

Unlike earlier versions of the Note, however, the Note5 has a fixed battery, and it no longer supports microSD cards.

These changes may not be a problem for consumers, but “you’ll probably hear an uproar from the tech community,” said Tuong Nguyen, a principal analyst at Gartner.

“You’re getting rid of the phone in two years anyway, so who cares? People are comfortable with upgrading to the latest and greatest device because product releases are so frequent,” he told TechNewsWorld.

Specs for the Galaxies

Both devices have a 16-MP OIS rear camera and a 5-MP front camera with a focal length of 1.9.

They use a 3,000 mAh battery that offers fast wired and wireless charging.

One of the most frequently voiced complaints about Samsung smartphones is that they are power guzzlers, but the new models might just resolve that issue.

However, the Note5 and S6 edge+ “are still large and relatively expensive,” Lam told TechNewsWorld, “definitely more expensive than the base model iPhone 6 Plus, based on pricing I’ve seen from AT&T.”

Both the S6 edge+ and the Note5 support NFC and Samsung-owned LoopPay’s magnetic secure transmission.

That combination means Samsung Pay will not be restricted to NFC point-of-sale terminals, as MST will work with any POS terminal.

Samsung reportedly will run an invitation-only beta of its mobile payment technology in the U.S. later this month, and it will fully launch the service Sept. 28.

Samsung Pay initially will run only on the S6 edge+ and Note5. Samsung reportedly will release a free software update for the Galaxy S6 and S6 Edge later this month.

The release of the new Samsung phones “is clearly a preemptive move to capture as much attention and press as possible before Apple releases the update to the iPhone 6 and 6 Plus,” Lam said.

Apple’s unveiling is expected next month.

Samsung’s Note line “has suffered in the past year with the overwhelming success of the iPhone 6 Plus,” Lam observed, and the new devices “are aimed squarely at taking back the market leadership [Samsung] established on large format smartphones.”

“There’s an opportunity for 128-GB models for both devices, but that’s not in Samsung’s strategy for now,” said Jeff Orr, a senior practice director at ABI Research.

“They no longer go make a product for a niche market, knowing full well they’ll have to cut back at some point,” he said. “They don’t want to be everything to everyone but want to maintain their brand and their products, and deliver on continuous innovation.”