Samsung has given the audience at the International CTIA Wireless trade show a sneak preview of its forthcoming Galaxy S smartphone. At less than 10 millimeters, it is expected to be the thinnest Android phone on the market. It also has a 1-Ghz processor and sports a 4-inch, 800 by 480-pixel AMOLED screen that offers better outdoor visibility. 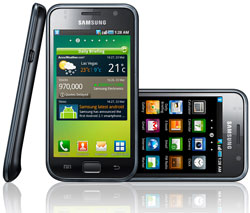 In short, it has been designed to render as well as possible the movies and e-book content Samsung will be licensing in deals it has inked with Paramount Pictures and Skiff.

No dates or pricing have been released, but there are indications the phone could become available this summer.

Other features of the phone include 3G HSDPA/HSUPA connectivity, a 5-megapixel camera, GPS, Bluetooth and UBS 2.0 connectivity. Users will be able to view and edit Microsoft Office 2007 documents on the device, and access social network status updates on its “social hub.”

There is a lot to like in these specs, Jack Vonder Heide, president of Technology Briefing Centers, told LinuxInsider. “I like the antiglare features, the full touchscreen, and the way you can control and share information.”

The big negative, he said, is that the 16-gigabytes of embedded memory will be used up quickly.

The content deals, though, are what stand out, said Azita Arvani, principal with the Arvani Group, as they also hint at Samsung’s product road mapfor smartphones in general.

“The Samsung phone is trying to take advantage of the popularity of e-book reader and video consumption. So, they can position this as a multifunction device that acts as a smartphone, a mini e-book reader and a video-focused device, and perhaps create some differentiation,” she told LinuxInsider.

Arvani, who is attending the CTIA show, noted that company executives who spoke there identified three smartphone attributes they wanted to focus on: screen, speed and content.

The Galaxy S “showcases their screen technology and their entry into the e-reading content area,” Arvani said. “Whether that makes a big difference in the eyes and hearts of the customers is yet to be seen.”

With the Kindle, Nook — and soon the iPad and related apps from Amazon and Barnes & Noble — it’s clear that consumers are going to want to read books and magazines on a variety of devices.

The same is true for video content, which has been moving toward mobile accessibility even longer than e-reading has, Greg Sterling, principal with Sterling Market Intelligence, told LinuxInsider.

“But recent studies — from Nielsen, among others — suggest that this will be a big consumption category down the road,” said Sterling.

The Galaxy S, though, is hardly the only handset with a form factor and specs designed for this constituency, noted Sterling, who pointed to the Windows Mobile HD 2, which he saw demoed this week.

“It has a high-resolution screen as well,” he observed.

Newer smartphones are typically coming with 1-Ghz capability, he said.

There is another element to this announcement, Dmitry Bagrov, SVP and developer for DataArt, pointed out — namely that Samsung is giving more attention to Android development.

“The fact that it is rolling out its product able to download movies and e-reading content is nice,” Bagrov told LinuxInsider, “and I believe the media and device will work well together — but the big story here is that this is a major boost for Android.”