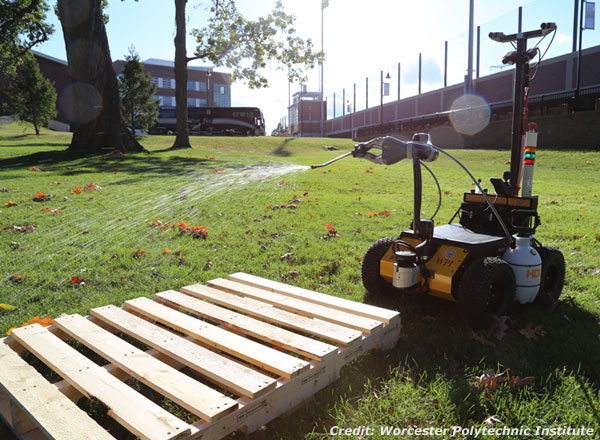 The White House and roboticists have set Nov. 7 to get together in a workshop to explore ways of using robots to help in the battle against Ebola.

The White House Office of Science and Technology Policy will cohost the workshop on safety robotics for Ebola workers, with Texas A&M University’s Center for Robot-Assisted Search and Rescue, or CRASAR.

Medical and humanitarian aid workers, members of the Defense Advanced Research Projects Agency (DARPA), and representatives from the Worcester Polytechnic Institute (WPI) and the University of California at Berkeley also will attend.

Possible roles for robots, according to CRASAR Director Robin Murphy, include transporting bodies, as Ebola is most virulent at the time of death and immediately after; handling materials; detecting contamination; performing disinfection routines; serving as telepresence robots that experts can use to provide consultation or advice on medical issues; serving as rolling interpreters; and providing physical security for workers in events such as the food riots that recently occurred in Sierra Leone.

Aero, pictured above, is a prototype robot developed at WPI to address the Ebola crisis.

“Unless Ebola continues to thrive through human transfer, I doubt that they would even have the time to build all these robotic solutions, and there will be many taxpayer dollars wasted on this effort,” cautioned Jim McGregor, principal analyst at Tirias Research.

Texas A&M reportedly has applied for funding through the National Science Foundation for a rapid response grant to study what technology is needed and what the requirements for the technology would be.

Robots have to meet “a lot of hidden requirements” and sometimes the least exciting or glamorous job can be of the most help to workers, Murphy wrote.

Examples of such hidden requirements include ensuring that an isolated field hospital can handle a heavy robot in the rainy season when the ground gets muddy; transporting robots to locations where they’re required; ensuring that robots are easy enough for locals to use so they can earn a living wage; ensuring the right kind of network communications are available; and figuring out what to do if the robots need repair.

“It’s actually often easier to design a robot for adverse conditions than to use humans,” McGregor acknowledged.

Meanwhile, students at Texas A&M will be creating prototypes, and students in Murphy’s graduate AI Robotics class this semester will be designing and simulating intelligent robots.

Mention of using robots for physical security brings to mind the ED-209 robot in the movie Robocop. It malfunctioned, you may recall, killing a junior executive of Omni Consumer Products, its creator.

Will the Idea Work?

It might be more fruitful to invest time and money in constructing more effective protective clothing or decontamination facilities, Frost’s Ravishankar told TechNewsWorld.

While the use of robots “looks promising, especially due to possible contamination and human risks, it would take a significant amount of time to introduce robots for clean-room applications such as this,” said Muthuraman Ramasamy , industrial automation and process control industry manager at Frost & Sullivan.

“If there’s a malfunction, how can we service the robot without touching it? Remote maintenance and service might not always be the answer,” he told TechNewsWorld.

Still, “there is a significant utility in automating certain aspects of patient care where otherwise personnel trained in caring for a diagnosed Ebola patient may not be available,” Venkat Rajan, principal analyst for advanced medical technologies at Frost & Sullivan, told TechNewsWorld.

Such robots likely would supplement human workers and not supplant them.