Rhythmbox Knows the Words and Carries the Tune

This story was originally published on May 5, 2010, and is brought to you today as part of our Best of ECT News series.

Rhythmbox, anintegrated music management application, was originally inspired byApple’s iTunes. This open source app works on the GnomeDesktop and is based on the powerful GStreamer media framework. 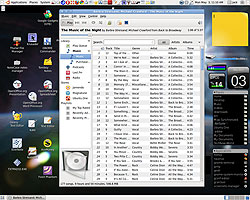 If you have read recent Linux Picks columns, you know that theLinux world of apps gives you several excellent choices to feed yourportable music-playing devices. You also know that Amarok and Listenare two of my favorite music-playing Linux apps.

However, that high-mark ranking could change as I continue to use Rythmbox.It lacks the unique detachable interface elements of Amarok, butRythmbox’s interface is otherwise similar in its design for managingmusic, podcasts and Internet radio selections.

One area in which Rythmbox excels is its long list of plug-ins. Theselets you mix and match features to fine-tune your listening experienceyour way. This offering alone could draw a new audience to Rhythmboxin much the same way as the extensive add-on repetoire in theFirefox Web browser makes it so popular.

The Look and the Feel

Rythmbox loads as a program icon in the panel bar. Left clicking givesyou the option to play, show Rhythmbox or quit the application byclicking the selection box to place a check mark. Play selects arandom title from the music library stored on the hard drive. Showdisplays the Rythombox program.

Media sources line up along the left edge of the Rhythmbox window.Artist and album details display in top and center columns in the restof the program’s display window.

Icons to control play/pause, next/previous and repeat/random order areavailable in the second row, just below the dropdown menu list.

I especially like the preferences Rhythmbox offers to set up how theprogram displays. You find this panel under the Edit menu. Four tabshandle choices under General, Playback, Music and Podcasts.

More setup options are found under the View menu in the top row of theprogram’s window. These preferences are presented in checkbox format.They control the size and the type of the display. These include PartyMode, Visualization, Side Panel, Statusbar and Toolbar.

Not all Linux music player apps can handle Apple iPods, at leastwithout jumping through hoops. Rhythmbox does this with ease.Selecting the Plugin option on the Edit menu list provides checkboxesto add support for both MTP (media transfer protocol) portable player devices and Apple iPods.

With music-playing software, some functions just do not work asexpected. Of course, the culprit may be hardware or OS flavor-related.One thing that often starts out broken is a program’s ability tofetch lyrics.

Rhythmbox does not have that problem, at least not on my somewhatolder desktops and laptops. Once I checked the desired lyric sourcesfrom the plug-in configuration menu, lyrics displayed flawlessly. Asthe music selection changed, so did the lyric display in the pop-upwindow showing the lyrics.

The lyrtics box moves easily to any location on the desktop. It alsoresizes nicely by grabbing a corner and dragging the size and shape asdesired.

Transferring music to and from devices such as an iPod, MTP and USB massstorage music players with Rhythmbox is simple and efficient. Rippingand burning audio CDs, however, is better left to separate apps.

Rhythmbox does not have built-in tools to do these tasks well. It ismore of a music file indexer and player than a ripper. But much likeadding a plug-in component, you can add Sound Juicer.

Sound Juicer is the Gnome CD ripper, included in Gnome Desktop. If itis not already installed, check your distro’s package managementpackage to get it. If you cannot find it listed, you can download itdirectly from here and install it manually.

Rhythmbox provides access to two music stores, Janendo and Magnatune. If you run theUbuntu Linux OS, you have a third source, the new music store added toUbuntu One.

Jamendo is a community of free, legal and unlimited music publishedunder Creative Commons licenses. Magnatune offers unlimiteddownloading and listening for US$15/month. The Ubuntu One Music Store, part of Canonical’s Ubuntu cloudservices, offers subscriptions to purchase music and cloud filestorage with 2 GB for free or the 50 GB plan for $10 per month.

It is easy to browse, preview and download albums and individualtracks from these sources from within Rhythmbox. You can transferexisting music collections with the import option in the Music menuand can scan removable media.

Rhythmbox has many cool things about it, but by far the feature thatmost separates this music management app from other leading contendersis its links to third-party plug-ins.

You can find a list of 20 plug-ins included with Rhythmbox in thePlug-in option under the Edit menu. Better yet, you can see a list of38 third-party plug-ins here.

Here are some of my favorites:

Among the many features that will quickly make Rhythmbox your favoritemusic playing app are its ability to easily browse and build yourmusic collection and its playlist functionality.

Other features are its searching and sorting capabilities and abilityto display audio visualizations. The ability to automatically downloadaudio podcasts is a great way for me to keep up with a growing demandfor news presented via this outlet.

Rhythmbox’s ripping weakness is its only real blight. The work-aroundis easy to apply. Match this music playing app against whatever youare now using. It just could make you switch.