RhoLogic Mobile for SugarCRM Is No Tease 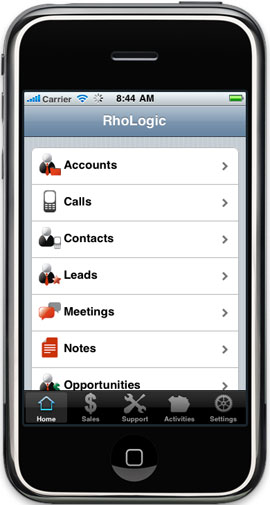 RhoLogic, a division of Logic Appeal, an integrator of SugarCRM software, last month released RhoLogic Mobile for SugarCRM. The app is now generally available for download at the iTunes App Store and Android Market. The company is working on a BlackBerry version, as well asversions for Windows Phone 7 and Symbian.

The app itself is fairly straightforward, mirroring much of SugarCRM’sfunctionality: There are fields for accounts, contacts, leads,opportunities, meetings, calls, tasks, orders, profiles and products.Users can enter information on their device and it syncs with thecorporate database.

However, getting to this point — one that the average mobile user simply takesfor granted — entails several processes, according to Rhomobile CEO Adam Blum.

Rhomobile took an active interest in the app’s development, he said, in part because RhoLogic was usingsome of the framework’s most advanced features, and in partbecause Rhomobile uses SugarCRM as its CRM application and waslooking forward to a mobile version.

SugarCRM was happy about the project as well, Blum remarked. Users previously had to rely primarily on a Web page optimized for mobile use.

RhoLogic wanted to roll out an app that didn’t require anycustomization or additional spending on implementation on the part ofthe end user, which is why it turned to the Rhodes framework, Blumsaid.

“Most CRM applications require customization at some level. Theyhave added new fields or changed the structure in some way. So when acompany is rolling out a mobile application, similar customization andsystems integration is usually necessary,” Blum explained.

RhoLogic’s goal was to havean app that that would automatically turn on with whatevercustomizations the user had made, he noted, and Rhodes’ metadata frameworkallowed RhoLogc to accomplish that.

“It hooks into the back end, exposes the metadata, and then maps thatto a common description as to how to display an object or describe afield or prompt,” said Blum.

What this means is that when a layout or language field is changed inthe main application, these changes are immediately made to themobile application as well.

Of course, users have no clue about the complex middleware that sitsbetween devices and the corporate back ends.

To turn on the mobile app, users must first download it from the Android Market oriTunes, then get a subscription from RhoLogic, along with a user ID andpassword. A simple set-up follows, after which the user’s SugarCRMapplication — complete with all modifications — is displayed on the device.

It is rare to find compatibility withcustomized schemas or structures, Blum said. “Most mobile CRM apps are liketeaser-ware. You can start it up and play with it, but you still haveto have it customized if you want to get value-add out of it or use init the field.”

The application is also notable because it does bulk or large scalesyncing, Blum said.

“SugarCRM has customers with hundred-megabyte andgreater product databases, such as medical and dental suppliers,” he noted. “Thatis an important feature for them.”