Researchers at the University of Hamburg in Germany have, for the first time, written and deleted data on single hypothetical particles called “skyrmions.”

Skyrmions have been reported to exist in thin magnetic films and superconductors, among other things, but this has not been conclusively proven. 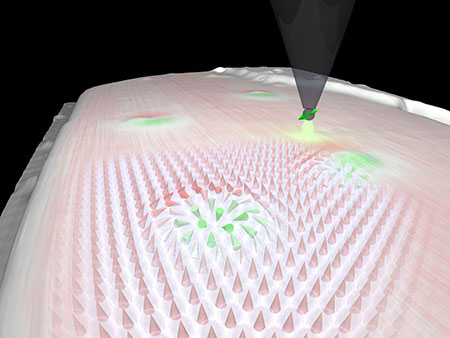 A skyrmion can be imagined as a two-dimensional magnetic knot, in which the magnetic moments are rotating with unique rotational sense by 360 degrees within a plane. The image shows data from a spin-resolved scanning tunneling microscopy experiment together with a sketch of the sample magnetization. (Credit: Group of R. Wiesendanger, University of Hamburg)

Their use could solve the problem of coping with the increasing demands for storage on electronic devices, which are being made ever smaller. For example, wearable devices are expected to constitute the next wave of mobile products.

However, translating the research into the real world might take a lot of work.

“I like the fact that they’re talking about hypothetical things,” Jim McGregor, principal analyst at Tirias Research, told TechNewsWorld. “It sounds like a cool experiment but that’s it. You’d have to control all external environmental factors and that would make it difficult to deal with.”

Skyrmions Are All in the Mind

A skyrmion consists of a quantum superposition of baryons and resonance states. Let’s see what that means.

Baryons are composite subatomic particles made up of three quarks — elementary particles that are protons or neutrons. Quarks cannot be isolated for direct observation; they clump together in little gangs — mesons or baryons — and cannot be individually separated from them.

Quantum superposition postulates that a physical system, such as an electron, exists partially in all its theoretically possible states simultaneously, but gives a result corresponding to only one of those states when observed or measured.

Resonance, as it’s used in particle physics, refers to the peak located around a certain energy associated with subatomic particles such as — that’s right, baryons.

So we have a hypothetical concept that consists of what you observe or measure — the quantum superposition — of a three-quark particle at a given energy peak.

The researchers used an iridium crystal covered with a film of palladium and iron two atomic layers thick in an external magnetic field, which exhibited single localized skyrmions a few nanometers in diameter. The skyrmions were imaged in a spin-polarized scanning tunneling microscope.

This had to be done within specific temperature limitations.

The need for highly controlled conditions causes Tirias Research’s McGregor some concern because constantly fluctuating external factors such as temperature could make using the technology expensive.

“IF this is the case, I don’t see how this could economically be used as a storage technology,” McGregor continued. “The environmental concerns alone could send the cost and complexity through the roof.”

“I’ve seen similar kinds of things out of IBM Storage,” Charles King, principal analyst at Pund-IT, told TechNewsWorld. “The concept is, you manipulate the direction in which the particles spin — have them spin right for 1 and left for 0, for example.”

Another alternative to magnetic storage is resistive random-access memory, also known as ReRAM. This is a non-volatile type of memory that is under development at several companies. Panasonic launched a ReRAM evaluation kit last year; SanDisk plans to manufacture ReRAM in the second half of this decade; and startup Crossbar recently announced its own ReRAM technology.

“Will there be a day when magnetic storage is replaced by an alternative?” King asked. “Yes. But I don’t see that happening for a decade at least.”