Researchers at the Max Planck Institute of Quantum Optics have set up a quantum network consisting of two coupled single atoms.

These atoms communicate quantum information through the coherent exchange of single photons. 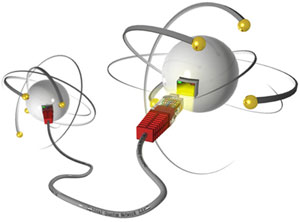 Single atoms form the nodes of an elementary quantum network in which quantum information is transmitted via the controlled exchange of single photons. (Graphic by Andreas Neuzner, MPQ)

Decoherence, which can be thought of as the loss of information from a system into the environment, is one of the obstacles to building a working quantum computer because such computers require that coherent states are preserved. So enabling coherent exchange of information is an important step in quantum computing.

The researchers claim to have realized the first prototype of a quantum network. However, the United States Defense Advanced Research Projects Agency (DARPA) has had a quantum network up and running since 2003.

Still, the research seems to be “a substantial refinement,” Rob Enderle, principal analyst at the Enderle Group, told TechNewsWorld. “It appears to more directly address the issues of data density and scalability, and it appears to have security advantages as well.”

The researchers have been working on systems in which single atoms are embedded in optical cavities consisting of two highly reflective mirrors placed fairly close to each other.

Photons entering a cavity are reflected between the mirrors thousands of times. That strongly enhances the atom-photon interaction and lets the atom absorb the photon coherently and efficiently.

The researchers proved that the singe atom cavity system represents a perfect interface for storing information encoded in a single photon. They were able to transfer that information onto a second single photon after storing it for some time.

In the latest research, two such single atom cavities were connected and quantum information was exchanged between them with high efficiency and fidelity for the first time. The cavities were installed in two laboratories 21 meters apart that were connected by an optical fiber.

“If you measure quantum information, you change it,” Stephan Ritter, one of the Max Planck Institute research team, told TechNewsWorld. “But we dream of a quantum network where quantum information can be sent from one node to a second one where it can be stored and later on be passed on to a third node.”

More on the Research

In the experiment, a photon encoded with information about an atom’s state was emitted and transmitted to the second lab over the fiber optic cable. It was then coherently absorbed and its quantum state was transferred onto an atom at the second lab.

The first atom was then ready to receive the next photon and the second atom was ready to send the stored information back to the first, or to any other node.

“Our research was not primarily driven by the quest for miniaturization, but we wanted to demonstrate an elementary quantum network with reversible nodes … without requiring independent devices for each of these functionalities,” the Max Planck Institute’s Ritter said.

Although work on quantum computing is mainly still at the theoretical level, it tends to arouse considerable interest.

That’s because “when you have data streams at an atomic level, you create the opportunity for very small connected devices, connected micro-machines and relatively small physical pipelines that can carry massive numbers of data streams,” Enderle suggested. Quantum computers are “potentially vastly faster and vastly more secure” than traditional ones.

Also, quantum computing is highly scalable, “which is an important area of research for many computer companies, especially semiconductor manufacturers,” Hayes pointed out.

“Our approach is by no means limited to quantum cryptography, which would call a special-purpose quantum network,” said Ritter.