Researchers at the University of Pennsylvania have demonstrated the feasibility of using all-optical switches for possible use in computing. 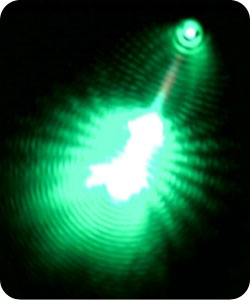 Laser light is emitted from the end of a cadmium sulfide nanowire.(Source: University of Pennsylvania)

The team, led by professor Ritesh Agarwal, grew nanowires, grew a silicon oxide shell on their surfaces to improve their optical properties, cut a nanowire, pumped light through it, and turned off the light, making the device a switch.

This growing of the silicon oxide shell on the nanowires is a technique known as surface passivation.

The team used vapor-liquid-solid synthesis to grow the nanowires out of pure cadmium sulfide powder, Brian Piccione, the first author of the paper and a graduate student at the university, told TechNewsWorld.

It then used a focused gallium ion beam to cut the nanowire into two segments.

Next, the researchers pumped a pulsed laser beam from a commercially available Coherent Chameleon laser through the first segment, Piccione said. The energy pumped varied, and, in some cases, the team was able to show switching with less than 1 miliwatt of optical power applied to the switch.

“Energy was continuously pumped into the first portion in order to create a continuous on-chip laser probe source,” Piccione explained. “This on-chip source in turn continuously stayed on for the duration of the experiment, in order to produce something for us to switch on and off.”

The team isn’t clear as to why pumping a second pulse of light through the second segment of the nanowire turned off the first pulse being transported through it.

“We believe the light is switched off via a scattering mechanism, potentially aided by the strong light-matter coupling which we have previously shown exists in our nanowires,” Piccione said.

Last year, a team that included Piccione and Agarwal demonstrated that polaritons have increased coupling strength in nanoscale semiconductors. This showed that photonic devices, which use light instead of electricity, might be workable.

“All-optical switching has never been shown before in individual nanowires, and therefore the exact mechanism causing this brand-new result [turning off the first light] could be further explored and researched,” Piccione stated.