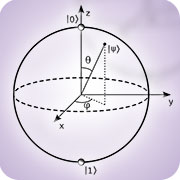 Researchers at JILA, a joint institute of the University of Colorado at Boulder and the United States National Institute of Standards and Technology, have demonstrated quantum entanglement between the motion of a minuscule mechanical drum and a microwave field. 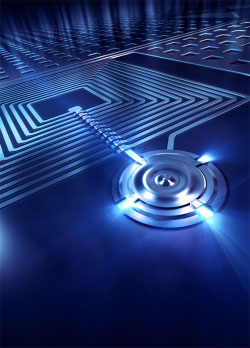 Using an electrical circuit (upper left), the Lehnert group has entangled the motion of a drum (lower right) with an electrical signal carried away from the circuit. (Credit: Jack Bertram, Motion Forge, for NIST)

The researchers built on groundbreaking work carried out in 2010 by University of California Santa Barbara physicists, who first demonstrated quantum superposition in an object large enough to be seen with the naked eye.

The JILA experiment “is about hybrid quantum systems, or trying to do quantum mechanics with mechanical systems,” Andrew Cleland, the UCSB physics professor who led the 2010 experiment on which JILA’s work is based.

Hybrid quantum systems are being considered for use in quantum communications.

The Wicked Web of Quantum Entanglement

Quantum entanglement occurs when pairs or groups of particles interact such that their quantum states correlate. If, for example, one member of an entangled pair is measured and the outcome is known, the other member of the pair will always have an appropriately correlated value when it is measured at any time, at any distance.

So, if it’s known that one member of an entangled pair has a clockwise spin, the other member will always have a counterclockwise spin.

Essentially, the JILA researchers cooled down a drum, or circuit, to its ground state, meaning its lowest-energy state. They hit it with a microwave field, causing it to create and give off a microwave pulse, and then measured that pulse.

“The drum always beats at the same center frequency, but it now has an amplitude and phase that it captured from the microwave field,” Tauno Palomaki, a postdoctoral research associate at JILA, told TechNewsWorld.

The microwave resonator is coupled to the mechanical oscillator, or drum.

The researchers first fired a pump at a frequency below the microwave resonator’s frequency of 7.7 GHz. The drum had a resonance frequency of 10.3 Mhz, and, when it was hit by the pump, it was cooled to near its ground state.

They then fired a second pump at a frequency above the microwave resonator’s resonance frequency. This created a pulse entangled with the drum.

The researchers fired a third pump, again tuned below the microwave resonator’s resonance frequency. This caused the drum to emit a third pulse.

More Details of the Experiment

The researchers had to adjust their results for the noise created by the measurement.

“We characterize the effects of added noise by determining the measurement efficiency,” Palomaki said. “To determine this, we apply calibrated signals subject to the same measurement apparatus as our entangled states.”

This measurement efficiency incorporates both attenuation — loss in the cables — and added noise.

“Determining the measurement efficiency allows us to infer the entanglement we would have measured with a perfectly quantum-limited measurement,” Palomaki pointed out.

The pulses were generated by commercially available microwave test equipment.

The Idea Behind the Drum

UC Santa Barbara’s Cleland “was trying to show that you could put a quantum state in a mechanical system, and it would be have in the way it would when you had a quantum system” when he conducted his experiment in 2010.

He has published the results of another experiment conducted with a colleague that approximately complements the one conducted at UC Boulder.

“Ours is in the classical limits, something that should be able to work in the quantum limit, but we have not demonstrated that yet,” Cleland said. “The JILA group is doing something in the quantum regime.”