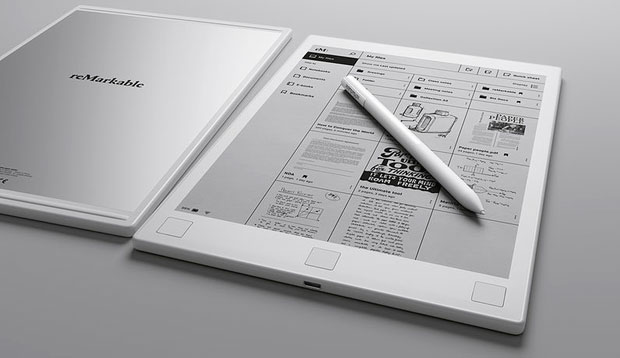 reMarkable on Monday will begin shipping what might best be described as an “untablet” — a device that is, essentially, an electronic piece of paper.

The company is proud of its paper tablet’s simplicity, boasting that no other tablet has fewer functionalities.

reMarkable users cannot install apps, watch videos or take photos. What they can do is read, write and sketch on a paper-like surface with a modern twist.

reMarkable is about 7×10 inches and a mere quarter-inch thick. It weighs in at .77 pounds. It has no glass parts, and is virtually unbreakable, according to the company.

It is powered in part by E Ink Carta technology.

The purchase price is US$599 for the reMarkable paper tablet, marker, marker tips and cable.

More than 35,000 units already have been sold, according to the company.

“With the right targeting, I can imagine a subset of e-reader users would really enjoy this product and could move up to this when deciding to replace their old Kindle or Kobo,” said Eric Smith, director, tablets and touchscreens, at Strategy Analytics.

“The problem is, it’s already a limited pool of potential customers for a company with a limited marketing budget and distribution reach,” he told TechNewsWorld. “This is now just as expensive as a 10.5-inch iPad Pro with the Apple Pencil.”

The pricing isn’t excessive, said Rob Enderle, principal analyst at the Enderle Group, because demand for e-paper displays isn’t as strong as for LCD displays.

“You don’t get the massive economies of scale that LCD displays enjoy, particularly at this large size,” he told TechNewsWorld.

“I do consider myself a ‘paper person.’ I’m someone who’s excited by the prospect of reading physical books and taking notes by hand,” wrote Avery Hartmans for Business Insider.

“For that reason alone, I loved the experience of using reMarkable. It feels a lot like the early Kindles, but with … modern touches. Using it was a pleasant break from being constantly connected, and it was nice to have an excuse to doodle or write down to-do lists and notes,” she added.

On the downside, it was “generally slow,” Hartmans pointed out. “For $600 I wanted the device to be quick and responsive, and it simply wasn’t.”

Another problem was screen burn-in. Images remained faintly on the screen even after being erased, she noted.

Although the reMarkable tablet didn’t quite meet her expectations, “I still think it’s an incredible product,” Hartmans wrote. However, “paying $600 for an E-ink tablet like this in 2017 still seems too steep to me.”

The reMarkable tablet’s lack of additional functionalities — the ability to watch movies on it, play games or browse the Web — “is this device’s strongest feature,” Max Parker wrote for Trusted Reviews, because “it sets the [device] apart.”

reMarkable is “a great tool for artists,” he said, noting that “the level of detail you can achieve is impressive.”

However, he wasn’t impressed by the unremarkable design, and he would have preferred having the option to select a cloud service other than reMarkable’s.

“You will be able to livestream from the reMarkable to a computer, however,” Parker pointed out, “which appears to make it an ideal tool for meetings and group working.”

“Lenovo’s Yoga Book and Yoga A12 are perfect examples of innovation in inking that really adds value to something many people already use,” said Strategy Analytics’ Smith.

“Tablets equipped with another pane of glass for digitizing paper notes through EMR panels seems a more functional and less expensive innovation than reMarkable,” he suggested.

The tablet “is going to be a really hard sell at such a high price point,” Smith said. “The price, low functionality and complicated workflow to move from connected device to ‘simplified’ reMarkable are big pain points.”