Q4OS: A Diamond in the Rough Gets Some Polish 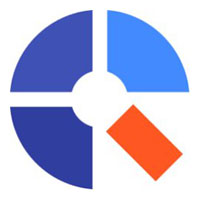 Sometimes working with Linux distros is much like rustling through an old jewelry drawer. Every now and then, you find a diamond hidden among the rhinestones. That is the case with Q4OS.

I took a detailed first look at this new distro in February 2015, primarily to assess the Trinity desktop (TDE). That was a version 1 beta release. Still, Trinity showed some potential.

I have used it on numerous old and new computers, mostly because of its stability and ease of use. Every few upgrades I check out its progress. Key to this is watching the improvements and additional functionality of Trinity.

Q4OS is a lightweight Linux distro that offers some worthwhile alternatives to more established distros. Do not misunderstand what “lightweight” in Linux means, however.

Q4OS is designed with aging computer hardware in mind, but it does not ignore more modern boxes.

Its main claim to fame is the developing Trinity project desktop. Trinity was forked in 2008 from the last official release of the K Desktop Environment’s third series (KDE 3), version 3.5.10. 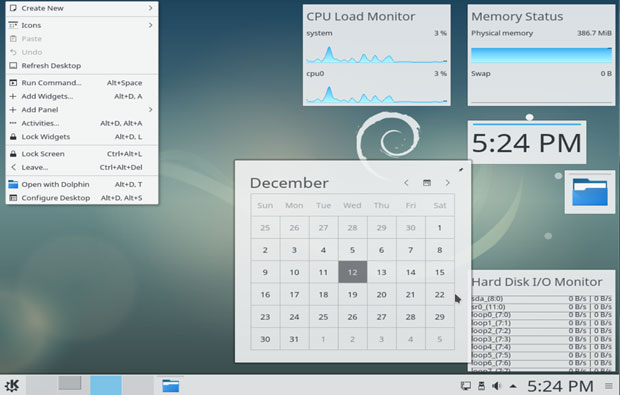 Q4OS has a simplified KDE 3 design that has useful desktop applets for this alternative to the Trinity desktop. Other desktop options also are built in.
– click image to enlarge –

The Germany-based developers recently issued a significant update to the Q4OS snapshot of the distribution’s Testing branch, code-named “Centaurus.” Q4OS Centaurus 3.4 is based on the current Debian “Buster” and Trinity desktop (TDE) 14.0.6 development branches.

This distro is fast and runs extremely well on low-powered aging computers. Q4OS has superb performance on newer computers. Its design pushes classic style with a modern user interface in a new direction. Plus, it is very applicable for virtualization and cloud use.

From Rough to Polished

When I first started to monitor the Trinity desktop, I thought it had the potential for becoming a new attention-getter among up-and-coming Linux distros. The primary distro developer that implemented TDE was, and still is, Q4OS. The distro primarily is built around TDE as the default desktop.

It is easy to swap TDE into other more popular desktops without removing an easy return path to both TDE and KDE. Supported desktops include LXQT, LXDE, XFCE4, Cinnamon, KDE Plasma, Mate and GNOME. Installing a different desktop does not remove the TDE desktop. Instead, you can select between the alternative you installed and the TDE desktop at the login screen.

To install a different desktop environment, go to the Desktop Profiler tool and click the Desktop environments drop-down in the upper right corner of the window. A new window appears, where you can select your desktop of choice from the drop-down. Once back at the main Profiler Window, select which type of desktop profile you want, and then click Install.

These choices give both business and individual users lots of options. One of the big values in using Q4OS Linux is the add-on commercial support for customizing the distro to meet specific user needs. The name of the developers is not publicized on the website.

However, Q4OS clearly is intended to be more than a community-supported general purpose Linux distro. The website also invites businesses to makes use of Q4OS.org’s commercial support and software customization services.

Q4OS is designed to offer a classic-style user interface (Trinity) or other alternatives with simple accessories. The distro provides stable APIs for complex third-party applications, such as Google Chrome, VirtualBox and development tools. The system also is ideal for virtual cloud environments, due to its very low hardware requirements.

One of the most important changes in this latest release is the switch to the Calamares installer. Calamares offers nice new installation features. For example, it offers optional full encryption of the target system, as well as easy disk drive partitioning.

Another important change is a move to the new Trinity 14.0.6 development version. All dependencies from the current stable Q4OS Scorpion version have been removed, making Centaurus fully independent, with its own repositories and dependencies.

Secure Boot support has been improved too. This is very handy if you install Q4OS on newer hardware hosting Microsoft Windows.

Q4OS Centaurus offers the bleeding edge of Linux computing. It will be in development until Debian Buster becomes stable. Centaurus will be supported at least five years from the official release date.

The minimal hardware requirements are ideal for older hardware. The Trinity desktop needs at least a 300-MHz CPU with 128 MB RAM and 3 GB hard disk storage. Most of the other alternative desktops are lightweight and run with ease under the minimum resource requirements. The KDE Plasma desktop — and perhaps the Cinnamon desktop — thrive with at least a 1-GHz CPU, plus 1 GB RAM and 5 GB hard disk storage.

The Trinity desktop design presents the simplified look of KDE applications while eliminating the layers of customization associated with KDE’s Activities and virtual desktop navigation. It displays the Bourbon start menu and taskbar. 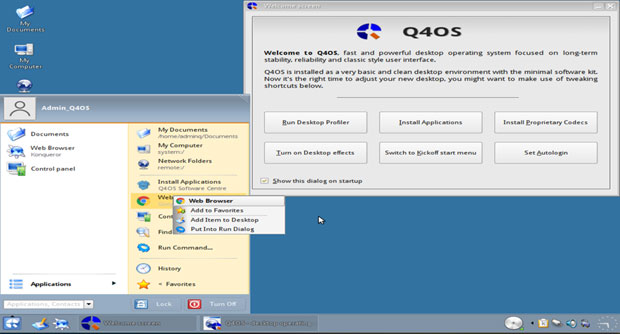 Q4OS’s Trinity environment has a simplified desktop with bottom bar, classic menu options, and the ability to add/remove application icons on the desktop.
– click image to enlarge –

Timothy Pearson founded the TDE project and continues to lead it. He is an experienced software developer who was the KDE 3.x coordinator of previous Kubuntu releases.

TDE is both flexible and highly customizable. It has a pleasant visual appeal. Its desktop effects are compatible with older hardware. Trinity fills the gap left open with the other lightweight desktop options, which offer little in the way of desktop visual effects.

The field of new alternative desktop environments has created a clutter that may have blunted more interest in TDE. For instance, choices such as Pantheon, Enlightenment, Budgie and Awesome offer unique lightweight choices. Still, Q4OS levels that playing field by letting you use your desktop choice without undermining the unique system tools and customization opportunities the distro provides.

You will not find the Trinity desktop shipping as an option with most Linux distros. Those that use Trinity include Devuan, Sparky Linux, Exe GNU/Linux, ALT Linux, PCLinuxOS, Slax and Ubuntu Nightly.

TDE’s growth with Q4OS makes the combination a viable alternative to meet individual and small business computing needs. The TDE 14 series has been in development for more than two years. This extended development period has allowed the creation of a better and more stable feature-rich desktop environment than found in previous TDE releases.

Whether you adopt Q4OS to replace a Microsoft Windows experience or another Linux distribution, you will not have much of a learning curve. Out of the box, this distro works well with the default configurations.

Its simplified interface is intuitive. Whether you are a holdover from Windows XP or Windows 7 or even a disgruntled Window 10 refugee, Q4OS offers an inviting look and feel.

The basic collection of software barely gives you enough applications to get started. You will not find any bloat.

Installed titles include Google Chrome, Konqueror, KWrite text editor and a few system tools. From there, what you want to use is easily available through the software center and the Synaptic Package Manager (after you install it).

The Welcome screen makes it very easy to start setting up the desktop with just a few clicks. It is a good starting point. From that panel, you can add packages conveniently and quick start some of the unique features.

Turn On Desktop Effects makes it easy to activate more eye candy without having to wade through more detailed Control Panel options.

Switch to Kickoff Start Menu switches from the default Bourbon menu to either Classic or Kickoff styles. It is easy to try each one. Set Autologin allows you to set login to bypass requiring your password upon boot. 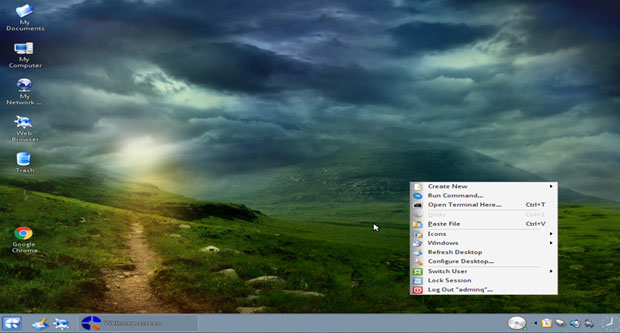 A nice touch is the variety of background images and the right-click menu anywhere on the desktop.
– click image to enlarge –

Q4OS has a focus on security, reliability, long-term stability and conservative integration of verified new features. This operating system is a proven performer for speed and very low hardware requirements. That performance is optimized for both new and very old hardware. For small business owners and high-tech minded home office workers, Q4OS is well suited for virtualization and cloud computing.

One of the hallmarks of this distro is to be a suitable powerhouse platform for legacy hardware. So the developers continue to resist a trend among Linux devs to drop support for old 32-bit computers.The 32-bit versions work with or without the PAE memory extension technology.