Pushing on a String?

Whenever I think about the direction of the CRM market and of technology and business in general, my mind keeps coming back to some data I saw in The Economist magazine in April. Frequent readers might recall this graphic from an article in the April 23 edition of The Economist titled “Looking for Trouble.”Figure 1: Capital investment decline 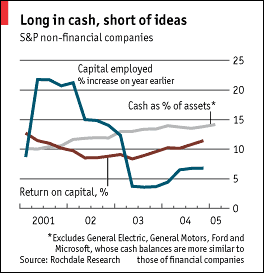 At the time I wrote, “The article references Nicholas Colas, head of research at Roachdale Research, a boutique broker dealer in New York. Colas contends that companies have improved their financial positions at the expense of under investing in operations, which is to say investing in their future growth.” As a result, their reported financial growth is increasingly due to getting returns on financial investments rather than generating returns the old fashioned way.

Dive In or Hang Out?

So what’s the big deal you might ask? Corporate investment is cyclical; sometimes companies invest heavily in the future in the form of plant and equipment and other times they take a breather, sort of like what we all do after Thanksgiving dinner. The last time we saw a big binge was the end of the 1990s when Y2K was on everyone’s minds; in contrast, the last few years have been spent digesting the big meal.

That statement is fair — as far as it goes. But beyond cyclicality, I think the data shows an unhealthy sclerotic process lurking in the shadows. Remember the talk about deflation that made the rounds last year? I think the graph is one indicator that the fear of deflation that many of us had is warranted and the reasons for concern are still with us. In a nutshell, this graph shows that companies are raising cash and not investing it in future growth; they’re sitting on it and taking the safe returns rather than gambling on their own futures.

Deflationary trends are exacerbated when companies hoard cash rather than spending it on future investments — when having cash in the bank is better than investing in your own future, serious economic consequences are possible. Corporate innovation slows as cash in the bank becomes more valuable as an investment, because there isn’t anything new to buy, consumers don’t spend except to replace worn out items, and a vicious cycle ensues that ultimately puts people out of work. Lots of people.

I know this sounds a bit alarmist, and to a degree it’s intentional but heartfelt. In concert with this graph, I think we also have to consider government borrowing and tax cuts. The original rationale for the tax cuts of the last several years was to stimulate the economy. Regardless of your views of the tax cuts as economic stimuli, objective sources tell us the economy is doing better and interest rates are rising. While the tax cut stimulus has been in place, we have borrowed to pay our current expenses — we’ve been putting off paying our day-to-day bills until some point in the future when economic conditions are more favorable or when others get the bill.

Playing it Safe with Profits

What the Roachdale graph shows is that the cuts have worked or at least that there is no productive use of at least some corporate profits that would otherwise be taxed at higher rates. The result is that those profits sit in bank accounts collecting “safe” returns that contribute to corporate bottom lines but which make no productive contribution to the economy. Plant and equipment — including computer systems and other technology items — that could contribute to future bottom lines are not being bought, at least in the quantities that are needed for the industry to grow well. Meanwhile, we continue to borrow money that will be paid back by future generations.

What to do next?

To paraphrase a famous person whose name I have forgotten, knowing that your profits will be taxed concentrates the mind wonderfully to spend those monies on tax deductible investments in plant and equipment that may bear larger profits in the future. It’s a situation with plenty of upside. So my recommendation, should anyone ask, would be to rescind the tax cuts; they’ve done their job and further effort on the tax and finance side would be analogous to pushing on the proverbial string.

As luck would have it, I have seen many new ideas bubbling up that support new or enhanced business processes — just the kind of things you want to invest in to gain market advantage. Moreover, these ideas are not limited to emerging companies though there are many that fit the description. Many established technology vendors have spent the last few years engaged in significant R & D projects and we can expect many to debut after the summer. But all new products need the oxygen that would be generated by enterprises once again focusing aggressively trying to beat the competition and sell more, instead of pursuing paper profits.

For example, in the front office, which I am more familiar with, it seems many, but far from all, companies in CRM are making noises about supporting business processes. While some, such as Siebel, have been talking about — and supplying products for –delivering CRM as a business process rather than as discrete transactions for several years, others are relatively new to the game.

CRM systems oriented more toward business processes rather than transactions, are at the heart of what knowledgeable industry observers like Peppers and Rogers and Shoshana Zuboff, and the folks at Walker Information have been calling for over the last several years. If you look at CRM as a series of discrete transactions you end up with customers who may be satisfied with the individual transactions but who are not disposed to being loyal. That’s because a transaction is like a squeaky wheel, especially when it comes to service.

Without support for true processes that proactively engage customers, many of them will simply defect to a competitor when the original value they bought runs out. So, the essential message I see coming from customer centric thought leaders is — your customer is a better investment for all your mounting cash on the sidelines than simple financial investments.

Denis Pombriant is a well known thought leader in CRM and the founder and managing principal of the Beagle Research Group, a CRM market research firm and consultancy. Pombriant’s latest report, CRM WizKids: Taking CRM to the Next Level, identifies emerging CRM leaders and their innovative technologies. In 2003, CRM Magazine named Pombriant one of the most influential executives in the CRM industry. Pombriant is currently working on a book to be published next year. He can be reached at [email protected]
Get Permission to License or Reproduce this Article

The ROI of CRM

Rx for CRM: Build for Trust

CRM, Vertical Markets, and the Rise of the Partner