Sprint recently presented a mock-up Emergency Response Team deployment of its technology at the Los Angeles International Airport, LAX. Its gear is oriented toward widespread natural disaster communications failures rather than short-term outages or network congestion like that experienced after the Boston explosions.

Sprint staged its demonstration for the benefit of business and local government continuity managers. However, some of the equipment designed for rapid disaster deployments is not restricted to government agencies and large companies, but is available to small and medium-sized business too — and even to individuals. 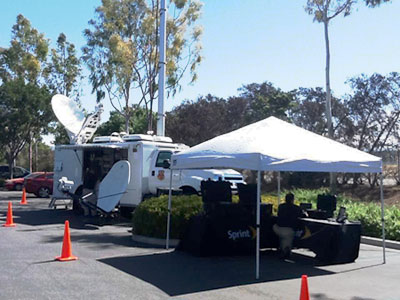 There are two principal tools Sprint deploys for communications during a disaster.

First, backhaul during an incident is usually provided through a satellite feed supplied via a dish mounted on a light truck — a SatCOLT, or Satellite Cellular on Light Truck. The satellite links to the national Sprint network. A bubble of local cell service is then provided by a cell mast antenna on the same truck. The mast supplies local signal for voice and data; the dish supplies the backhaul.

Second, a cache of Sprint phones and data aircards, available for short-term rental to government agencies and enterprises, is stored on the same vehicle, as well as in other strategic locations. Sprint has 25,000 phones available nationally, charged-up for on-demand rental.

A Suitcase Full of Phones

Alternatively, organizations can purchase ERT Go-Kits. Each of these Pelican-like hard cases weighs up to 68 lbs. and contains as many as 50 charged phones that can be stored on the customer’s premises. 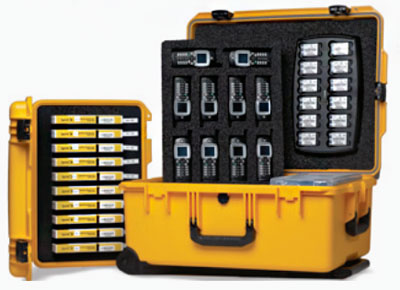 ERT Go-Kits can be assigned to the manager in charge of continuity and stored away from a susceptible workspace for security.

In many cases, ERT pricing is based on a per-minute, as-used rate, rather than monthly post-paid contracts.

Sprint provides a toll-free hot line number that can be used in the event of an incident to order on-demand services — without prior arrangement — including the SatCOLT truck, which may already be rolling from its base in Irving, Texas, as has been the case in former large-scale disasters like the Joplin, Mo., tornado, and Hurricane Sandy.

Any Sprint customer — organization or individual — in range of the SatCOLT’s cell mast can obtain a signal if there’s one available.

How does a business begin to approach the issue of communications continuity in a disaster? First, it must understand its needs.

“It’s assessment of the organization,” Tanya Lin-Jones, Sprint’s ERT manager, told TechNewsWorld. “What resources do we already have? What resources can be restored first? And then what’s the next phase?”

Resources already in place could include existing phones or an ERT Go-Kit, she noted. Provision of those kinds of tools is basic. Planning for the next phase could include a more elaborate kit — perhaps landline failure failover devices, like Teles’ Cellx.

There are several factors for businesses to consider when planning for communications continuity in a disaster, Teles’ Kevin Edwards told TechNewsWorld.

“Do they need to stay in contact with vendors?” he asked. “If so, then what are the critical needs — voice or data? They need to have a solution in place.”

Other turn-key Emergency Response Team tools offered by Sprint, that fit into a hardened-planning approach include cloud-based Microsoft Office 360; a geo-tagging vehicle location awareness product that lets customers see where their resources are located; a fly-away satellite kit that supplies dedicated bandwidth for data and voice calling in a self-assembled flight case; and a simple enterprise messaging gateway that lets customers send crucial messages outside of normal structured in-building Internet LANs.

“What’s the first thing that goes down in a disaster? It’s power and telecommunications,” said Bill Springer, the Sprint account manager who staged the LAX mock-up.

Those are words to remember when we’re observing the inevitable next televised natural disaster — or worse, are in it.