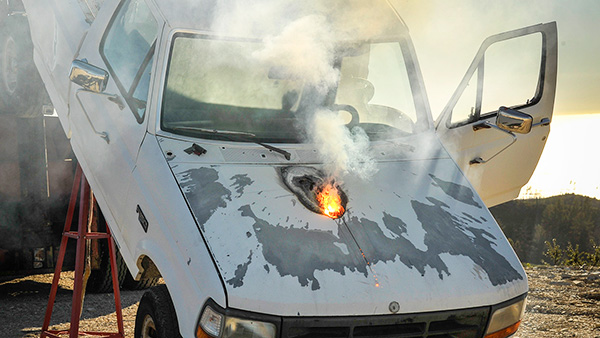 Boring clean through the engine of a truck mounted on a platform more than a mile away, ATHENA decommissioned the running vehicle in a matter of seconds — and the technology is now ready for wider adoption, according to Lockheed Martin.

The test moved ATHENA a step closer to implementation in the weapons arrays of attack helicopters, jets, ships and trucks.

The Future Is Now

That may seem far out and far off, but ATHENA’s successful field test proves all the tech components for meeting military specifications have been developed, said Lockheed Martin spokesperson Lynn Fisher.

“Tomorrow is already here, and Lockheed Martin is ready to provide these cutting-edge solutions now,” she told TechNewsWorld.

Based on Lockheed Martin’s Area Defense Anti-Munitions, or ADAM, laser weapons system, the 30-kilowatt ATHENA weapon uses an array of fiber optic lasers, a technique known as “spectral beam combining,” to produce a unified beam that’s much stronger and more lethal than the unfocused efforts of 10-kilowatt blasts.

The difference between ADAM and ATHENA, according to Fisher, is their laser sources.

Lockheed Martin developed ATHENA from off-the-shelf components available to commercial buyers, along with its own beam and fire control software and algorithms, she explained.

“At the time the ADAM prototype was designed, approximately four years ago, 10 kilowatts was the highest power single-mode fiber laser with good beam quality that was available,” Fisher said. “We believed 10 kilowatts to be adequate for defeating simple threats, and ADAM has successfully validated that premise.”

For those concerned about the risks of directed energy weapons like ATHENA and ADAM, they are relatively few, said Frost & Sullivan Senior Industry Analyst Michael Blades.

On the other hand, there are many benefits to using the nascent weaponry.

“The cost per firing is low compared to traditional ammunition, and range capabilities are outstanding in clear skies,” Blades told TechNewsWorld. “Also, as long as you have power, you never run out of ammunition.”

“Additionally, DE weapons can ‘dazzle’ sensors so an adversary aircraft cannot attack,” Blades noted. “This would be useful when you don’t want to shoot down an armed unmanned aircraft for fear it might cause collateral damage on the ground.”

A major drawback of directed energy weapons is their inability to lock onto small and fast-moving vehicles. The effectiveness of these weapons also can be hampered by haze and smoke.

Despite their vulnerabilities, directed energy weapons have been gaining traction for the last few years, and they’re on track to place traditional weapons if testing continues to go well, Blades said.

This week’s test was pivotal, said Lockheed Martin’s Fisher, and its success indicates the technology is ready for adoption now.

“Directed energy is a crucial revolutionary technology,” she maintained, “because of the advantages of speed, flexibility, precision and low cost-per-engagement that only are possible with lasers.”