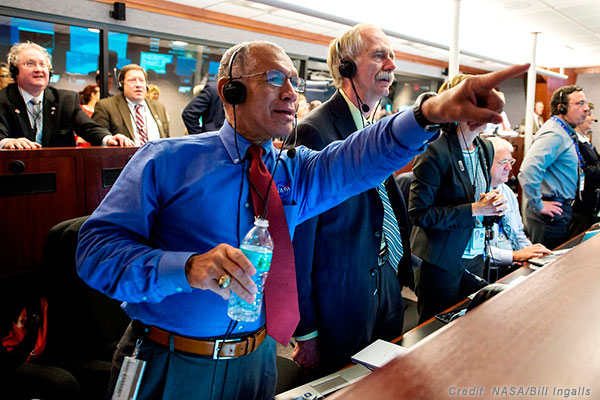 NASA’s Orion spacecraft on Friday successfully completed its first test flight, splashing down in the Pacific Ocean west of Baja California at 8:29 a.m. PST after orbiting the Earth twice in roughly four and a half hours.

NASA Administrator Charles Bolden, left, NASA Associate Administrator for the Human Exploration and Operations Directorate William Gerstenmaier, and others at Cape Canaveral, pictured above, react as they watch the Orion spacecraft splash down in the Pacific Ocean more than three hours after launch.

Orion traveled some 60,000 miles during the mission and journeyed 3,600 miles into space — 15 times more distant than the International Space Station and farther than any ship designed to carry humans has gone in more than 40 years.

The mission is a critical step in NASA’s journey to Mars.

“We have not had a spacecraft designed for humans to fly so far since Apollo 17,” said Mario Livio, a senior astrophysicist with the Space Telescope Science Institute.

“This puts the exploration of space back on the map in a big way,” he told TechNewsWorld.

Orion lifted off atop a United Launch Alliance Delta IV Heavy rocket at 7:05 a.m. EST from Space Launch Complex 37 at Cape Canaveral Air Force Station in Florida. A Thursday launch attempt was scrubbed due to valve issues that could not be remedied before the launch window closed.

Though no crew were on board on Friday, Orion is designed to take humans farther into space than they’ve ever gone before.

In future missions, Orion will launch on NASA’s new heavy-lift rocket — the Space Launch System — which is more powerful than any rocket ever built, NASA said.

Among the goals for Friday’s flight test were to evaluate the spacecraft’s launch and high-speed re-entry systems including avionics, attitude control, parachutes, and a heat shield that must be strong enough to protect astronauts from temperatures as high as 4,000 degrees Fahrenheit.

Orion passed through the Van Allen radiation belts, allowing mission planners to assess radiation levels inside the cabin. The spacecraft’s cameras had to be turned off during that phase in order to protect them.

During re-entry, it hit the atmosphere at a speed of 20,000 mph and encountered heat levels about 80 percent of what it would endure during a return from lunar orbit with astronauts aboard.

Following splashdown, teams from NASA’s Ground Systems Development and Operations Program worked with U.S. Navy and Orion prime contractor Lockheed Martin personnel to bring the spacecraft into the well deck of the USS Anchorage, an amphibious ship with a protective enclosure that allowed Orion to “float” on board without having to be lifted by a crane.

“The first Orion flight test is well worth the NASA hype, because it keeps the U.S. in the game for future progress at a time when other players around the world are also gearing up new spacecraft,” said James Oberg, a retired rocket scientist who is now an author and media consultant.

Both the European Space Agency and India, for instance, are planning space tests of prototype crew-carrying modules in the near future, he told TechNewsWorld.

Russia, meanwhile, “is preparing the first launch, perhaps before the end of the year, of its own new-generation heavy space booster, the Angara-5 — the first big new Russian space rocket in three decades,” Oberg added.

Then there’s China, which is “pushing ahead with an entirely new launch site on far-southern Hainan Island, with a new generation of space boosters for space station and human deep space missions,” he said.

Roughly a billion dollars a year are allocated to the Orion project, Oberg pointed out.

“You build and fly what you can afford. In buying power, that budget is maybe a tenth as much as Apollo was spending during the Moon race,” he said.