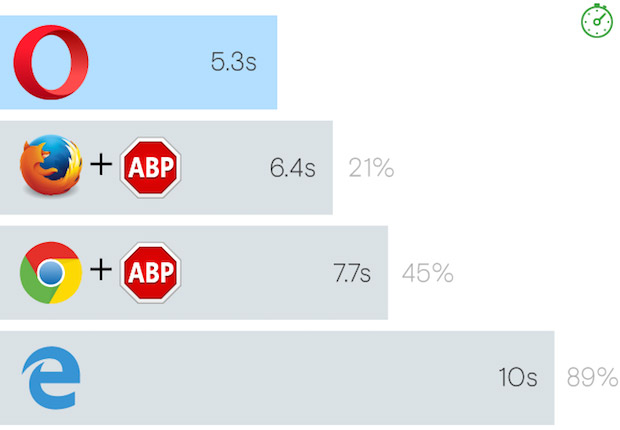 Opera on Thursday announced that new version of its desktop browser will have ad blocking built in.

Users can block ads in other browsers, but only through add-on programs called “extensions.” With ad blocking built in, Opera’s Web engine can perform the task better than extensions.

“People care about speed in a Web browser, so when you’re developing a browser you always have to think about speed,” said Krystian Kolondra, senior vice president for global engineering at Opera.

While working on the next version of the browser, Opera’s developers asked themselves what they could do to give it a speed boost.

Although using extensions to block advertising can have a positive impact on performance, Opera’s developers discovered that by blocking ads at the Web engine level, they could load Web pages an average of 40 percent faster than with an ad-blocking extension.

“That’s possible because the extension is running inside the browser, while our ad blocker is working at the network level,” Kolondra explained.

Ad blockers have gained popularity in recent months, particularly in the mobile world.

Both Samsung and Apple have announced support for ad blockers in their mobile browsers.

Meanwhile, in Europe, mobile operator Three last month announced that it would start blocking ads at the network level for its units in the UK and Italy. If successful, the initiative could be expanded to other Three markets around the world.

“If a provider doesn’t have a mobile-optimized site, it’s a terrible experience for users, because you force them to download a bunch of stuff that sucks away their data,” he told TechNewsWorld.

Because Opera has such a small share of the worldwide browser market — less than 2 percent — it remains to be seen how much of an impact this upcoming version of the browser will have on advertising.

“If Opera were the dominant browser, it would be a different story,” said Greg Sterling, vice president of strategy and insight at the Local Search Association. “But Opera is a very small player at this point.”

“It’s signfiicant, though, in that it represents momentum in favor of ad blocking,” he told TechNewsWorld. “It’s yet another company getting on the ad-blocking bandwagon.”

It will take some time before the full impact of Opera’s move can be determined, said Bryan Yeager, a senior analyst with eMarketer.

“If we see over the next few months this has been something that attracts more users to Opera and its share increases, then there may be some legs to this — and maybe the ad industry should take note,” he told TechNewsWorld.

“Opera is being pretty opportunistic in latching onto this trend around ad blocking and providing some differntiation from the extension-based approach,” Yeager added.

Does Opera feel it’s undermining the Internet economy by building ad blocking into the code of its browser?

“We understand that advertising is necessary for the economy of the Internet,” Kolondra said. “Internet services could never be free without ads.”

“However, we ask ourselves why some sites with ads only see a marginal difference in page-loading speed, while some load 90 percent faster when we disable the ads,” he continued.

“If the ads were better — more relevant to users, lighter so they don’t slow down page loading — then we wouldn’t have the problem that we have right now,” Kolondra maintained.

There are more reasons for using an ad blocker than faster page loading, noted Ben Williams, communications and operations manager for Eyeo, maker of AdBlock Plus.

“People use ad blockers because they are concerned about their privacy and their security,” he told TechNewsWorld.

“There are lots of reasons for using ad blockers, but the message to the online ad industry is you need to do something better,” said Williams. “If ads didn’t take so much time to load, if they weren’t so intrusive, if they were more upfront about the tracking that’s going on, then maybe people wouldn’t feel the need to download an ad blocker on every device that they have.”