This is the first in an ongoing series featuring interviews with leaders in the open source community. 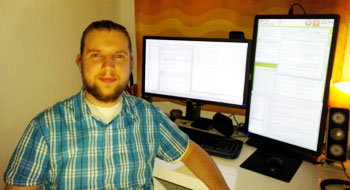 He was chosen to lead a discussion on open governance at the Summit of New Thinking in Berlin. The open innovation concept is what got him interested in free software communities while studying organizational psychology, and it’s an idea he tries to merge into growing the openSUSE community.

Poortvliet now has a decade of evangelism for the free software movement as well as a unique perspective on the open source community. Poortvliet holds a degree in organizational psychology from the University of Utrecht.

SUSE was established in 1992 when it introduced a distro now known as SUSE Enterprise Linux. Novell acquired SUSE Linux in January 2004 and released the SUSE Linux Professional product as an open source project.

The OpenSUSE project focuses on three main goals: making OpenSUSE easy to use, leveraging open source collaboration to do so, and simplifying and opening the development and packaging processes. OpenSUSE is unique among distros in using the KDE interface as the default desktop environment.

In this interview, Poortvliet discusses the importance of open collaboration and the threats to Linux posed by a proprietary mindset, even among those within the community.

LinuxInsider: You have an unusual background as a non-technical Linux user. What led you to becoming the OpenSUSE Community Manager?

Jos Poortvliet: I’m not a developer. I’m a psychologist. But my wife is a programmer. I was studying psychology over 10 years ago. Back then I also played around with Linux. I was quite fed up with Windows. I found the connection between psychology and Linux very interesting. I was studying organizational psychology and the behavior of people within organizations. You have to admit that the whole free software thing from an organizational psychology point of view was rather peculiar. All these people are putting in all this effort in their free time writing software often without getting paid. Sometimes they do get paid, but that is in their weird, self-organizing, role-managed structures. That’s what got my attention on the community side. When I got involved with this community software structure 10 years ago there were not studies done on it. So I got involved in studying the behaviors. Slowly, that’s how I got sucked in.

LI: Now that you got sucked into Linux, what is involved in managing a major software community?

Poortvliet: My title is a SUSE title. I want to make that clear. I do what I do within OpenSUSE. It’s pretty much an internal role. What I do is different from a project leader. First of all, I am not a technical person so things would be pretty bad if I would be calling the shots. Much of what I do is involved with helping to market OpenSUSE. For me, it’s not just managing the community forum. It’s very much about keeping an eye on the culture and atmosphere of projects and trying to create or keep circumstances that allow the community to grow and also look for the future there.

LI: What changes have you observed in the Linux culture?

Poortvliet: So now as a community manager, this is my job. I try to guide this process and improve this process. I help people work together and collaborate and create the right circumstances and culture in which they can do that.

When you talk about change in the last five years, I see a number of things that have changed. The mere fact that now there is a lot of research on community behavior tells you that there has been a shift in how it is perceived. Ten years ago we were at the point where Microsoft described us as a cancer. That’s not the case anymore. My wife, Camila, works with Microsoft. They collaborate with things like LibreOffice, OpenOffice back then. Microsoft contributes to the Linux kernel.

The changes became evident. That caused companies to start looking at how people were running things and why open source communities did things the way they did. Of course, those studies resulted in companies actually adopting a lot of the practices they observed. Maybe not all of the philosophies, but a lot of the practices of open source software. All of this is quite interesting, I think, because it works.

So these things are being realized by more and more companies. The result of that is a more professional growth of much of the open source software. The rest of the IT world is morphing into something that works better with free software. I think that has really brought a big change.

LI: Do you see those changes reflected in big proprietary software companies?

Poortvliet: I bet that even Microsoft today bases many of its internal workings on something similar to the way open source communities work. I bet that is the case at least with their more successful departments. It just works. Commercial software developers have to adapt. Look at the Apache Project, for instance. It is more a collection of companies working together to create a product. It is not a group of volunteers. It is really a collection of companies. That model is well proven these days.

This model replaces the traditional way of developing a product. That involved assigning MBAs and engineers and supervising and designing plans. Instead of that the volunteers are all working together. They agree they all have different goals and are all competitors. It’s okay. Just let the engineers do their thing and don’t bother them too much. What actually happens in this model is you just keep everything else out of the way.

LI: What do you see as the main reasons for OpenSUSE possibly becoming the de facto choice in enterprise?

Poortvliet: I think it is the result of the ecosystem that SUSE tries to foster. As well as, of course, the product itself. The slower release cycle and focusing a bit more on stability always helps. SUSE considers it really important that its tools are used by a growing number of companies and individuals and projects. We expressly built the Open Build Service for all distros. That is not just a SUSE thing. I think that open attitude gives people a sense of trust for OpenSUSE. It’s a dependable platform. I think it shows a lack of trust if you try to build a closed ecosystem.

LI: How do you see trust as the salvation of open source reliability?

Poortvliet: If you start suing your competitors, it means that you don’t believe your products will be able to compete on their own merits. Otherwise, why would you sue? This is the same with free software. As soon as companies start building their own ecosystems and start trying to do their own thing, it means that they don’t have a lot of confidence in their own product in open markets. Otherwise, why would they close their markets off artificially. SUSE doesn’t do that. SUSE believes in working with everyone else and being as open as possible.

LI: What makes OpenSUSE rock as a popular distro?

Poortvliet: First of all, I am very much a Linux end user. I am not a distro developer, and I don’t do really fancy stuff. The differences between the major distros are really not that big. OpenSUSE’s slower release schedule gives it an edge among the other top contenders. OpenSUSE is more stable. All three distros are fairly equal in hardware support so few differences exist there.

OpenSUSE offers a lot of choice. What I like about it is I think OpenSUSE caters a bit more to the heavy users. Fedora is trying to push the state of Linux technology. They are doing really good at this. If you are not a distro developer, it is a little bit of a painful thing to run Fedora. The newest releases break things. When you are trying to change and improve things, sometimes you break things. That’s part of the game. That is precisely not what we are doing. We are trying to build a workhorse. Look at Ubuntu. They are trying to produce a simple Grandfather-use case. And they are really good at that. With OpenSUSE you can do really technical things quickly and simply without resorting to the command line like setting up a server. OpenSUSE is very stable and has a lot of tools to get things done. Every Linux distro has all of these things, but with the others you have to dig a lot deeper to get things done.

LI: In light of what you just said, do you see the likelihood of ever having a one-size for all Linux desktop that would compete against Windows and OSX?

Poortvliet: Clearly the Linux desktop ecosystem if fragmented. Normally what you see when something is maturing is the choice gets smaller. Text editors are down to a good half-dozen. Not many new music players are around. Years ago, we saw a lot of different Linux kernels because every distro maker used his own variety. Once a problem is mostly solved, then the number of players goes down. For the desktop for some reason that’s not happening. Maybe the desktop is too complicated to get it done in the free software way. I personally think that all the fragmentation is not very good. But nobody wants to give up their thing. I think it would be best if we had more collaboration on the desktop. But several people within the Gnome community, for instance, said they see no benefit in collaboration. That will definitely doom the Linux desktop to obscurity, which is where it is now. I don’t think that without any collaboration the Linux desktop will ever become unified.

The market won’t mature until we are done with the basics. And by splitting our efforts on the desktop, we will never be done with the basics. There is a self-fulfilling prophecy going on there. I believe there is a very small number of people that are blocking collaboration. If they can step over their egos and see it would be better for the world in general, then maybe the Linux desktop could become relevant. If we don’t stop reinventing the wheel, we could just as well be developing proprietary desktops.