OpenArtist Is a Linux Distro Prodigy

OpenArtist is an infant Linux distribution that holds impressive promise for users heavily involved in graphic productivity. Based on Ubuntu 12.04, openArtist is infused with audio, 2D and 3D graphics, and video production tools, plus Blender software. 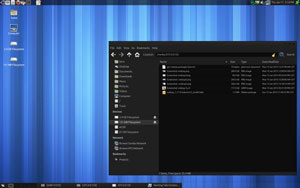 Normally, I shy away from reviewing elementary-stage distros. Alpha releases are often too nonfunctional to offer any real work usability. They are simply proof-of-concept versions. This is not the case with the openArtist distro, however.

After hearing a few colleagues rave about openArtist, I threw caution to the wind and checked it out. I was very impressed with its robust operation and innovative approach to user configurability.

OpenArtist is not the only distro created specifically for creative types and GNU/Linux users who favor free and open source software. A few distros that already blazed this path for graphic artists include Ubuntu Studio, ArtistX, PureDyne, GNUartist, and AV Linux.

Those alternatives to openArtist are mostly based on either Ubuntu or Debian Linux and are much more developed with very intricate menus. However, they also share a common design element. They are very selective in the combination of software included, so users still have to track down and install specialty packages not included in the default distributions.

OpenArtist, on the other hand, has a streamlined user interface reminiscent of GNOME 2. There is no need to fuss over various shells concocted to replace the so-called GNOME 3 “improvements.” Plus, it is packed with a menu stuffed with software packages organized by artistic function. You even get a choice of multiple versions for some design packages, such as Blender.

OpenArtist’s developers, who are not clearly identified on the website, want to make creative open source software more conspicuous. They try to eliminate the need for users to hunt for specialized software and struggle with configuring each installation. The developers do not rely just on the Ubuntu/Debian repositories. They build some packages from scratch for openArtist.

Nor do the openArtist developers remain within the confines of open source offerings. They include some programs which are available as freeware, public domain and abandonware. openArtist collects and combines these into one ready-to-use distribution.

Another design hallmark with openArtist is the availability of more than one tool to complete a task. The idea is to have personal choice abound. If one program fails, one of the others will work.

The developers are somewhat source-agnostic. They reason that if a software package has value to graphic artists but is commercial, why ignore it?

Some commercial programs are too widely used to be ignored, if they can be configured to run on Linux. Do not be surprised when you find several live demonstration packages indexed in the applications menu. Two examples are Ableton and Resolume.

The openArtist developers also do not ignore artist-worthy open source programs only available on the Windows platform. Included is WINE, the open source software for running Windows applications on other operating systems. The Q4Wine GUI configuration tool is preinstalled, as are several other Wine-related configuration tools.

Downloading and installing openArtist is relatively trouble-free. Given its status as an alpha release, that is a good recommendation.

The current version is the sixth incarnation released as an alpha on Oct. 31, 2012. The downloadable ISO file is only available for 64-bit systems, however. The fifth incarnation, released on Oct. 2, 2011, is a beta version also for 64 bit only.

I was first tempted to work with the older beta release. But a quick comparison of the changes built into the current alpha release convinced me to stay with the newer version.

The pleasant side is that the alpha version runs very well as a live session. It mapped all of the hardware without any glitches and instantly connected to my wireless Internet. The installation to my test computer was flawless.

The Graphical User Interface (GUI) is pure classic Linux. No look-alike MATE or Cinnamon strap-ons over GNOME 3 appearances. The user interface is uncluttered and classically simple.

If nothing else worked — but it all did — openArtist still would have had me with its default inclusion of four virtual workspaces. These were already waiting on the bottom panel with the switcher app running.

The remainder of this bottom panel is reserved for docked windows of each open app in the current workspace. The top panel holds the Main Menu button, notification area and several standard Linux panel apps.

As you might expect, including seemingly unlimited numbers of software packages on a single installation DVD defies the laws of physics. So the openArtist development team contrived a trick, of sorts, to save users from having to hunt for software through distro repositories.

The solution comes through the addition of an installation mechanism built into the Main Menu. The menu provides a hover bubble that displays a sometimes detailed description of the software. If it is not already installed, the entry displays a gray computer screen icon next to the app name. Installed apps display that program’s colored icon.

To install an item from the menu, right click the app’s name. That launches a script that opens an install dialog box asking for the user’s password to continue. If you uninstall an application, it will revert to a gray listing in the menu entry. Rather than complicate matters with a distro package manager, openArtist uses the Synaptic Package Manager to find and install open source titles not listed in the Main Menu system.

The openArtist distro has all the makings of a first-rate specialized OS for creative artists and digital editors producing audio and video projects. The current alpha release seems well on its way for prime time users.

Given the long interval between the last beta release and the current alpha upgrade, would-be users may want to wait for signs of continued development before adopting it for permanent use. Still, openArtist is an interesting specialty distro unlike other Linux offerings for graphic and digital artists.