You may recall that even though this is a technology column, I did predict that Nancy Pelosi would be a problem for Obama, and that both Meg Whitman and Carly Fiorina would lose. A few of us have been discussing this, and what was missing in all three cases is leadership.

In the technology market, the most visible leader is Apple and the strongest non-Apple leader may not be Microsoft, HP or Dell — but Best Buy. In the context of what was an avoidable thumping and a presidency that is still on track to be a single term unless the leadership problem is addressed, I’ll examine Best Buy’s leadership this week.

I’ll wrap up with my product of the week: the Corsair HS-1 gaming headphones that are priced right, focused, sound great, and trade off appearance for component quality — so few know of them.

Obama, Palin and the Importance of Leadership

One of the things that can be frightening about people who have charisma is that if they’ve never learned how to lead, they can do some rather horrible things to organizations. Jimmy Carter captured the hopes and dreams of those coming out of the Vietnam War and was so incredibly clueless as a leader that he personally mounted a rescue attempt of Iranian hostages that took itself out.

Obama allowed Nancy Pelosi to lead on healthcare, and that decision has nearly taken him out of power. (If you recall my February 2009 prediction, I’m holding back the “I told you so” poorly at the moment). You may also recall I predicted Whitman and Fiorina would fail earlier this year, showcasing that I really suck at being modest. Hey, it goes with the turf.

Both Palin and Obama are long on platitudes but short on leadership. Palin couldn’t even lead her daughter to vote in this last election, suggesting that if the core problem is leadership, she’d just make things worse. Coming up with ideas people like isn’t that hard — executing is hard. Both politicians have been long on ideas and short on execution.

Palin didn’t even finish her term as governor, which might have given her the training she needed to run a country. Whitman and Fiorina largely lost due to their own backgrounds and lack of political experience, and neither was much of a leader.

In the end, the test of a leader is not just that some follow them — it is that they can actually get the job done and survive any resulting backlash. Reagan, with his background as a governor, had the right stuff; Carter, as a senator and governor of Georgia, did not. [*Correction – Nov. 9, 2010] President Carter was the most aggressive on getting the country off foreign oil. Had he been successful, we likely wouldn’t be in the sustained financial mess we are in at the moment, so there is a cost to failure.

Obama has two years to discover an ability to lead, or the rest of his life to regret his failure. Palin has two years to learn from Obama’s, Fiorina’s and Whitman’s mistakes, or her run for office is likely to be very similar to Dan Quayle’s. Leadership is a skill we have undervalued too long in this country, and we probably should — and will try — to fix that in the next election. The clock is ticking. Oh, and I’m also a fan of both hope and change — I’m just a bigger fan of leadership that leads to actual execution.

When it comes to leadership in technology, the bar is set by Apple — and the only company currently of its scale that comes close isn’t an Apple competitor. It is actually Best Buy. Best Buy has been doing for the retail process what Apple has been doing for product, and if you haven’t been in a Best Buy store in a while, it is time for a visit — particularly if you are shopping for a new smartphone.

I started out in retail, and I used to cover Apple Store openings for Cnet, back when it had a radio station. I still think Apple has one of the best retail designs that has ever been created.

I’ve been doing my pre-holiday review of carrier stores, Apple Stores, Fry’s — and the best experience I found this year was at Best Buy. I met with their team earlier this month to figure out why Best Buy was doing so much better.

First, it has been focusing like a laser on customer satisfaction — particularly NPS, or Net-Promoter Score (EMC is one of several companies that use NPS heavily). Evidently, when Best Buy started to use this system a couple of years ago, its NPS score was in the high 30s (where most tech companies typically reside). It’s currently in the mid-80s, which is higher than Apple’s typical scores. In fact, Best Buy is the only retailer I’ve ever seen outscore Apple.

It got there by reducing its employee churn (in the store I visited, for example, the cellphone specialist had been there since it opened seven years ago); increasing training; and focusing more on creating customer loyalty than on point sales.

In other words, Best Buy takes the approach that it’s important to help you buy the right product, rather than the more typical “any product and get you out of the store” approach — and that is pretty much unique at the moment.

You can’t get this at an Apple store, because it will only have iPhones, and iPhones aren’t perfect for everyone. In fact, when given a choice at Best Buy, people currently appear to prefer the new HTC Evo to the iPhone, based on recent sales. This result is consistent with this online survey.

Since Best Buy cares more about you being happy than buying any particular phone, it can provide better unbiased help than a similar clerk in an Apple Store or at a carrier store.

I’m a big fan of choice, and what is interesting about this one is that people seem to prefer Sprint over the other carriers at the moment — thanks to the Evo — which is 180 degrees from what had been happening. I’m still on T-Mobile myself.

Best Buy is doing similar things for other products, and I’m particularly looking forward to seeing its coming efforts for electric vehicles because, as many of you know, I’m on my fourth electric bike (second e+), and I’m a huge fan of green transportation products.

This is because, like Carter, Obama and pretty much every U.S. president back to Nixon, I agree we have to get off oil if we are to survive as a nation — and Best Buy appears to be setting up to take a leadership position in this fight as well. To do that, someone has to execute — and in retail, that appears to be Best Buy.

Wrapping Up: Let’s Learn From the Folks Who Do the Right Thing

It is easy to pound on companies and politicians who do the wrong thing, but we also need to remember there are companies like Apple, Best Buy and EMC that do the right thing with regard to their customers, and some decent politicians like Diane Feinstein and Ronald Reagan, who clearly set the bar with regard to political excellence for their respective parties. In the private sector, both Bill Gates and Warren Buffett stand out as leaders who should be emulated more, at least in recent years.

Perhaps it is time that we — and I include myself — should focus less on spectacular screw-ups and more on spectacular human successes and true leaders. It’s just a thought, and I’ll try to remember it, because clearly this is a pot-and-kettle thing with me as well.

I’m a gamer. Most every night, I’ll drop in an hour or two of gaming, often on my Steelcase WalkStation — a treadmill desk I previously designated product of the week — so I can work on my growing middle (and my wife would just as soon not hear what I’m doing). 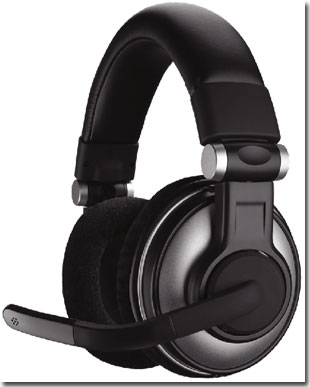 Headphone products in the gaming space tend to trend toward flashy and cheap. I’ve actually had a couple of pairs literally fall apart while I’ve been using them. The Corsair HS-1 headphones trade off flashy for a robust design and solid components, though they are tuned for gaming and not music, which means deeper lows and brighter highs.

If you want music accuracy, you’d be better off with a set of headphones from M-Audio (I have a pair of their headphones, plus their microphone and monitors for voice work).

The Corsair HS-1 headphones aren’t light, but they have a large head pad and soft ear muffs so you can wear them for hours, and the built-in microphone is robust and good enough for both gaming and VoIP phone calls.

Typically priced at just under US$100, like much of Corsair’s product line, they won’t break the bank — and the volume controls on the cord are lighted, so you can actually see them in a darkened room (that actually is kind of important, because I play in the dark).

They aren’t flashy — just well-engineered. They provide a great experience, so they are an obvious candidate for my product of the week. One thing, though, if you get a pair, do load the software (they are USB headphones), or you won’t get access to some of the features. Corsair has grown to a half-billion dollar company in revenue by focusing on high quality and customer satisfaction, and that too is a result of good leadership.

*ECT News Network editor’s note – Nov. 9, 2010: The original publication of this article stated “Carter, as a senator, did not.” Rob Enderle is a TechNewsWorld columnist and the principal analyst for the Enderle Group, a consultancy that focuses on personal technology products and trends.
Get Permission to License or Reproduce this Article