ECS — Nvidia’s Emerging Companies Summit — is a place to check out some of the firms that could become the next breakout company. It didn’t disappoint this year. Among the highlights: A firm that could redefine advertising connected to Web pictures and videos; a company that could put your entire desktop and gaming experience in the cloud; one that could help you actually hear that TV you see at a restaurant or bar (one of my favorites); and one that equips a little box to do a workload that typically would require a server farm.

This was an amazing event, and Nvidia gave US$100K to the firm the audience and judges thought was the most amazing among the small, young firms presenting.

I’ll close with my product of the week, which comes from Nvidia but will be provided by Tesla, Audi, BMW, and a few other car makers and make the cars of today obsolete.

Map-D is the company that won the $100K, and it didn’t even have venture money. This is a little bootstrapped company that has figured how to perform analytics in graphics chip memory with the goal of identifying malicious activity.

Considering the concerns surrounding security, thanks to the NSA and the huge Target breach, this is not only an innovative approach to the problem, but also an incredibly compelling one. This is the kind of thing you wouldn’t think a little company could take on, yet it wowed the audience and a panel of experts, who gave it the nod over one I thought was even better.

This may suggest I need to think deeper, because the firm I was more excited about is AudioStream TV, which has developed an app that allows you to stream the audio from the TV you are watching but can’t hear at a restaurant, bar, airport, etc.

I experience this quite a lot. I’ll be across the room from a TV showing some really interesting breaking news story, and either the sound is turned off or I just can’t hear it.

I get the biggest kick out of Mainframe 2. It presented in my session — I was one of the morning judges. Mainframe 2 puts your desktop in the cloud and is one of the most aggressive users of Nvidia Grid, the platform Nvidia created to host desktops.

It’s made some impressive advancements over the last year, and given that I think we’ll eventually do most all of our computing “as a Service,” through services like Office 365 or VMware Horizon (Nvidia announced a huge partnership with VMware at the show), I’m a big fan of these efforts.

Sqream Technologies also presented in my session and was one of my personal favorites (which likely justifies the Map-D decision above).

It implements massive parallel computing power to analyze huge data sets in near real time by using hardware that costs a tiny fraction of the servers that most companies buy to do this work. I personally think analytics will change the world, and this solution makes big analytics not only fast, but also very affordable.

I believe that in the future we’ll watch video game tournaments like we do real live games. We can sort of do that now, but to get to the kinds of massive audiences major sporting events capture, we’ll need a new technology and approach to the problem.

X-Fire showcased exactly that, and it too was one of my panel’s favorites. It has thought through how to display the games and show the changes in rankings based on gamer performance, making the entire thing far more interesting.

The biggest problem that data analytics companies have been struggling with is organizing unstructured data. Pictures and videos, in particular, are a bitch to automatically index, and you need to be able to do this to connect ads to the items folks are viewing and to sort them more effectively.

WeSee can process billions of images a day to connect them to the appropriate ads, and it apparently has taken the big European markets by storm as a result. It is kind of amazing what WeSee has been able to accomplish.

OK, Kvantum is a company that should really worry Google and Facebook, not because it competes with them, but because its technology analyzes ad performance and showcases what is working and what isn’t.

Companies spend millions on advertising, and most of the money they spend is largely wasted on online properties that aren’t working. Kvantum could end that. Services like Google and Facebook have benefited because advertisers couldn’t determine where the value was. This tool could shift large amounts of revenue to where it could do more good — possibly away from Google and Facebook.

This company’s offering could have a massive impact on a variety of firms that live off Internet marketing.

G-Cluster is a cloud gaming company that you’ll likely see on your set-top box or TV shortly, if you don’t see it already.

It focuses first on the kinds of games you can play on TVs with remotes, and it has the breadth to host more traditional titles. If you want to play casual games on your TV, this is the company that will probably get you there.

ECS, once again, was amazing — and I only attended a few of the sessions. There were several days of back-to-back presentations by early stage companies that will change the technology world, as we know it, if they’re successful.

We are in the midst of a massive market and technology change this decade, and there’s no place where that is more evident than at Nvidia’s annual ECS conference. Woof…

Product of the Week: Nvidia Automotive

I’m a car guy, and a couple of years back I bought an old Jaguar that I mess with and take to local car events to showcase AV technology. One of the reasons I got it was because you can actually update the radio system. The other is that it’s supercharged (which is kind of a guy thing).

With most cars, the AV systems are obsolete when the car is first sold, and my Jaguar was no exception. A number of us had been pounding on car companies for years to make what they had upgradeable — but until Tesla and Nvidia got together (thank God for both firms) our complaints fell on deaf years.

At Nvidia’s developer conference, which runs in parallel to ECS and is much larger, Nvidia showcased its next generation automotive solution which is modular and upgradeable. 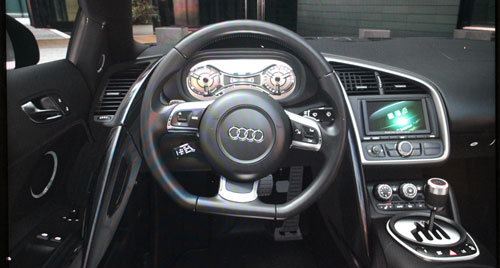 Until now, only Tesla had an upgradeable system (and it goes a bit ape-sh*t with this idea, as it just released an upgrade package that pretty much turns an old Tesla S into a new Tesla S for a fraction of the price of a new car).

Apparently, both Audi and BMW are on board with this, and I know that if given a choice, I’ll buy a car that is upgradeable over one that is not. I actually think this one feature will separate car companies that are around in the next decade from those that aren’t.

Nvidia is carrying this forward to initiatives like in-car WiFi hotspots and self-driving (which it has shrunk down to the size of two paperback books). Now that’s change I can believe in, making Nvidia’s automotive solution my product of the week.