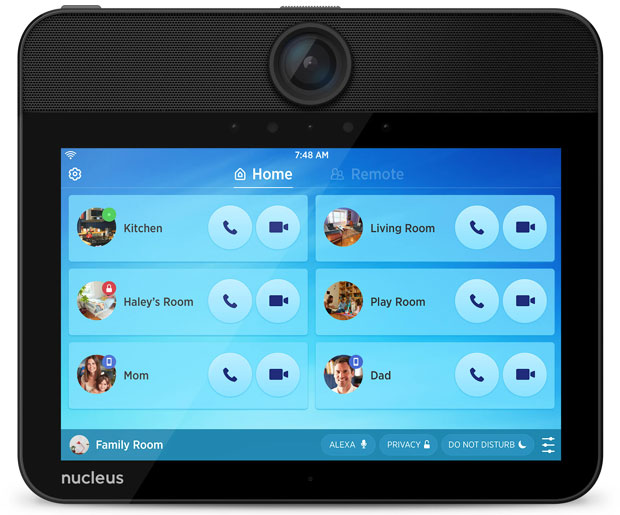 The smart home of the future could be a wee bit smarter with the addition of the Alexa-powered connected intercom system Nucleus announced last week.

The Nucleus intercom, which last fall made its debut without Alexa, is a tablet that connects to a home network through WiFi or Ethernet to allow family members to communicate with each other both inside and outside the home.

The inclusion of Amazon’s Alexa technology in the US$250 Nucleus lets it understand voice commands. For example, users can ask it to play music from services like Amazon Prime Music, iHeartRadio and TuneIn. They also can call up the latest weather report by saying, “Alexa, what’s the weather?” or add an item to a list, for example, “Alexa, add milk to my shopping list.”

“Alexa is more usable than other systems, like Cortana and Siri,” he told TechNewsWorld.

“Amazon got it right. They’ve done a better job of voice recognition command-and-control than anyone else in the market so far,” Kay said. “This is an example of the next wave of devices for the home market.”

“Alexa is like Siri with a store behind it,” he told TechNewsWorld. “It gives Nucleus some added convenience that a straightforward intercom system wouldn’t have.”

The Nucleus intercom has an 8-inch touchscreen with 1280 x 800 resolution, a 5-MP camera with a wide 120-degree viewing angle, a microphone for two-way conversations, and stereo speakers for streaming music.

It can be paired with a smartphone through an iOS or Android app.

“I created Nucleus because I know life can be hectic. As a father of three, there’s tremendous value in having access to my home and family when I can’t physically be there,” said Nucleus CEO Jonathan Frankel.

“Traditional intercom systems are outdated, expensive and hard to install — and video chat services like Skype are tricky for some to maneuver,” he added.

Setting up Nucleus is simple. Turn it on and pick a WiFi network. Create a family and administrator password, and add a name for the room the unit will reside in.

Does the world need a smart intercom?

“Not at the moment, but I could argue there was no need for the iPod until Jobs convinced us we couldn’t live without one,” said Rob Enderle, principal analyst at the Enderle Group.

Connecting people visually has a good and recurring value proposition, he told TechNewsWorld, and like the iPod, Nucleus is easy to set up.

“In a way, it is an Echo-plus, with video communications and surveillance, which should appeal to people that want those extras,” Enderle said. Echo is Amazon’s smart speaker, which uses Alexa to play music, answer questions, read audio books and control some smart home devices like thermostats.

“It’s a nice to have, not must-have,” said Greg Sterling, vice president of strategy and insight for the Local Search Association.

However, it adds to device proliferation, he noted.

“It’s another piece of hardware that needs to be physically present in each room or location, Sterling told TechNewsWorld.

“They have to convince people to invest in this when they can leverage devices already around the home or on their person, like a cellphone, to do what this does,” he told TechNewsWorld.

The promotional material for Nucleus suggests a potential target market for the intercom, observed LSA’s Sterling.

“The reason that multiple generations are featured in its promotional video is that this may be an easier solution for older adults and grandparents than navigating Hangouts, FaceTime or Skype,” he said.

“The appeal for this might be in connecting remotely with people who are technically challenged,” said ABI’s Collins. “They can go to a simple device for a simple application.”

On the other hand, there’s the possibility that Nucleus could be in the vanguard of a new trend.

“Intercoms were a hot item for luxury homes in the 1970s,” Sterling said, “and a visual, voice-activated intercom such as this could bring them back.”