A team of researchers, including engineers from the Los Alamos National Laboratory, this week reported their successful demonstration of a new concept that could provide reliable nuclear power for space exploration. The technology is still years away from the warp drive of Star Trek, but it could provide a means of propulsion for space travel beyond the moon. 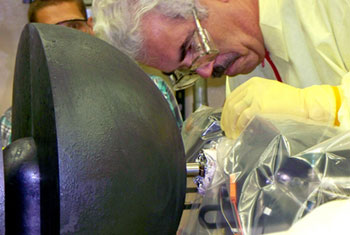 John Bounds of Los Alamos National Laboratory’s Advanced Nuclear Technology Division makes final adjustments on the DUFF experiment, a demonstration of a simple, robust fission reactor prototype that could be used as a power system for space travel. (Credit: NASA)

“This is really a new old system, as it is a new platform build on an old technology,” said Michael Podowski, Ph.D., professor of nuclear engineering at Rensselaer Polytechnic Institute.

“The Stirling engine is an old one,” he pointed out, but “the concept is very healthy. The nuclear factor is not an issue at this point. However, [achieving] efficiency will require a lot more work.

“While the concept is interesting and it makes good use of the elements involved,” Podowski told TechNewsWorld, “it will require more work. It is as simple as that.”

To the Final Frontier

Although progress in manned space exploration beyond Earth’s orbit is not progressing at light speed, there are several projects in the works, and DUFF is just one of many possibilities for getting from here to way out there.

“In general, development of effective and reliable Stirling generators — known as dynamic systems that use mechanically moving parts — could become very important for long duration space flight as an effective way of producing electrical power,” said Michael Gruntman, Ph.D., professor of aerospace engineering and systems architecture engineering at the University of Southern California.

“A lot of work is going on in this area,” he told TechNewsWorld.

This is especially necessary because getting there will require serious power.

“Space exploration requires a long-term energy source,” said Podowski. “Nuclear reactors are certainly the future of space exploration as there are no other sources of energy for such long-distance travel.”

Not Quite Warp Speed

Even with this technology — or something similar to DUFF — it won’t mean getting there at science fiction-worthy speeds. However, it certainly can provide a means to go farther than anything previously available.

“We could have a nuclear-powered rocket that could get to Pluto in two years; whereas a chemical rocket would take seven years,” said Paul Czysz, Ph.D., professor of aeronautical engineering at Parks College.

“We think it is the enabling technology,” he told TechNewsWorld. “If you are really going to do something on this scale, you need to have something other than chemical rockets.”

More importantly, this technology could be what is required to simply get beyond the moon, which remains the farthest point of manned space exploration. Even our closest neighbor, Mars, is considered too far for humans to successfully travel to and return.

“For man’s exploration to Mars with current chemical solutions, you will only get as many astronauts to go [as are willing] to come back as dead bodies. During the trip you’d get a healthy dose of radiation, so it would be necessary to reduce the time in travel,” Czysz explained.

“Nuclear powered space exploration is the only way to get a sizable crew to Mars and provide them with enough resources to survive a year,” he added.

While the DUFF experiment is based on older technology, revisiting it may be the key to future space travel for numerous reasons.

“The key advantages seem to be its ease of manufacture, the fact that materials are readily available within the U.S., and the fact that use of this propulsion technology reduces demand for and thus preserves the supply of plutonium needed for very deep space missions,” said Glen Hiemstra of Futurist.com. “Obviously, a key challenge in space exploration and development is the provision of adequate energy for propulsion — or in the case of human missions, life support.”

Competing technologies, such as solar arrays, may meet some of those needs in near-to-Earth missions, but would be inadequate beyond Mars and certainly not adaptable for deep space exploration, as the Los Alamos study notes.

“Thus the need for an energy source that is long-lasting, not terribly heavy, and reliable,” Hiemstra told TechNewsWorld. “The uranium plus heat pipe plus Stirling engine system seems to fit all of those needs. As proposed, it would be confined to use on small science exploration craft.”

It could be scaled up to provide a power source for long-term colonies as well — on the moon, on Mars, or even for mining of asteroids.

“Elon Musk has recently advocated a program that would eventually send 80,000 people a year to Mars, up to a total colony size of a million people,” added Hiemstra. “Nuclear energy sources such as the one proposed would make such dreams more feasible.”

The biggest hurdle that future space explorers may have to overcome might not be enduring the limitations of space travel but just getting nuclear-powered space vehicles to be accepted. Nuclear tends to have a negative connotation with many people, which leaves some projects grounded.

Are these fears justified? After all, it is a nuclear reactor on a rocket.

“Space nuclear technology, in general, is very well developed and includes radioisotope thermoelectric generators and nuclear reactors as power sources,” said Gruntman. “The former is flying on distant space missions, while the latter — nuclear reactors — are sitting on shelves and could not fly for reasons other than maturity, efficiency or safety. Not only general public, but also engineering education exhibits major deficiencies in understanding nuclear aspects of technology.”

“Even launches of RTG-powered spacecraft cause protests by the anti-everything-nuclear crowd,” he added. “Public attitude toward — or should I say against — nuclear technology is based on ignorance and media-pumped emotions which have nothing to do with reality.”

Without the risk, there will be no reward.

“If we want solar system exploration, we must utilize nuclear technology,” Gruntman stressed.

The irony is that without the risk there could be even greater risk. Earth could be unprepared in the event a science fiction thriller-worthy scenario should unfold.

“In addition, if one day we will need to defend the planet Earth against a civilization-ending incoming comet or asteroid, it will require nuclear technology,” he added. “So, the human race may pay a major price for self-inflicted ignorance.”