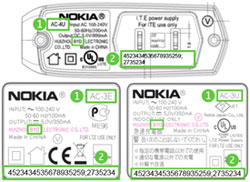 After a flaw was uncovered in some of its handset chargers that could expose consumers to a shock hazard, Finnish mobile giant Nokia on Monday announced a recall program through which it is offering a free exchange.

Affected chargers may have been sold with a Nokia device or purchased separately as an accessory.

Nokia is not aware of any incidents or injuries related to the affected chargers, but is offering the free exchange as a precautionary measure, it said. It has set up a Web site to facilitate exchanges on a country-by-country level.

The problem was discovered during a routine quality control process, Nokia said.

Specifically, in the affected chargers, it was determined that a plastic cover could come loose and separate, exposing the charger’s internal components. That, in turn, could pose an electrical shock hazard if the consumer were to touch certain internal components while the charger is plugged into a live socket.

The number of chargers affected may be as high as 14 million, according to media reports. Nokia did not respond by press time to TechNewsWorld’s request for comment.

“In the consumer marketplace there are millions of devices, old and new,” wireless and telecom analyst Jeff Kagan told TechNewsWorld. “Occasionally, there will be a problem with one.”

Nokia has a good reputation, Kagan added. “I am glad they found the problem and are correcting it before customers get hurt and it becomes a problem,” he said.

In fact, the charger recall is not Nokia’s first encounter with such a problem. Back in 2007, the company recalled 46 million batteries because of their potential to overheat.

“We have been following handset manufacturers for the better part of a decade now, and over that time we have seen a continuing low-level hum of these kinds of issues, whether with software, batteries or chargers,” Chris Ambrosio, executive director of wireless at Strategy Analytics, told TechNewsWorld. “It shows that OEMs have challenges just like auto manufacturers and others do.”

The “unsettling thing” about such issues arising in handsets, however, is that “this is a product you hold next to your face, more often than not,” so it “seems to draw more interest than a typical consumer product,” Ambrosio noted.

OEMs have built a big business in accessories following the billion-unit handset market globally, Ambrosio added, and it typically has high margins.

“There has been a big trend in the accessories world where, to maximize margins, it has gone to third-party manufacturers,” he explained. “Nokia has signed on with a contractor who had problem, and now unfortunately Nokia has to bear the brunt of this issue.”

Ultimately, handset makers and operators are “trying to eliminate having to supply you with a charger” by standardizing on mini USB ports instead, Allen Nogee, principal analyst with In-Stat, told TechNewsWorld.

Since no injuries have been reported, the problem is likely a bigger cost issue than anything else, he added, noting that each charger probably costs about $2 or so for Nokia to replace.

The problem with replacement programs, however, “is that even then, probably a lot of people won’t do it, so there will still be a bunch of dangerous chargers out there,” he pointed out. “It’s always better to make them good the first time.”