No Time to Respond to Email? Let Google Do It

Google this week unveiled Smart Reply for Gmail on iOS and Android.

It uses machine intelligence and neural networks to suggest up to three possible responses for incoming email, based on the content of those emails.

The system learns from users’ responses to suggestions to fine-tune its offerings.

It has a repository of 20,000 Smart Replies that will continue to grow with time, Google spokesperson Emma Ogiemwanye told TechNewsWorld.

“It’s difficult to do anything at all communications-related when you’re traveling,” remarked Susan Schreiner, a senior editor/analyst atC4 Trends. “If you can find a quiet corner to do this, it certainly is a way to get a handle on the inbox.” 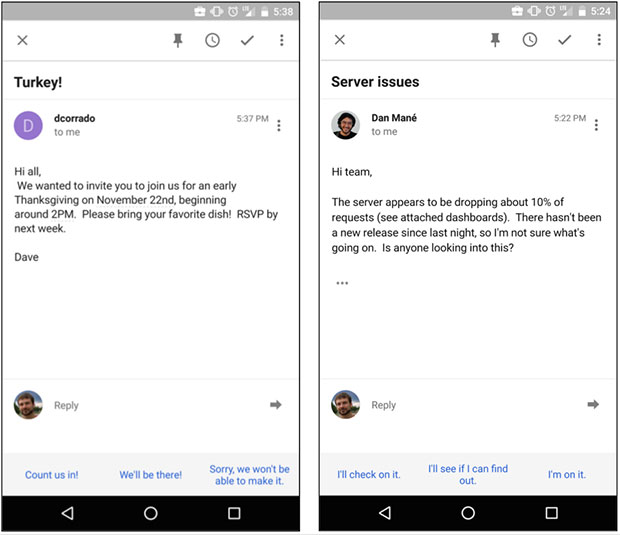 Smart Reply will be available in English in Google Play and Apple’s App Store.

The Smart Reply system is based on a pair of recurrent neural networks, one of which is used to encode incoming email and the other to predict possible responses.

The encoding network examines incoming emails word by word and produces a list of numbers, known as a vector, that captures the gist of what’s being said.

This vector is independent of syntax. For example, it will come up with similar vectors for the questions “Are you free tomorrow?” and “Does tomorrow work for you?”

The second network takes this thought vector — which can be thought of as a meme — and creates a grammatically correct reply one word at a time.

Gmail is using long short-term memory network architecture for the neural networks because it will work even when there are long delays, and it can handle signals with a mix of low- and high-frequency components.

The LSTM architecture homes in on the part of an incoming email that will be most useful in predicting a response.

There will be some mistakes at first as the system may fail to interpret memes correctly all the time, but “people will be forgiving because I think they do understand that, for anything, there’s a learning curve,” C4 Trends’ Schreiner told TechNewsWorld.

“I’m quite bullish on the notion of digital assistants, but so far, no one has actually studied how professionals work,” commented Mike Jude, a program manager at Frost & Sullivan. “If they did, they’d focus as much on telephone answering as they do on emails.”

The ideal assistant “would be able to answer your phone, take a message, and then email the message to you,” he told TechNewsWorld. “Additionally, it would be able to filter your emails into buckets like urgent, routine and garbage” and would be able to take dictation.

Digital assistants “wouldn’t try to answer your emails because emails are evidence, and most people are becoming fairly thoughtful as to what they put into them,” Jude said.

“Most people who get lots of email approach it like this: They consider the source, consider the topic or title, and respond if necessary,” he pointed out. “Actually opening an email to see what kind of response the machine would suggest adds time,” and selecting a response from those offered “forces you to play an unending game of 20 questions.”

The privacy of Smart Reply users is protected because no humans read incoming emails, Google said. The researchers had to get machine learning to work on a data set they could not read.

“Google is in the data-collection business,” C4 Trends’ Schreiner said. Data gleaned by the Smart Reply system on incoming emails, even if it’s just to create more fine-tuned responses in the future that will be stored in Google’s servers, “is just more information for their ad analytics.”