Nikon on Tuesday unveiled four new digital cameras in the Coolpix line, but one of them — the Coolpix S1000pj — generated most of the buzz. This model has a built-in projector that is currently unique in the industry, according to the camera maker. 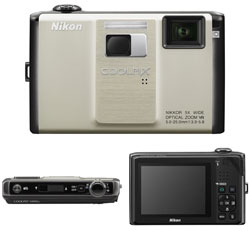 In addition to its built-in projector, the Coolpix has slideshow capabilities.

All four new models use Nikkor lenses and have Nikon’s EXPEED digital image processing capability, along with other advanced features.

They will be on the shelves by September, at prices ranging from just under US$200 to a little over $400.

Like the other new Coolpix cameras, the S1000pj is chock-full of features, but its main talking point is the built-in projector. “The projector’s the real kicker,” Carl Howe, director, anywhere consumer research at the Yankee Group, told TechNewsWorld.

This projects images on any flat surface between 10 inches and 78 inches away. Images projected will range from five inches to 40 inches across. Nikon describes the resolution of projected images as “VGA equivalent” which should put it at 640 by 480 pixels.

The projector has a brightness of up to 10 lumens, according to Nikon. This is a far cry from the 1,000 lumens put out by most home projectors.

Battery life when the projector is in use is about one hour, the company said.

Users need a computer with a CD-ROM drive and built-in USB ports. They can either use a Macintosh running Mac OS X or a Windows PC running Windows Vista Service Pack 1 or Windows XP Service Pack 3.

For all its flash, however, the projector may be little more than a novelty to many users.

“It’s certainly innovative, but you’re taking a 12 megapixel picture and crunching it into barely a quarter megapixel, and putting out an image that’s only 10 lumens,” Howe said.

“In the auto industry, we’d call it a ‘tail fan’: It sounds good, but doesn’t do much for you,” he added.

All four have a new Skin Softening feature, which smoothes and evens out skin tones. Other features include Vibration Reduction Image Stabilization to minimize blurriness and Scene Auto Selector, which automatically adjusts the cameras’ settings to best suit the lighting and other features of the environment when a photo is being taken.

The S70 has a resolution of 12.1 megapixels; sports a 5x wide-angle zoom lens, uses OLED technology, and has a touchscreen control that works like the Palm Pre’s touchscreen, letting users scroll through images by brushing a finger across the screen. It will be available in various colors at $399.

The S640 has a resolution of 12.2 megapixels as well as a startup time of 0.7 seconds, which Nikon says is the fastest in its class. It also features shutter release time lag; movie mode; and various other advanced features. It will be offered in various colors at $249.95.

The Coolpix S570 has a resolution of 12 megapixels; a 5x wide angle zoom lens; and other advanced features. Designed as the entry-level camera in the Coolpix line, it will be available in various colors at $199.95.