In the cloud storage competition for customers, a battle is raging over innovative software-only storage systems and wannabe innovators still hawking yesteryear’s legacy hardware solutions. Dollars and performance are the battlefield stakes.

Nexenta, an open source provider of software-defined storage solutions, is waging the fight with its flagship software-only platform, NexentaStor, to deliver a better performance than its proprietary competitors. 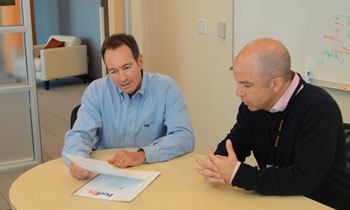 With the battle cry of “Enterprise Class Storage for Everyone,” Nexenta developed a core storage platform around OpenStorage ZFS technology. Its marketing contest to marginalize legacy hardware and eliminate vendor lock-in is making headway, according to CEO Mark Lockareff and Chief Strategy Officer Evan Powell. Their marketing plan uses open source to compete with the big names in legacy storage.

In this interview, LinuxInsider talks to Lockareff and Powell about the issues involved with data storage that give open source solutions a leg up over traditional methods.

LinuxInsider: Cloud storage options are quickly becoming as rampant as Linux distros are. What is it about open source cloud storage that sets it apart?

Big Data is a really big space now. It is bringing about the spiraling death of the appliance. This is not going to happen overnight. Open source is a big factor in bringing this about.

Evan Powell: The traditional storage model is to sell you an appliance. That appliance comes with software that writes your data to a disk in proprietary format. So you normally only have one way to access your data, and that is through your vendor’s technology. Open source, in addition to its innovation in OSes and other computing area, brings an additional element to storage. You can now fire your vendor if you need to. There is no vendor lock-in. That makes perfect sense.

With the challenges of data management with the massive data growth, the last thing you want to do is be locked in to one vendor to get access to your own company’s data. That is one of the main reasons we are seeing open source take over this field.

LI: How do open source platforms make it easier to port your stored data someplace else without having to start all over again?

On the cloud service side you have to promote open standards, but you still have the data gravity issue. Somebody has to move the data. That is an inherent issue. On the technology side companies like us sell only software. There are other OS platforms to play in. You have Linux and BSD open source. There is Illumos and Solaris open source.

All of these use the same disc format, which is ZFS (Z File System). Within that community, which is a pretty big one, are Oracle on the proprietary side as well as some others. You would not really even have to move the data. Or you could move it physically on the disc. You could just point the disc to another management system in under an hour.

LI: In light of these issues, is open source a liability or advantage over proprietary cloud storage options?

I would say that we are seeing constant improvements in the core file system code, and this is a real advantage to open source. With many of the real decision makers in companies there is a religious appeal to using open source and an allegiance to OpenStack. So oftentimes, it makes the selling of this software much easier. There are a lot of companies that really believe in what we are doing, and they also believe in open source.

LI: What is the benefit of software-only storage solutions? Is it not just a new twist on an existing technology?

Software-only storage allows us and our customers to build enterprise class storage solutions without the white box. The customer now has a choice of selecting IBM or Dell or HP or Cisco or SuperMicro or Quanta. We certify different hardware configurations that our software will work on top of. That basically dislodges what EMC did.

You are taking a mostly high margin that they charge for their software, and you swap that out by allowing customers to shop around for their hardware from a variety of vendors. You can put all of your value in the software stack and protect that value over many years. Then, every two or three years, you can do a hardware refresh. This lets you level your hardware costs.

Powell: It is a new twist for legacy vendors who say all their IP is in their software, but then they lock you into proprietary hardware and cash in on the refresh cycle. We actually add additional IP down at the very basic level to be able to handle commodity hardware.

LI: Nexenta’s cloud storage approach seems to be designed for big corporate use. What about mom-and-pop-shop users? Does cloud storage for the small business market make much sense?

We had our beginnings with the mom-and-pop businesses. Back in 2008 we had a heavy dose of free downloads with a lot of customers needing relatively small storage, say up to 16TB. That was our bread and butter for a couple of years. We rode that curve. In fact, that led to our expansion into enterprise customers. Somebody who knew about our product at a previous experience at a small company would influence its adoption at an enterprise level later on. That is how we grew.

LI: What existing open source projects did you use to create your software-based open source software storage solution?

In this case we are leveraging ZFS, which was developed by Sun Microsystems and was open sourced by 2004 or 2005 as per their efforts to open source Solaris. The core system itself is open sourced. Our team, the founders, had written the ISCSI stack for Linux in the 2001-2002 time frame, so Linux certainly played a big role from a technology standpoint in our development of what we call the Nexenta Store for customers. So we always say we stand on the shoulders of giants. Plus, we use ZFS, so that is open source there. Of course, from an OS standpoint there is Linux.

LI: What storage concerns do today’s cloud storage users face, and how can they remove them?

Security is always a concern. Having said that, though, when you look at security, it is actually safer to have your data in the clouds. With open source you can actually look at the code to see if there any exploits. You can not really do that easily with legacy software. That is one reason why when you focus on national security both here and oversees, there is a lot of open source.

The other factor is what are you paying for your data. It is relatively cheap to get your data into the cloud. But what is it costing you every time you access it? That is the problem with Amazon. Then every time you access it — which is the case with Amazon — you get charged for it. Once you have say 100TB up there, getting it out is also expensive because they charge you for that. So you really want to do a back-of-the-envelope calculation on what it is going to cost you.

LI: What are the most important factors businesses must consider in deciding to use cloud storage rather than on-site bulk storage hardware?

Performance, basically. If you put your data up in the clouds, data likes to sit next to the application to get performance. If your apps are ready to go to the cloud, put your storage there. If they are not, you probably would want to use cloud storage as an archive or back up where it is not so performance-sensitive.

Will FAA Rules Be a Drag on Drone Deliveries?