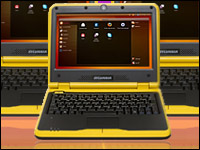 Well, the Fourth of July has come and gone for another year here in the stars-and-stripes section of the Linux blogosphere, where persistent scorching temperatures are beginning to make certain reporters despair.

Rather than raging at the heavens, however, Linux Girl is using the current infernal weather as an excuse to spend more time with her favorite barstool down at the Broken Windows Lounge, whose frosty air conditioning is just one of many temptations on offer.

More time on the barstool, of course, tends to equate to more gossip overheard, and that’s just what happened for Linux Girl over the weekend. The topic that caught her attention this time? The death — or not — of the trusty netbook.

A Murder Is Announced

“The netbook has been murdered,” read the article on ITworld that got tongues wagging. “The concept of an inexpensive computing device with high value for the third world has been sufficiently co-opted so as to make the category meaningless.

“Some called netbooks a sub-category of ‘ultra-light’ or ‘sub-notebooks,’ but netbooks became legitimized by the announcement of the (US)$100 OLPC laptop,” the article went on.

It wasn’t long before the news spread to Slashdot, where bloggers — as per their wont — expressed a healthy amount of skepticism.

‘Just as Popular as Tablets’

“Shops near me have five or six netbooks on sale,” protested MichaelSmith, for example.

Similarly: “Every time I go to a shop at least 1/3 of the portable computers sold are netbooks,” agreed readthemall. “Unlike smartphones, netbooks are real computers that can be actively used for many hours, both for creating and consuming content.”

And again: “Exactly, and I still love my linux book,” concurred masterwit.

Adding further support to such bloggers’ views, in fact, was a separate article on Liliputing summarizing the results of a survey that found that netbooks are, in fact, “just as popular as tablets.”

Down at the Broken Windows Lounge, Linux Girl took it upon herself to take a small poll of her own: Is the netbook really dead?

“Who makes up this insanity?” asked Slashdot blogger hairyfeet over an iced Tequila Tux cocktail. “It is like saying, ‘motorcycles are gonna kill delivery vans’ while ignoring that they are two different vehicles for two completely different roles!”

A netbooks is “a ‘baby laptop,’ and as such is good for most jobs a laptop is good for,” hairyfeet explained. “You can not only do the web, you can do basic office work, keep your music on them, even do some light coding if you are so inclined.”

A tablet, by contrast, “does one job and one job only: consume content,” he asserted. “It is two different devices for two different jobs.”

Sales of netbooks have only been down, in fact, because “people have realized that Intel Atom chips are trash,” hairyfeet opined. “Now that the new AMD APUs are coming out, I think you’ll see sales pick up by the end of the year once the chips get into most mainstream stores.”

‘Too Good an Idea to Die’

In fact, “the netbook is too good an idea to die,” Pogson opined. It “is not shipping in its top numbers only because it is getting 1/N share of the small-cheap-computer market. There is room for everyone, and ASUS and others are still producing netbooks with various OS and features.”

Ultimately, “the really neat thing about netbooks and other small cheap computers is that prices can still be reduced $100 or so, squeezing out that other OS completely,” Pogson pointed out.

“OEMs can sell netbooks profitably at much lower prices thanks to ARM CPUs and Moore’s Law,” he added. “The average selling price of that other OS will have to be cut seriously to compete at these prices.”

The problem with netbooks “is that the component makers didn’t like the price point and turned them into mini-laptops and raised the prices to match,” consultant and Slashdot blogger Gerhard Mack suggested.

“Thankfully, it’s not all dead, and we have Chinese manufacturers such as Lemote that still make netbooks cheap enough that they are worth buying,” he added.

Barbara Hudson, a blogger on Slashdot who goes by “Tom” on the site, wasn’t so sure.

A few years ago, “all of a sudden it was possible to create a ‘good enough, small enough, cheap enough’ computer, and the netbook was born,” Hudson explained.

A few years later, however, “again thanks to Moore’s Law, regular laptops with more features, better displays, and without the ‘kiddie-sized’ keyboards could be made for almost the same price, and other devices such as tablets no longer had to pay a huge premium for ultra-miniaturized parts with crappy performance,” she noted. Then, “the netbook market went into a nosedive.”

All in all, “the demise of the cheap netbook is just history repeating itself,” Hudson suggested. “The original ‘portable’ computers — which were really better known as ‘luggable’ (think ‘the Herniator’) because they weighed so much — were made possible by Moore’s Law, then killed a few years later by that same Moore’s Law making real portable computers possible.”

“The dream of netbooks for third world development is, I am afraid, a bit of a pipe dream,” Travers told Linux Girl. “In general, people who can afford good internet access can afford good computers. Everyone else can use an internet cafe occasionally, if they can afford that; if they can’t, they can’t afford a netbook, either.”

The larger issues for third world development “are license fees, assembly costs, etc.,” Travers pointed out. “More mileage would be gained in this area by building the laptops in these countries and using free/open source software. Open hardware would help too.”

Netbooks are “still here in other forms, though,” he concluded. “They still have positive impacts in the area of consumer choice. But they aren’t going to make computing ubiquitous the way, for example, Brazil’s system of internet community centers might.”