The creators ofNirvana Editor, or NEdit for short, consider it paradise for writers. I found, however, that it’s not yet the perfect text editor.

NEdit is currently in version 5.5, so it is not a newcomer to the text editing scene. I tried it with the hope that it would bring a few new tricks to my aging collection of text editors. I spend almost as much time each day in text editors as I do in web browsers. I write words rather than programming code. 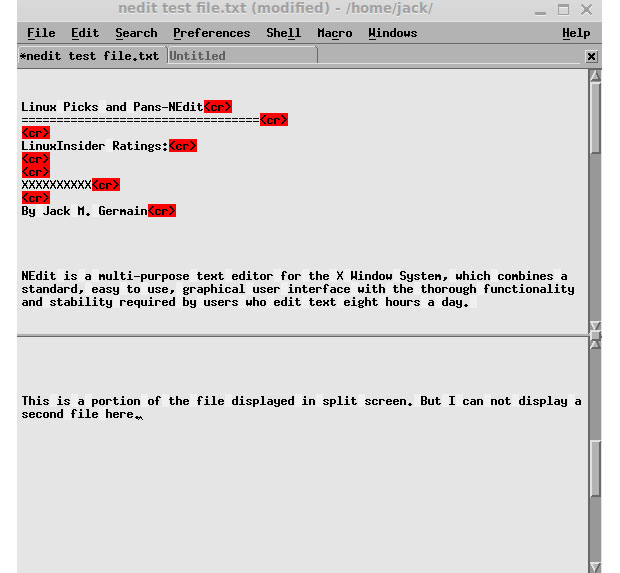 But wordsmithing skills require many of the same text editor functions as code writing needs. Much of the work flow for creating and editing words or binary code have the same tool sets. Compared to the features and usability experience in other popular text editors, NEditor left me wanting more.

The term “text editor” is a deceiving label for an app category. It implies that the primary purpose of the application is to modify text in a file.

Truth be told, however, a really good text editor’s primary purpose is to both create and edit text files. For me, NEdit fails to deliver satisfaction beyond the most undemanding writing and editing functions.

NEdit is a multi-purpose text editor for the X Window System based on the Motif programming language. Its design combines a standard, easy to use, graphical user interface (GUI) and a range of functionality required for editing text.

NEdit has a similar GUI in each of its versions for Macintosh, Microsoft Windows and Linux platforms. It is customizable, but doing so requires using a series of sub-menus and editing configuration files that are not intuitive.

NEdit’s features for code writers include syntax highlighting, macro language and streamlined keyboard navigation. Word writers, on the other hand, will find setting up macros and key binding modifications a bit more challenging than in other leading text editing apps.

The nearly plain vanilla menu layout with no icons or tool bar lulls you into thinking NEdit is a basic, simple text tool. Not so!

The Help menu, which is separated from the rest, sits at the far right edge of the menu row. It provides a gateway to a complete set of documentation guides. The topic list reads like an index to a traditional user’s guide.

Powerful features are hidden away in the menus, waiting to be discovered. Learning to use them takes some effort, however. For example, spell checking is expected in all but the most basic text editors like Leafpad. NEdit has this feature — sort of — if you can handle shell commands to external programs.

NEdit has a pre-configured shell command call to ispell that modifies the document. Other shell commands let you set up calls to additional external macros to modify documents seamlessly. For everything to work, you must first install the required external programs and point the preferences settings to them.

The macro menu is another example of the steep learning curve required. It has a simple side and a complex edge. For example, it is fairly easy to set up simple keystroke recording. But NEdit’s powerful built-in scripting language is geared towards programmers familiar with Awk/C/Perl/PHP.

NEdit’s advanced functionality is heavenly for programmers. It can easily leave other users close to clueless and without those functions. By comparison, the Geany Text Editor has similar high-end features built in that only require a simple menu selection.

Even setting up the Preferences Pane can be a challenge. You have to click an arrow on the right edge of the pane or its label in the menu to see the options, and then select the one you want. After clicking on your setting choice, the entire Preferences window closes.

This forces you to go through the complete menu-opening process again. In some cases, you have to hold the left mouse button down in order to move around a cascaded submenu to prevent the entire preferences window from closing.

The help menu opens a portal to details on how to customize beyond the more limited options in the Preference panel. If you go to the Advanced Options in the Default Settings sub-menu, remember to save the changes if you want to preserve them for your next session.

Further tweaking lets you alter user defined commands for the shell, macro and window background menus. You must go to each Customize Menu option for each one in the Default Settings sub menu of the Preferences panel to access the dialogs for creating new items.

You can also customize other aspects of NEdit’s functionality by modifying its X window resources. In essence, you can modify much of the text editor’s look and how its key bindings function.

For example, you can alter the color of each individual button, font styles and characteristics. But doing routine changes to default settings often requires delving into multiple sub-menus and browsing layers of options from system files. This finessing is much more involved than the more simplified approach other text editors use.

I found the file saving function a disaster. NEdit defaults to the user’s home directory. From there you pick a folder from the filtered list in the savings dialog window and enter a file name.

But loading or saving a file to or from an external location, such as a thumb drive, is next to impossible. I could not find a way to access other mounted volumes or directories besides the /Home directory.

The split pane function posed a disappointment as well. NEdit’s split pane feature opens an equally-sized second window under the originally opened text file. It is simple to scroll to two different spots of the opened file, one view in each split window. But you can not have two different files opened n the same split view.

You can, however, have multiple tabs opened. This lets you move among several different files by clicking a tab. Each tab can have its own split view.

If your text editing needs are geared towards wordsmithing rather than code writing, NEdit might not be your best choice. It lacks some expected features such as word count. Programmers, on the other hand, may find this text editor more to their liking.

Please send your ideas to me at jack.germain@newsroom.ectnews.com, and I’ll consider them for a future Linux Picks and Pans column.