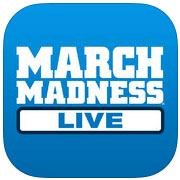 NCAA March Madness Live by NCAA Digital is an iOS app available in the iTunes App Store for free. 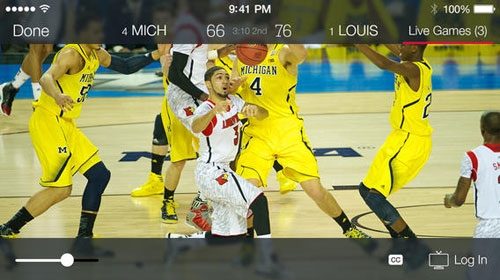 I’ve known some diehard college basketball fans to take vacation days just to watch the popular NCAA Division I Men’s Basketball Tournament, but lesser fans can sneak away to catch the action withoutcamping on the living room couch: NCAA Digital has updated its NCAA March Madness Live iOS app for 2014. With it, you can live-stream 67 games as they are broadcast from CBS, TBS, TNT and truTV.

The app is free — and despite some streaming limitations for non-cable and satellite television subscribers, it’s a must-have app for any basketball fan.

The core tournament starts Thursday, and the app provides the schedulefor each day’s games, showing you which broadcaster is behind the livestream for each game. The broadcast provider is important. Why?

If you’re a cable or satellite TV subscriber who gets TBS, TNT andtruTV, you should be able to log into the app with your subscribercredentials. This will let you live-stream the games from your iOSdevice without any limitation.

If you’re not a subscriber to these pay-to-view channels viaold-school television methods, you still can watch all the games thatare broadcasted by CBS live and completely free.

What about the other games, though? What if TNT is broadcasting your favorite team’s game? There’s a tiny sliver of good news here, too, and it’s three hours long: The app keeps track of a temporarypreview period — not counting CBS broadcasted games. During thisperiod, which is three hours, you can stream any of the pay-TV broadcasts.

To get the most out of your three hours, you might want to wait untilthe second half of critical must-see games rather than blow most ofyour window on just a single full game.

Retooled for iOS 7, the app is a smoothly designedwonder, giving fans easy access to scores and stats. This means youcan follow the action without actually watching the games — great forthose fans who aren’t willing to burn vacation days comeThursday and Friday.

The tournament bracket is a joy to use, too, letting you pinch andzoom to check out matchups. If you like to make your ownpicks, the app’s Capital One NCAA March Madness Bracket Challenge letsyou do that, too — nice because it’s the “official” bracket game ofNCAA March Madness.

There’s so much more, though. The app is a news machine forthe tournament, reporting the action via key video highlights, photos,and tweets. It also provides as-they-happen alerts for upsets,overtimes, close games, and activity around your favorite teams.

I haven’t personally tried the radio feature in previous versions, butthe app will let you listen to the live radio broadcast for everygame, too.

Last year, I streamed games while traveling in a vehicle. When Iarrived at my destination, the app was able to handle the video streamhandoff from cellular data to WiFi. So the app works surprisinglywell.

The only real disappointment with the app is the NCAA’sassociation with TBS, TNT and truTV. No doubt, those channels –through parent company Turner Broadcasting, which is a subsidiary ofTime Warner — have locked up television broadcast rights by paying alot of money. Perhaps they’ve paid more than the NCAA could make by selling one-offpurchases to individuals via apps or by selling advertising.

This is only a problem for fans who have no intention of shellingout every month to pay for pay-TV channels and content they rarely, ifever, want to watch. I doubt the issue will be resolved in 2015, butif fans are lucky, maybe the NCAA will understand the new reality oftoday’s viewers and manage to increase the preview window just a bit– a baby step forward. Say to six hours. How about that, NCAA?Please?