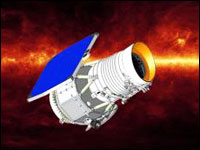 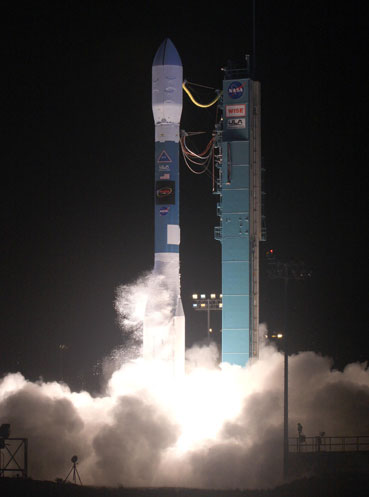 Early Monday morning, NASA launched a spacecraft that will map the entire sky in infrared light with more sensitivity and resolution than has ever been possible before.

A Delta II rocket carrying NASA’s new Wide-field Infrared Survey Explorer, or WISE, launched from Vandenberg Air Force Base in California at 6:09 a.m. PST Monday and deposited the instrument into a polar orbit 326 miles above Earth.

The space telescope is on a nine-month mission to record the infrared colors of the whole sky in more detail than was provided by the last infrared sky survey, which was performed 26 years ago. It will first scan the whole sky, and then it will scan one-half of the sky a second time before its mission ends.

“WISE thundered overhead, lighting up the pre-dawn skies,” said William Irace, the mission’s project manager at NASA’s Jet Propulsion Laboratory in Pasadena, Calif. “All systems are looking good, and we are on our way to seeing the entire infrared sky better than ever before.”

Almost everything in the universe glows with infrared light, allowing WISE to catalog millions of images of a variety of astronomical objects, such as near-Earth asteroids, newborn stars, planet-forming disks and distant galaxies.

The mission is expected to uncover objects never seen before, including cool stars known as “brown dwarfs,” the universe’s most luminous galaxies, and some of the darkest near-Earth asteroids and comets.

By measuring the infrared light emitted by asteroids and comets, for example, astronomers will get the first good estimate of the size distribution of the asteroid population. That, in turn, will indicate approximately how often Earth can expect an encounter with a potentially hazardous asteroid.

Hundreds of millions of objects will ultimately be included in the WISE atlas, NASA said, providing astronomers and other space missions with a longlasting infrared road map that will help answer fundamental questions about the origins of planets, stars and galaxies.

‘A Large Section of the Sky’

“This will help us learn a lot about the heavens out there that we haven’t seen before,” Paul Czysz, professor emeritus of aerospace engineering at St. Louis University, told TechNewsWorld.

It’s not just WISE’s use of infrared that will distinguish the insights it can provide, but also its wide field, Czysz noted.

“It’s not like the Hubble, where you can look at a precise star,” he explained. Rather, “this can integrate a very large area, so you get to see a large section of the sky.”

The WISE spacecraft is about the height and weight of a big polar bear, only wider. Its sensitivity, however, is hundreds of times greater than that of its predecessor — the Infrared Astronomical Satellite — which operated in 1983.

Its sensitive infrared telescope and detectors are kept chilled inside a Thermos-like tank of solid hydrogen, called a “cryostat.” This prevents WISE from picking up the heat, or infrared, signature of its own instrument.

The solid hydrogen is expected to last about 10 months and will keep the WISE telescope a frigid minus-429 degrees Fahrenheit.

WISE’s science instrument was built by Space Dynamics Laboratory, while the spacecraft was built by Ball Aerospace & Technologies.

On its current mission, the craft will circle Earth via the poles about 15 times a day. A scan mirror within the WISE instrument, meanwhile, will stabilize the line of sight so that snapshots can be taken every 11 seconds over the entire sky.

After a one-month checkout period, the infrared surveyor will spend six months mapping the whole sky. It will then begin a second scan to uncover even more objects and to look for any changes in the sky that might have occurred since the first survey.

“It’s hard to tell what we might find,” Czysz said.

Indeed, “this is very exciting,” Neville Woolf, a professor of astronomy at the University of Arizona, told TechNewsWorld.

WISE “has a much higher sensitivity than we’ve had before,” Woolf added. “What you expect is the unexpected.”