The United States’ Voyager 1 spacecraft is close to becoming the first human-made object to travel between the stars.

The spacecraft, which is now more than 11 billion miles from the sun, has entered the so-called “magnetic highway,” showing scientists two of the three signs they believe will confirm it has entered interstellar space: the presence of charged particles from the sun shooting out into space; and cosmic rays from outside coming into the heliosphere, which can be thought of as the region of space dominated by the sun. 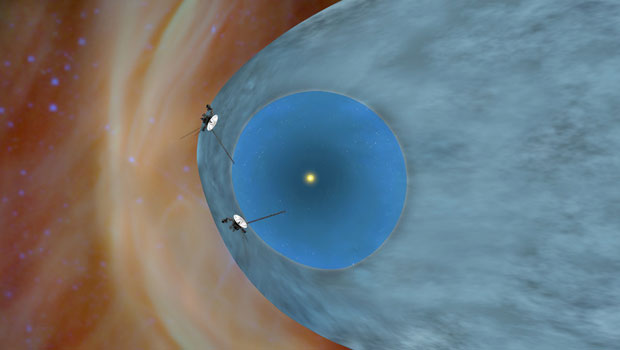 This artist’s concept shows NASA’s two Voyager spacecraft exploring a turbulent region of space known as the “heliosheath,” the outer shell of the bubble of charged particles around our sun. (Credit: NASA/JPL-Caltech)

The third sign, an abrupt change in the direction of the magnetic field, would indicate the presence of the interstellar magnetic field. That has not yet been detected.

“We have speculated for many, many years on the nature of the interplanetary medium,” William I. Newman, a professor of earth space sciences at the University of California at Los Angeles, told TechNewsWorld.

Crossing the boundary dividing the heliosphere from interstellar space is not like breaking through the skin of a bubble.

“It’s not a barrier or sharp boundary — it’s just like leaving Earth’s atmosphere,” Newman explained. “There is a point where there is a balance between the magnetic forces associated with the sun and the interstellar medium.”

This point, or boundary, is called the heliopause.

What Voyager 1’s Up To

Voyager 1 and its twin, Voyager 2, are on a mission to measure the size of the heliosphere, among other things.

Scientists aren’t quite sure how far Voyager 1 has to go to reach interstellar space. They think it could take up to several years to get there.

The heliosphere, which extends at least 8 billion miles beyond all the planets in our solar system, is dominated by the sun’s magnetic field and what’s commonly called the “solar wind,” Carol Paty, an assistant professor at the Georgia Institute of Technology’sSchool of Earth and Atmospheric Sciences, told TechNewsWorld.

Interstellar space is filled with matter from other stars and the magnetic field present in the nearby region of the Milky Way.

“As we move forward trying to figure out a context for our existence — trying to understand how the sun, our solar system and our galaxy formed, and how these fit into the intergalactic patchwork that is our universe — finding boundaries and understanding the physical reason for those boundaries is extremely important,” Paty said.

“Until Voyager’s last decade, and the recent observations of IBEX and Cassini, we only had a rough theoretical notion as to what happened at the end of our solar system,” Paty continued. “We are now starting to have enough pieces of information to solidify and validate these theories and better understand our place in the galaxy.”

Understanding the magnetic highway, which is also called the “depletion region,” requires a little background involving the solar wind and the interstellar medium.

The point where the solar wind begins to slow down is called the “termination shock.” After that, the area the wind passes through is called the “heliosheath.”

“This means that the plasma from the heliosphere can escape, leaving very few particles sourced from the sun in that region — hence the term ‘depletion,'” Paty explained. The direct connection also lets galactic cosmic rays from interstellar space come into the heliosphere. The bidirectional flow of solar particles led to the area being called the “magnetic highway.”

Knowledge May Not Be Power

Voyager 1 will “continue to tell us more about this interesting region of space,” Paty said. “How variable is it? Does it change rapidly or transition slowly? Is there a sharp edge to the heliosphere?”

Given the current economic situation, which has led to Washington’s clamping down on the U.S. space program, that information may end up metaphorically collecting dust in a data warehouse.

“We are seeing the dawn of a new era,” UCLA’s Newman said.

“There are discoveries yet to be made, and what we will do with them remains a challenge,” he observed. “We’re living in an era where America’s space effort has essentially wound down, and if we don’t return to space in the near term and have a relatively cost-effective way of doing that, we may never return.”