Good things come in small packages, as the saying goes, and nowhere is that more true than in nanotechnology.

Research in the field has recently led to several new strategies for employing nanotechnology in the fight against cancer, and — so far, at least — the results are promising.

One of the hardest parts of fighting cancer is that drugs often hit healthy cells at least as hard as the cancerous ones, causing patients to get sick. However, researchers at the Georgia Institute of Technology and the Ovarian Cancer Institute are using nanotechnology to sneak cancer-fighting particles into just the cancer cells, leaving the healthy ones alone. 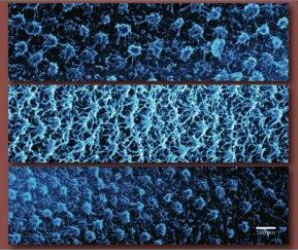 Their method uses hydrogels — tiny particles less than 100 nanometers in size — to insert a particular type of small interfering RNA(siRNA) into cancer cells. Once in the cell, the siRNA triggers the programmed cell death the body uses to kill mutated cells and helps traditional chemotherapy do its job.

“It’s like a Trojan horse,” explained L. Andrew Lyon, professor in the School of Chemistry and Biochemistry at Georgia Tech. “We’ve decorated the surface of these hydrogels with a ligand that tricks the cancer cell into taking it up. Once inside, the particles have a slow release profile that leaks out the siRNA over a timescale of days, allowing it to have a therapeutic effect.”

A research paper describing the approach was published last month in BMC Cancer.

Helping Chemotherapy Do Its Job

Many cancers are characterized by an overabundance of epidermal growth factor receptors, or EGFR, and a reduction in apoptosis, or programmed cell death.

Traditional chemotherapy agents often work by damaging cells to induce apoptosis, but the overabundance of EGFR makes many cancer cells resistant to such approaches, explained John McDonald, professor in Georgia Tech’s School of Biology and chief research scientist at the Ovarian Cancer Institute.

Small interfering RNA is good at shutting down EGFR production, but once inside the cell it has a limited life span. The hydrogel nanoparticles release only a small amount of siRNA at a time, ensuring that while some are out in the cancer cell doing their job, reinforcements are held safely inside the nanoparticle until it’s their turn.

“We have shown that we can target siRNA against EGFR specifically to ovarian cancer cells resulting in knock-down of EGFR expression and thereby making the cancer cells extremely sensitive to traditional chemotherapy treatments like taxanes,” McDonald told TechNewsWorld.

In other words, when the researchers’ hydrogel “nanosponges” are used to deliver RNA that interferes with the cell’s ability to produce certain proteins, “the cell becomes much more susceptible to traditional chemotherapeutic drugs,” Lyon told TechNewsWorld. “In this way, we hope to increase the effectiveness of cancer treatments, perhaps even solving problems associated with drug-resistant cancers.”

Without nanotechnology, it is very difficult to get RNA into a cell in an active and functional form, Lyon pointed out.

“The nanosized hydrogels offer the ability to package, protect, and precisely deliver a very delicate cargo such as RNA,” he explained. “Additionally, the [approximately] 100 nm size of these nanogels is likely to permit good blood circulation and tumor localization.”

The researchers’ tests have already been shown to work in vitro, so tests in vivo are scheduled to begin soon.

Researchers at Georgia Tech, including McDonald, have been using nanotechnology to attack cancer in another context as well.

In this case, it’s magnetic nanoparticles they’re using, and their approach targets the free-floating cancer cells that can cause ovarian cancer metastases.

“Most metastasis of ovarian cancer occurs by cancer cells falling off the primary tumor and spreading to the liver and other internal organs,” McDonald explained. “We hope that our magnetic nanoparticle system may be able to significantly reduce ovarian cancer metastasis.”

That report was published in December in Nanomedicine.

‘The Brink of a New Era’

In general, such nanotech-based medicines are therapeutic because they can effectively exploit the unique mechanical properties of cancer lesions and treat the various forms of the disease locally, according to Mauro Ferrari, professor and chairman of the department of nanomedicine and biomedical engineering at the University of Texas Health Science Center at Houston.

“The level of specificity that can be achieved through the use of the conceptual model of cancer as a mechanical disease — and through the power of the mechanical engineering design process — will result in greater therapeutic efficacy with reduced side effects,” he explains in a forthcoming article, titled “Infernal Mechanism,” that will appear in the March 2010 edition of Mechanical Engineering.

In other words, he concluded, “we are on the brink of a new era in cancer treatment.”