Mystery Tablet’s Not the Only Thing on Microsoft’s Slate

Microsoft CEO Steve Ballmer on Wednesday took the stage to deliver a keynote address at the Consumer Electronics Show in Las Vegas. Ballmer showcased products from several partners at the event, including a tablet device made by HP. He also announced a tie-in with HP to promote the Bing search engine. 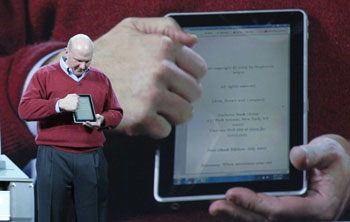 The Microsoft chief forecast a banner year for the Xbox 360 and promised consumers would get its Natal natural user interface this year.

At the CES keynote, Microsoft demonstrated new products and technology from various partners, including HP, Lenovo, Sony, Dell and Asus. Ballmer also showed upcoming “slate PCs” — tablet PCs — that Microsoft’s partners are working on. “We’re talking about something that’s as portable as a phone and as powerful as a PC running Windows 7,” he said before picking up a prototype slate PC from HP.

This prototype PC will be on the market this year, Ballmer revealed. “I’m running Kindle software for the PC on it, it lets me flip through the book using touch, I can experience the book in full color, I can buy and download more content from Amazon within this application,” he said while demonstrating the device’s capabilities.

Rumors about a supposed Microsoft tablet computer have been circulating since September, when the gadget blog Gizmodo published purportedly leaked photos of a book-like digital device dubbed the “Courier.” The devices that made an appearance on stage with Ballmer on Wednesday, however, did not resemble those photos.

Searching for a Pot o’Gold

Microsoft’s deal with HP will make Bing the default search engine and MSN the default home page on the latter’s PCs. This may help boost Microsoft’s push into the Internet search market. “HP is the market leader in PCs, so this deal should be significant,” Rob Enderle, principal analyst at the Enderle Group, told TechNewsWorld.

However, the effect may not last long. “People are creatures of habit, and Google will do everything it can to switch them back,” Enderle pointed out. “Bing is rather good, and Microsoft should get a nice pop from this if people try it out, which is likely.”

Bing more than doubled its U.S. market share in the fourth quarter of 2009 at Google’s expense, according to Actionable Insights. However, this doesn’t mean people will switch from Google to Bing en masse. “Bing’s good, but it’s not that much better than Google to make people switch to it,” Andrew Eisner, director of content at Retrevo, told TechNewsWorld.

Giving the Xbox Some Love

Microsoft is also planning additions to its game lineup for the Xbox 360. These include the next version of “Halo” — “Halo Reach” — which will come exclusively to the Xbox 360 in the fall, said Robbie Bach, president of Microsoft’s entertainment and devices division.

Other games coming to the Xbox 360 include “Mass Effect 2” from Electronic Arts; “Tom Clancy’s Splinter Cell Conviction” from Ubisoft, which will arrive in Spring; “Fable 3”; and “Crackdown 2.”

Microsoft will also explore new fields in gaming this year. “A new genre of games will be introduced — psychological action thrillers,” Bach said. The first of these will be titled “Alan Wake.”

Project Natal for the Xbox 360, which was demonstrated in 2009, will be coming to consumers later this year, Bach announced. The device allows players to control a game through body movements without the use of handheld controllers. “We’ve made tremendous progress on Project Natal, and this holiday season, you’ll be able to bring it home,” he said.

“With Project Natal, we’ll remove the last barrier to gaming — the controller,” Bach said. “2010 is going to be the biggest year in Xbox 360 history.”

While Project Natal’s technology is interesting, it may not translate into increased sales, Retrevo’s Eisner cautioned. “Whether or not it helps sell Xboxes will depend on the game,” he explained. “Our research shows that people are not buying a huge number of gesture games like those for the Wii.”

Ballmer also touched on other Microsoft technologies. These included Windows 7, mobile phones, the convergence of television and PCs, and efforts in the auto industry.

Microsoft’s moves in the auto industry highlight a new trend — the always-connected consumer who can get information anywhere at any time. “Technology’s rapidly transforming the in-car experience,” Ballmer said.

For example, Ford will roll out the next generation of the Sync in-car communications and entertainment service it developed jointly with Microsoft. This will incorporate an in-car WiFi system. Meanwhile, Kia Motors announced its UVO system, also powered by Microsoft, on Tuesday. This will be activated by voice or touch.

In this area, Microsoft is well ahead of Apple, Enderle said. “Apple, with its iPod interface, is nowhere near as advanced, but it is plug and play with the iPod,” he pointed out. “Sync will work with an iPod and other devices, but the iPod interface will only work with iPods.”

The auto market for in-car communications and entertainment systems is fairly crowded, and manufacturers, including Mercedes-Benz, GM and Toyota, have been offering such systems for some time. Microsoft’s increased presence in this field could take this to another level, toward always-on, everywhere connectivity because it also offers mobile phones, the Zune MP3 player and PC software.

“It’s an inevitable step towards ‘anywhere’ — when connectivity unites all of us and the things we care about,” Yankee Group President and CEO Emily Nagle Green told TechNewsWorld. “We’re headed towards a seamless online existence where communication, search, entertainment, transactions — any digital activity — will follow us without interruption from one ambient connected device and environment to the next.”

Microsoft, Ballmer also said, will continue to expand the Zune music and video service to other platforms.