Mounting a Tablet in Your Vehicle’s Front Seat 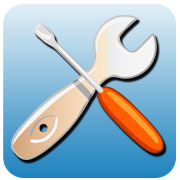 Factory-supplied satellite navigation and entertainment systems can add thousands to the cost of a new vehicle. Plus, the speed at which consumer electronics come to market is significantly faster than a car’s development cycle, so your in-vehicle equipment is outdated before the car leaves the new car lot.

Even an aftermarket OEM kit is in the thousands. Consumer advocate Which? reckons that hardly any used car buyers will pay extra for this expensive kit when they can pick up a basic handheld sat-nav unit for a few hundred dollars.

Why are we ordering vehicles with this stuff?

I decided to explore upgrade options for my gracefully aging Dodge Ram pickup, and along with most of America, quickly settled on keeping the truck. I planned to service the four-wheel-drive and upgrade the navigation and entertainment. 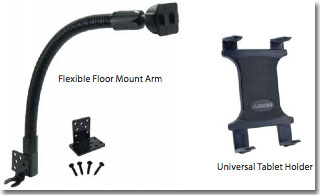 I settled on a longish, Chinese/Taiwanese-manufactured, 18-inch gooseneck tablet floor mount made by Arkon, sold by ChargerCity and fulfilled by Amazon with free shipping. Cost of the navigation and entertainment upgrade: US$33.99.

This bendy, steel mounting pedestal would accept my heavy, existing 10-inch Toshiba Android tablet neatly. It also came with a free, un-needed USB cable. Internet functionality could optionally be provided by a tether to my Android smartphone, and the 3.5mm headphone jack could provide connectivity to the existing cassette player.

Check laws in your state. California is particularly tough on distracted driving and even has an originally federally funded California Highway Patrol crackdown on it that expires in Sept. 2012. Generally, you can’t text or make handheld calls. You also can’t block the windshield.

The State of California cites reading as a primary action that causes distracted driving, and California recommends you get your passenger to operate any satellite navigation.

Undo the passenger seat track bolt with a socket wrench. It’s under the seat and above the seat track. Then slide the included fork bracket over the seat bolt. This will form the foundation for the gooseneck.

If the seat bolt points upward, use the fork bracket as it comes from the manufacturer. If the bolt points forward and toward the front foot well, you will need to separate the fork from the already attached plate with a Philips screwdriver and realign the fork so that the plate provides a vertical mount for the gooseneck.

Screw the gooseneck into the orifice in the plate and tighten. Note that the gooseneck must attach vertically. A sideways attachment will cause the tablet to swivel excessively in use.

Bend the gooseneck so that the mounting head end points toward your seating position. Look for airbag locations, which often have embossed designations on the dash, and keep the kit from obstruction airbag deployment.

Attach the supplied tablet holder by sliding the tabs on the tablet holder onto the mounting head on the gooseneck. Unintuitively, the two tablet-holding legs that are closer together on the holder should be positioned so they are located at the bottom. This allows the top two legs, which are farther apart, to be raised for inserting the tablet.

Tether the tablet to your phone using the tools provided by the phone carrier. On carriers, including Sprint, this involves purchasing an add-on and making settings changes within the phone. There are other methods of tethering that involve rooting the phone and may have implications relating to your phone carrier agreement, which you should check if you go that route.

Launch the Android Market on your tablet and look for a car interface by searching for “Car Mode.” These phone-designed interface apps allow you to customize shortcuts for vehicle-oriented apps like free Google Navigation.

I’ve been using Car Home Ultra, which shows a compass, provides big app-launch buttons and has day and night lighting schemes. The app’s native resolution renders acceptably on the tablet. Car Dashboard appeared pixilated and others I tried were too fussy.