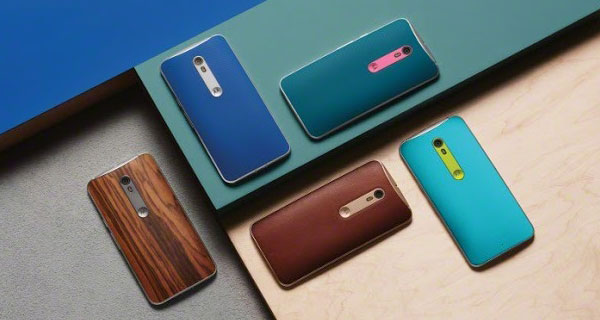 People have been living with phones that nag during drives, make outbursts during meetings, and run out of juice just when they’re most needed, the company said. Adding insult to injury, they are often mismatched with their owners’ style and character.

Motorola promised its newly introduced suitors will change all that.

The Moto X Style (pictured above) isn’t exactly a cheap date, but at US$399 without a contract and compatible with all major wireless carriers in the U.S., it’s well positioned to compete in the middle and high-end markets.

The 5.7-inch QuadHD Moto X Style has a 21-MP rear-facing camera partnered with a 5-MP selfie camera. It’s kitted out with specs of flagship caliber, including a 1.8-GHz hexa-core Snapdragon processor. It can deliver 10 hours of service on a 15-minute charge, making it the world’s fastest-charging smartphone, according to Motorola.

Flanking the flagship, the Moto X Play, a gunship of sorts, has a smaller 5.5-inch display. It doesn’t have quite the Style’s might, but it does have a 3600 mAh battery, which allows two days away from a charger, the company said.

The work-ready refresh of the Moto G sails right through the center of the mid-range market for smartphones, offering a 5-inch display that has an IPX7 water-resistant rating that means it can survive a fall overboard into the drink. The $180 Moto G has a 13-MP rear shooter that captures 720p video, and it sports an all-day battery.

A Sea of Voices

While the highlights and talking points are there in Motorola’s refreshed lineup, the company is still fighting to be heard above the sea of voices in the increasingly crowded Android market.

This latest refresh may be more about establishing harmonies than standing out.

“One of the concerns about the Android OS is the disconnect between the OS and the hardware manufacturers,” noted Michael B. Spring, associate professor of information science and technology at the University of Pittsburgh.

“The recent Stagefright vulnerability was recognized and patched by Google, but it is not clear when manufacturers will push it out,” he told TechNewsWorld.

Motorola may be taking the appropriate steps to make Android devices more appealing to customers shopping in every tier, but to compete at the high and low ends, the hour might be too late.

“In the premium segment, Android customers are switching to become Apple iPhone customers,” he told TechNewsWorld. “At the low end, Xiaomi, Micromax and others are taking the marketshare away.”

Google has encouraged its Android community to “be together, not the same.”

Still, with the market demanding a unified experience across all mobile devices, Android may have to become more like iOS to stay in the game, according to Chowdhry.

“I wouldn’t say there will be a consolidation in the space, as in someone buying someone else. I don’t think that will happen,” he said, “but I think there will be a weeding-out process, and only the low end of the Android market will be attractive.”

On the other hand, the strength of the Motorola brand should not be discounted, according to Spring.

“Smartphone purchases are almost religious,” he said. “Apple and Samsung have devoted followers, but so do LG and Motorola. The only one who appears to be destined to lose is Microsoft.”