Earlier this month, Microsoft applied for a patent related to a technology that would highlight areas of high crime and route people around them. Folks seemed to get upset because areas like this tend to struggling due to a lack of revenue, and this would route people who might otherwise shop there to other safer and likely more lucrative areas.

While true, I think it comes down to choice. Would you like to have the choice of whether to take a risk, or would you like someone else to make this choice for you, for the good of the folks selling products in those areas? Clearly, if I’m a seller, I’d prefer the latter path — but as a buyer, I think that being able to make informed decisions is more important.

In this example, I’m both pro-choice and pro-life, in that the lives I’m protecting are my own and those of the folks I care about. I’ll go into this further.

I’ll end with my product of the week: the amazing ASUS Eee Pad Transformer Prime.

In a World of Information, Do You Want to Know?

That is the big question, and the idea of confirmation bias suggests that we really don’t. I’m reminded of that scene from the first “Matrix” movie where Neo, the hero, is given a choice: the red pill and knowledge of the way things are; or the blue pill and a return to safe ignorance. The religious parallels with the Garden of Eden and the tree of knowledge, where eating the apple that destroyed ignorance was a bad thing, are hard to avoid.

Later in the series, Neo and his friends are betrayed by a traitor to their cause who has been offered the blue pill as a reward. In a way, confirmation bias argues we all would prefer this blue pill. In other words, when given a choice between happy ignorance and unhappy truth, we will leap for ignorance.

This goes to the core of the Microsoft patent. The patent application describes a technology that would allow a pedestrian — and clearly it would work with a driver as well — to avoid areas of high crime. This would lower the probability of getting mugged, killed or carjacked, but being statistics based, wouldn’t ensure against it. Unlike physical hazards like rocks or shoals in the ocean, criminals can move, and it might take months or years to determine that an area that was safe has become unsafe or vice versa.

However, sensors increasingly are capturing information in real time, and traffic avoidance technology is currently based largely on the real-time capture of traffic information. At a future point, the real-time capture of crime statistics could make these devices equally dynamic. Also, the ocean and fish in it don’t get a vote. In other words, if a ship wants to steer a particular course, there won’t be a write-in campaign by the fish that it bypasses. There lies Microsoft’s problem.

Needs of the Many

A blighted area needs funding to pay for police and to eliminate the blight. If people are routed around the area, the problems are likely to increase — and clearly, folks who don’t have access to GPS technology would have a higher likelihood of being hurt or killed. From the perspective of the shop owners and folks who can’t afford a GPS system, this technology would seem unfair.

This is the needs of the many over the needs of the few argument. It can be applied to a lot of things. For instance, the tobacco industry pays a ton of taxes helping out the nation, and a relatively small percentage of people die of lung cancer. Might it not make sense then to conceal the problems associated with tobacco use in order to maximize the economic benefit?

The reality is that tobacco does kill, and most products that have a fatality rate like tobacco’s appear to be banned from the market. In 2003, 157,000 people died from lung cancer, and 80 percent to 90 percent of lung cancer is connected to tobacco use. Putting this in context, after the second baby died due to a questionable crib design, all 1 million cribs were recalled and the design discontinued.

Tobacco has a massive lobby and contributes a ton of cash — cribs not so much. Now, given the level of smoking going on (yes I know it is addictive) and the massive effort to inform people of the risks, it is clear a lot of folks choose to take the risk (or just figure it won’t happen to them).

Consider another example: On the chance that a baby formula had salmonella, it was recalled and destroyed, and as it turned out, it wasn’t contaminated. No one wanted to take the risk. Fifty-three thousand people die every year from second hand smoke — yet clearly, we still have smokers near children.

I’m not pounding on smokers. What I’m pointing out is that there appears to be a massive disparity in how we look at value of life and government’s role in protecting it. We saw this play out in Japan after the last tsunami and the failure of its aging nuclear plant. U.S. experts advised massive evacuations; Japan’s government officials did not concur, even though they were at least as knowledgeable — and millions were avoidably irradiated, which will likely spike cancer deaths there.

From a personal standpoint, I tried a new Mexican Restaurant a couple of weeks ago and was later told that it was in the middle of the highest-crime area in the city. I still would have gone, but I would have been more alert and likely would have parked someplace where I could keep an eye on my car. In short, I would have liked to have known the risk so I could make my own decision; this is as opposed to blindly taking a risk just because some bureaucrat wanted to ensure business revenue.

I’m a Red Pill kind of guy and I’d better be, because as an analyst, a good chunk of my job is pointing out risks that folks are trying to ignore. But this too is a choice and you may find you’re a Blue Pill kind of person. If you are, you’ll likely not want this Microsoft technology, and you’ll probably not want me to have it either. If you take that position, I’ll be opposed. For while I believe you have a right to give up your own choice, I don’t believe you have a right to take away mine.

I was a fan of the first Transformer, and I have since tried or used nearly every one of the first generation of Android tablets. I found them OK products, but the iPad pretty much dusted every one of them pretty easily. The problem was that earlier versions of Android either weren’t designed for tablets yet or felt rushed and the experience was less than ideal.

The first non-Apple tablet I truly enjoyed was the Kindle Fire, and that was because it was tightly focused and Amazon forked the code to create a unique user experience. 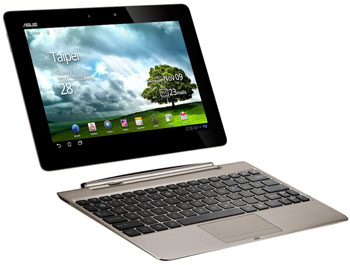 This new Transformer Prime addresses the problems with the earlier models nicely and still has the best keyboard option of any of the tablets. While it falls short of an Ultrabook in terms of real productivity, when it comes to things I’m more likely to use a tablet for — couch or bed browsing and shopping, watching video, playing casual games, or reading — this second-generation product is far closer to ideal.

The old Transformer had impressive battery life with the extra base battery, but it was a bit portly, and it often felt slow. This new product has been sped up. The screen is noticeably brighter (still not truly ideal for outdoor use but better than most), it is svelte, and it has a nice turned-metal finish (which unfortunately will scratch, something the old graphite finish avoided).

Most of the improvements, outside of the design, are due to the combination of Tegra 3 and Android Ice Cream Sandwich which is vastly better than Honeycomb. As a result, this is the strongest alternative to the iPad I have yet tested, and it showcases a platform that may be advancing faster than Apple’s (which is helping fuel a rumor that Apple will do an early iPad refresh next month).

By the way, one aspect of Android I’m beginning to love is how easy it is to migrate to new hardware. You simply log in to your Google account and, like magic, all of your apps show up on the new device. This is a feature I’ve suggested to Microsoft for decades. The Asus Transformer Prime is my latest tablet love — and as a result, it is also my product of the week. Hell, it even has a cool ad. After watching it, I wanted to buy a second one.